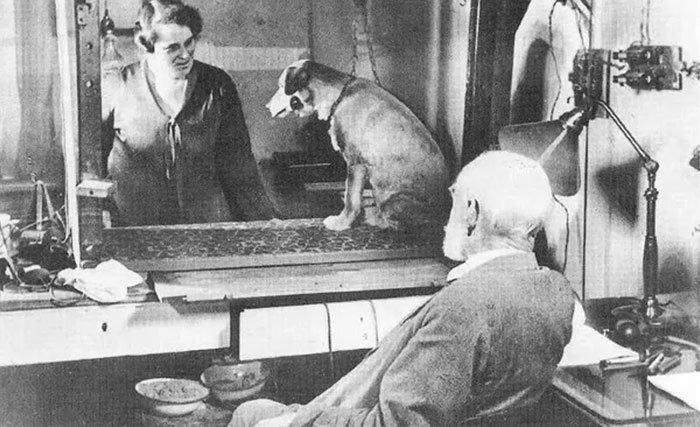 While Ivan Pavlov worked to unveil the secrets of the digestive system, he also studied what signals triggered related phenomena, such as the secretion of saliva. When a dog encounters food, saliva starts to pour from the salivary glands located in the back of its oral cavity. This saliva is needed in order to make the food easier to swallow, and also contains enzymes that break down certain compounds in the food.
Pavlov became interested in studying reflexes when he saw that the dogs drooled without the proper stimulus. Although no food was in sight, their saliva still dribbled. It turned out that the dogs were reacting to lab coats. Every time the dogs were served food, the person who served the food was wearing a lab coat. Therefore, the dogs reacted as if food was on its way whenever they saw a lab coat.
In a series of experiments, Pavlov then tried to figure out how these phenomena were linked. For example, he struck a bell when the dogs were fed. If the bell was sounded in close association with their meal, the dogs learnt to associate the sound of the bell with food. After a while, at the mere sound of the bell, they responded by drooling. The dogs had learned to associate the bell and the food and this learning created a new behaviour.
Pavlov's discovery was that environmental events that previously had no relation to a given reflex (such as a bell sound) could, through experience, trigger a reflex (salivation). This kind of learnt response is called conditioned reflex, and the process whereby dogs or humans learn to connect a stimulus to a reflex is called conditioning.
Открыть в размере экрана