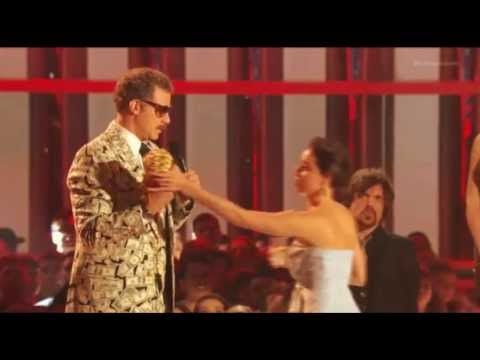 15 apr 2013 11:26
1093
2
1
Things got a little weird last night (April 14) at the MTV Movie Awards, when ‘Parks and Recreation’ star Aubrey Plaza channeled her inner Kanye West on Will Ferrell.
Ferrell was accepting the Comedic Genius award when the 28-year-old actress, seated in the front row, rushed the stage and gave a half-hearted attempt to take his award before walking back to her seat and spilling a drink on herself.
“Aubrey Plaza, everyone. Just like we rehearsed it. Perfect, it was perfect. Not too long, not too short. Right on the money,” Ferrell said, handling everything much better than Taylor Swift probably ever thought to.
Plaza, who starred in last year’s indie hit ‘Safety Not Guaranteed’ and plays April Ludgate on ‘Parks and Recreation,’ had ‘#TheToDoList’ — the name of her upcoming film with Andy Samberg — scrawled across her chest.

0
At first we thought the whole thing must have been planned (for starters, Plaza was in the front row while even Samuel L. Jackson was a row or two back). But apparently not, because shortly afterwards, MTV producers reportedly punted her from the venue.

Aubrey spilling her drink all over herself indicates alcohol was likely a factor here. Still, the incident was one of the most entertaining points in an otherwise dull show, and Aubrey and Will should work together more, because they’re actually kind of adorable in a bizarre way.

This morning, after a night of reflection, Plaza had this to say on Twitter (where she holds the unbelievably awesome handle of @evilhag):