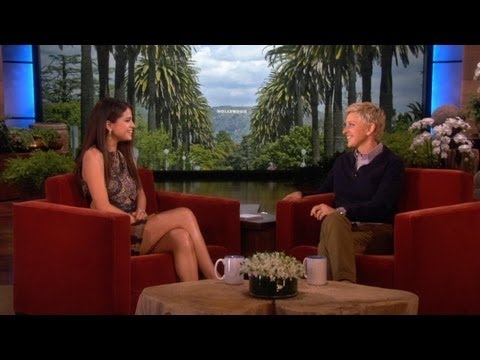 17 apr 2013 11:45
681
2
Selena Gomez infamously split from Justin Bieber and bragged about making him cry, but she kept it classy when Ellen DeGeneres asked her about the breakup this week.
You can thank Brad Pitt and Taylor Swift for that.
Gomez wouldn’t comment directly on her Bieber breakup, save to say, “I’m doing great — I met Brad Pitt!”
She was speaking about her run-in with the A-lister at the MTV Movie Awards, where she writhed around wearing a bindi and singing flatly but looked stunning. Pitt’s tykes are fans of Gomez on her Disney TV show, ‘The Wizards of Waverly Place,’ so he asked her for a photo … and she freaked out.
“I hid under the craft services table for like, two minutes,” she gushed. “I couldn’t believe it was happening.”
She revealed what she looks for in a man: someone who makes her laugh and is good to her parents. But she’s not getting asked out often at all, and that doesn’t bug her because she can hang out with Swift and their single friends and eat cake.
No, seriously. That’s what they do. And they call it the Lonely Girls Club. Swift’s tabloid headines will write themselves.