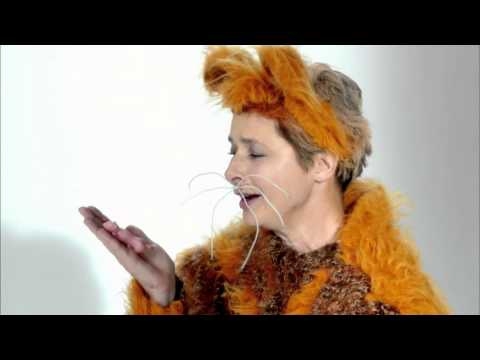 Isabella Rossellini Dresses Like a Hamster and Eats Her Babies.

Isabella Rossellini is back with her bizarre web series about the animal world. This time around, instead of exploring the world of sexual relations between insects, Rossellini has teamed up with Sundance yet again to make shorts about the joys of animal motherhood. This is the third installment in Sundance’s ‘Green Porno’ series, which is written by and stars actress Isabella Rosselini. Thankfully these vids don’t involve learning that lady bedbugs don’t have vaginas or that male bedbugs just impale them with their knife penises wherever they want. (You don’t even want to know how bees have sex.) In this first short, Rossellini — dressed like an old-timey prisoner — monologues about how if she were a hamster, she wouldn’t be put on trial, which immediately segues into her putting on a hamster costume and teaching us why hamsters eat their young in the first place. Hint: It has something to do with the amount of babies a mother hamster can logically feed, a need to boost nutrients after giving birth, and basically a logical decision to cull the weak babies from the fold. Nature is a cruel, cruel mistress. It would make more sense if just she offed the kids who were smart-mouthed.

MAMMAS: An all new web series by Isabella Rossellini