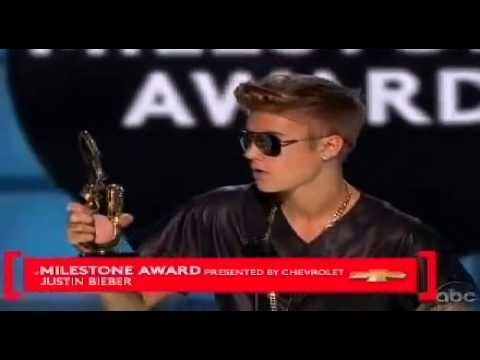 Justin Bieber Gets Booed, Asks for Respect During Billboard Awards

Justin Bieber was about to have a moment at the 2013 Billboard Music Awards last night (May 19) when he accepted the impressive Milestone Award at the tender age of 19 — but his acceptance of the coveted honor was marred by a chorus of boos and screams, the latter from his dedicated corps of Beliebers. Despite the outpuring of Belieber love, the vocal haters clearly knocked the normally confident and cocky teen off his game, as evidenced by his disjointed and responsorial speech. “I’m 19 years old,” he said, as if that were some sort of justification. “I think I’m doing a pretty good job.” No question there — but we weren’t the ones needing convincing. It sounded like the Biebs himself was on shaky ground. “From my heart, I really just want to say, it should be about the music, the craft that I’m making,” he declared from behind a pair of sunglasses. “This is not a gimmick. I’m an artist, and I should be taken seriously.” When you have to tell people you’re an artist and demand to be taken seriously, you know you have a real image problem. (Cue the late-night parodies.) After that “moment,” Biebs got to the thank yous: his “manager Scooter Braun, my family, my mom, Jesus Christ,” He also thanked fans and his siblings. For his part, awards host Tracy Morgan tried to put the haters in their place, scolding, “Don’t be booin’ nobody up in here. This ain’t the Apollo!”