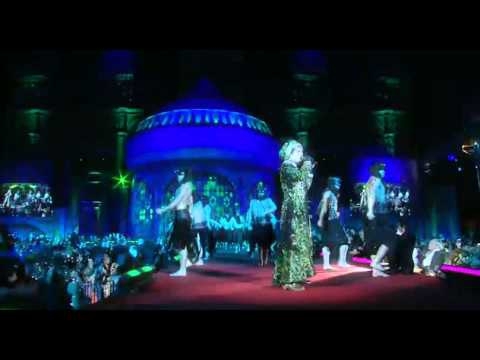 Adam Lambert Goes All Out Ali Baba for 2013 Life Ball

28 may 2013 12:02
3383
1
Open sesame!
Adam Lambert brought not just a new song, but also a new look to the 2013 Life Ball — and yes, it was scorching.
The Life Ball, which benefits Europe’s HIV and AIDS causes, was held in Vienna, Austria at the Hofburg Palace. The fete had a ’1,001 Nights’ theme, and Lambert took it very seriously.
The ‘Trespassing’ chart topper rocked an Ali-Baba style turban and intricately decorated harem pants and shirt, while flanked by lots of shirtless “thieves” — 40 to be exact.
Lambert performed an original track, written by himself as well as Martin Gellner and Werner Stranka, of the Beat4Feet production team, just for the ball. The song was titled ‘Love Wins Over Glamour.’ But in his case, it really looks like a tie to us.