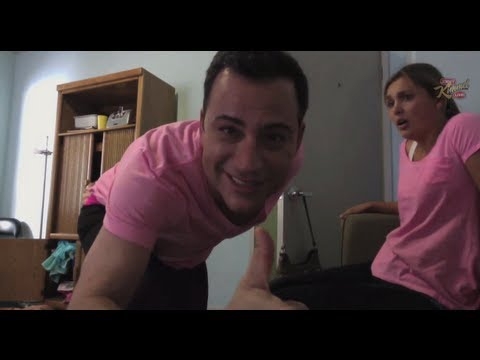 The Twerk Fail WAS A HOAX!

0
Looking back at the video now, there were a few signs that it was a setup. The picture quality of the video was quite clear, lit candles were set up right next to a bottle of alcohol, and the table seemed to collapse easily. Also before "Caitlin" eventually falls onto the table she's briefly holding up her weight in a hand stand. Then the video also cuts off abruptly, leaving the viewer wondering what happened to this poor girl after she caught on fire.

0
The video's description is also quite dubious "I tried making a sexy twerk video for my boyfriend and things got a little too hot :) WOW! Didn't expect all this attention. I'm fine. Just a little embarrassed!! THX!!". Had this event happened to anyone else surely they would have destroyed the video out of embarrassment!
What does it take to go viral? It seems like everything just has to go wrong (it also helps to have an attractive girl in the mix). Jimmy Kimmel set up a little experiment to test if this is true. He revealed he filmed the video depicting the ultimate twerking disaster two months ago and released it after Miley Cyrus' twerking debacle. The timing proved perfect, as the video popped up everywhere on the internet and eventually made its way to news stations.