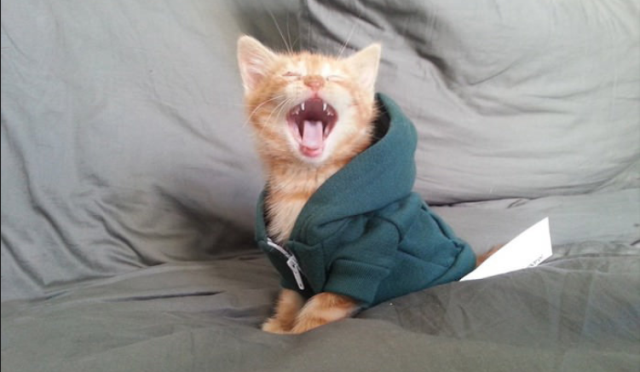 0
Смотреть все фото в галерее
One day of summer two years ago, a young man was playing video games with his brother. Then both decided to go to the shopping center to kill time. On the road, the two saw a little ball of fur all alone and starving. He’s not just sick but also completely blind because of eye infection.

The two humans tried to search for the mom but she was nowhere to be found. They decided to take the kitten with them and took the little critter to the vet.
One of the kitten’s rescuer said, “The veterinary told me that he’ ll probably die cause he was maybe
two weeks old and was so sick.. Challenge accepted.” It would be hard for them to just let the kitten die, so the two humans decided they will try to make it all work to save the tiny ginger kitty.

0
They took care of him and named him Gotham.

0
He started to open his little eyes after a long care, eye-drops, warm towels, antibiotics and more TLC.

0
Gotham was really weak and shy…

0
He started to open his little eyes after a long care, eye-drops, warm towels, antibiotics and more TLC.

0
He’s starting to recover and eats like a champ.

0
He burns one of his nine lives.

0
His face of disappointment..