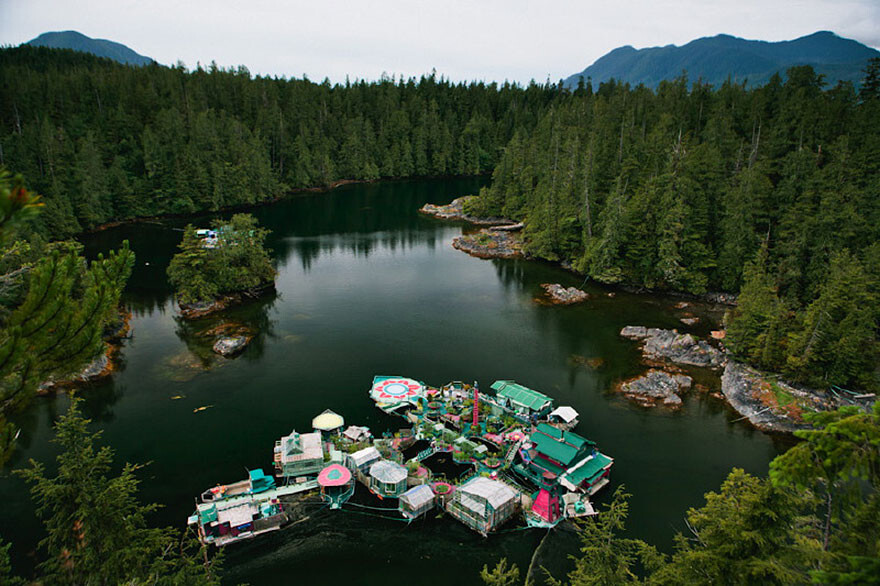 28 apr 2015 09:41
Tags: floating   island
0
13
This floating fortress of sustainable living floating on the coast of Vancouver Island British Columbia goes to show just how wonderful a sustainable life off the grid can be. Wayne Adams, 66, and Catherine King, 59, built this floating home together in 1992, and have been growing and fishing for their own food ever since. 0
Смотреть все фото в галерее
The home, which they’ve named “Freedom Cove,” consists of 12 floating platforms that include a dance floor, an art gallery, a guest lighthouse, a studio for Adams and King, and 5 greenhouses. The settlement has half an acre of land for growing edible crops. The couple gets water from a nearby waterfall during the summer and from rainwater during the winter. The settlement had been powered by an array of 14 solar panels, but recently switched to a generator after these broke down. 0
When they aren’t working on their sustainable lifestyle, they still manage to keep busy; during the summer, visitors come from nearby Tofino to experience the family’s sustainable lifestyle. Adams is also a carver, while King is a painter, dancer, writer and musician. 0
They get food from half an acre of gardening space 0
Wayne Adams is a carver who supports the couple by selling his sculptures carved out of wood, fossilized ivory and mammoth tusk This Kitchen Island Is Also A Giant Aquarium An Englishman makes floating home out of recycled plastic bottles