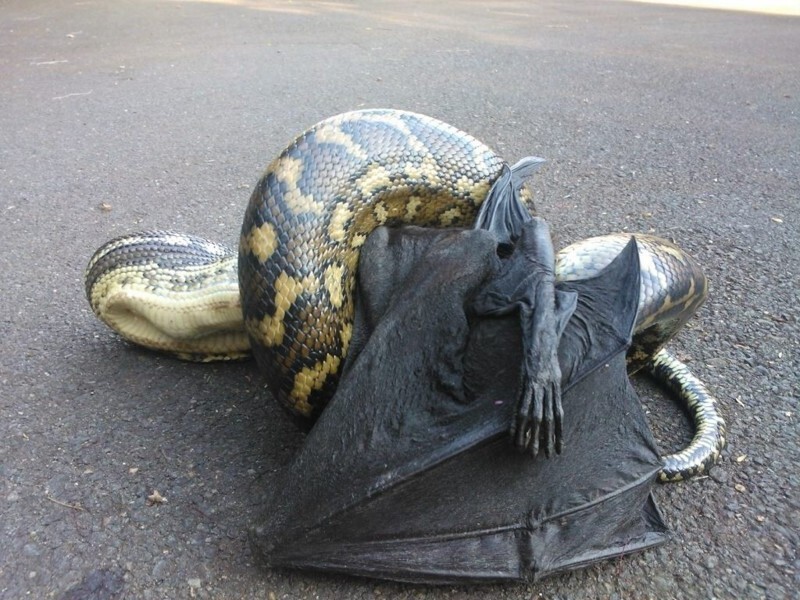 1) Pythons will eat everything. EVERYTHING.

2) Pythons grow to be so big they can lift a wallaby.

4) Snakes can climb up your toilets. No joke

5) The snakes there can eat other, bigger reptiles

6) You really need to understand that snakes are everywhere.

9) Dingos are dangerous. Even to sharks.

10) But sharks threaten everyone else.

12) Surfers should also watch out for crocodiles.

13) Then again, most people should watch out for crocodiles.

15) But just to keep some perspective, even the crocodiles are eaten by snakes.

17) And humans are food for the ticks.

18) Not to mention all of the other bugs that live there. Like lots and lots of spiders.

19) This is a bucket of funnel web spiders found at a campsite. Each of them can deliver a fatal bite.

20) The spiders aren’t the only problem. Soldier beetles also swarm.

23) These don’t swarm, but there are giant earthworms.

24) These are mole crickets. They are terrifying

26) There are cassowaries, which are giant, awful birds.

27) Giant jellyfish are a thing that just show up.

28) But if you don’t like the big jellyfish, there are Irukandji jellyfish. They are 100x more poisonous than cobras.

30) Don’t worry, there are other dangerous sea creatures. Blue ringed octopi are extremely venomous with no known anti toxin.

32) Oh, and have you ever heard of stonefish? They are the world’s most venomous fish.

0
And THIS is what they can do to you.

33) Even if you stay out of the waters, death can come from above in form of hail

34) Oh, the freshwater swimming holes are pretty scary, too