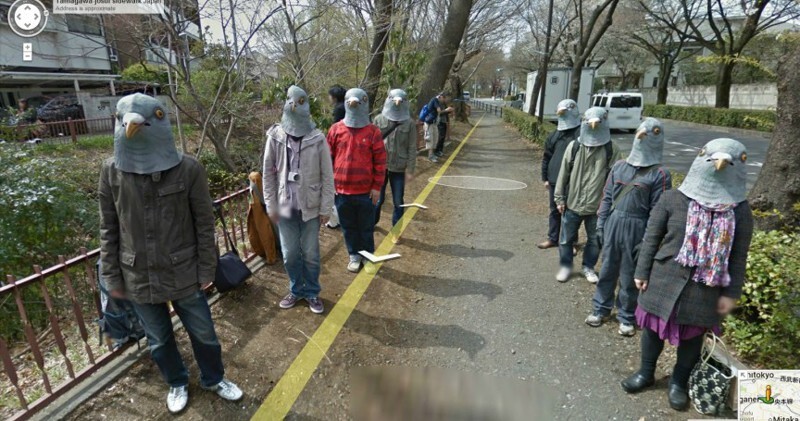 10 Of The Strangest Things Seen On Google Street View

02 sep 2015 10:30
Tags: google   pic   strange
0
11
Google Maps and other similar services are technologies that have grown exponentially in the last couple of years. Prior to their invention, those who wanted to get directions to a specific location in the near future would have to either get a physical map or use a special satellite navigation system. That has all changed now though, as a simple click of a few buttons on a keyboard now allows users to go on the internet and get directions almost immediately to any destination. They can then use this information by printing it or using their smartphones and tablets while travelling. Sometimes the cameras capture unexpected or downright odd photographs because people were unprepared for the vehicle’s arrival (or the very opposite). Regardless of the reason behind the picture, Google Street View is littered with bizarre and strange images from all over the world. 0
Known as Horse Boy, for reasons that you can probably notice almost immediately, this man has been seen in various Google Street View images since 2010. He was first noticed in the Hardgate area of Aberdeen in Scotland. With his bright purple jumper, dark trousers and rubber horse head, the man has become famous on the internet for his wacky appearance and the fact that he seemed to be able to get himself in a large number of photographs on the service. His identity has never been revealed but many people have claimed to know who he is, although they have never said why he walks around in a horse’s head. 0
In 2014, users of Google Street View noticed a particularly gruesome scene at a location in Edinburgh. The image shows one man lying on the floor apparently dead while another is seen wielding a large axe. One concerned user informed the police who went to investigate, finding the two people responsible at a local garage. The two mechanics had apparently seen the car used by Google in the area and had staged the event as a practical joke for when it came down the street where their garage is located. Having posed for the photograph in 2012, they had completely forgotten about it by the time it was uploaded months later. 0
This picture has everything that is necessary for comedy gold. Firstly, the man in question is riding a notoriously over-sized and hard to control penny-farthing, a bicycle that was last popular in the late 1800s. It’s certainly not something that you traditionally see modern cyclists riding around on. Secondly, and most importantly, the man appears to have attached a device to his bike that allows him to carry a small plush penguin around with him wherever he goes. It’s not clear exactly why the man is taking the penguin with him on his journey, but you’ve got to admire his dedication regardless of the reason. 0
Sometimes pranks can get out of hand, especially if a particular prank war has been escalating for some time and hasn’t yet reached the stage where people begin to get arrested. A common target for pranks are people’s cars, after all they are generally much loved possessions that are essential to everyday life. In this case, a Google car captured the moment when a person seems to have discovered that someone had completely covered their vehicle in post-it notes, not just causing a hilarious inconvenience, but also ensuring the moment is saved on the internet forever. 0
This rather creepy photograph was taken by a Google Street View car in Musashino, a small town near Tokyo in Japan. It shows eight people dressed normally, except for the large bird masks on their heads. Although it’s difficult to tell, it looks like they are pigeon masks but it is even more unclear exactly what is going on here. Were these people simply going about their daily business and just happened to be seen by the car? Or did they know it was coming and decide to do something funny that they would be able to show their friends? We might never find out. 0
It’s not unusual for Google Street View to occasionally capture moments of intimacy between people who are unaware that the car is passing by, but it is a lot rarer for it to see the exact opposite. That is exactly what happened here though, when a car took a photograph showing the depressing moment that a woman was being kicked out of a house by her partner along with all of her possessions. While it is pretty easy to work out what is going on here, as no one would throw all the stuff on the sidewalk for no good reason, comments on Reddit later confirmed exactly what had happened.

4. A Thief In Action 0
After having their caravan stolen from their home in 2009, the Soames family assumed that they would never be able to find the culprit or get their caravan back after police were unable to find any clues or suspects. However, several years later they found an image on Google Street View that was taken on the day of the theft that showed a man with an SUV parked on their driveway. Thinking that this suspicious man may be the person who stole the caravan, they got back in touch with police who also shared their concerns and have since released the photograph to the public in the hopes of tracking him down. 0
It’s difficult to tell whether this is a real skull or simply a fake one that has been placed on the side of the road. What is clear though, is the fact that this is certainly very strange and a little bit creepy. Finding what looks like a human skull in the middle of an empty field with what looks like no buildings in sight, must be a pretty scary experience and let’s just hope that the guy who was trawling through Google Street View and came across this particular image wasn’t in his house alone, sitting in the dark. 0
This image, along with several others, were found by users on Reddit who noticed that the entire town in New Baltimore, New York, seemed to have been pulled straight out of a horror movie. Google Street View had several photographs of a number of streets that all showed the same misshapen and discolored houses and buildings, as if the entire town was haunted. The most likely explanation is that the camera was simply malfunctioning at the time of the photos, as more updated versions of the location don’t suffer from the same problems. 0
It’s probably best not to ask what this man wearing a gas mask is doing all alone in the woods. Whatever the case, he appears to have been startled by the Google Street View car that was passing by at the time. That’s probably just because he was just enjoying a nice relaxing quiet stroll through a park. He almost certainly was not working on some secret experiment or committing a horrible crime and was disturbed; at least we hope that wasn’t the case.