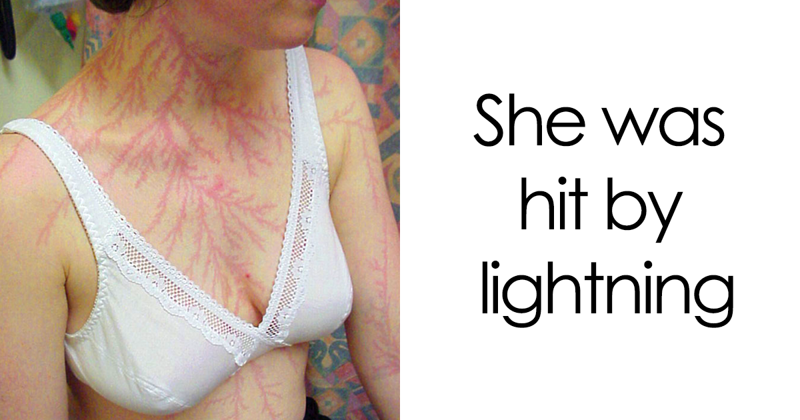 13 aug 2018 11:03
Tags: figure  lightning  people  photo  scar  strike  surval
900
24
The odds of getting struck by lightning in any given year are about 1 in 300,000. And although roughly 90% of those struck survive, the electrical discharge scars some of them with a tattoo-like mark, known as the Lichtenberg figure. But that’s not all. A lightning bolt can heat the surrounding air to 27,760 degrees Celsius – which is five times hotter than the sun – and can contain up to 1 billion volts of electricity.

The odds of getting struck by lightning in any given year are about 1 in 300,000

And although roughly 90% of those struck survive, the electrical discharge scars some of them with a tattoo-like mark

It is known as the Lichtenberg figure

A lightning bolt can heat the surrounding air to 50,000 degrees Fahrenheit (27,760 degrees Celsius)

This is five times hotter than the sun

When this amount of energy enters your body, it short-circuits the small electrical signals that run the heart, lungs, and nervous system

The blistering heat, light, and electricity can also damage your eyes

For example, it can bore holes in your retina and cause cataracts (cloudings of the lenses)

Unfortunately for men, lightning can also induce impotence and decrease libido in general

When it forces the red blood cells out of your capillaries

Ironically, the man is an electrician

“I went outside to save my pumpkins. After that, I was going back inside”

“I just know it struck in our neighbor’s backyard, and it was bright and loud. I didn’t feel anything”

“I just came back inside like nothing was wrong. Umm…my arm was sore. <…> [It was] maybe an hour before I saw the marks”

“A few hours after it happened it really started to bother me. The next day it was bad. The blisters started forming; they were really big” They kept on growing for a week!

Lightning strikes the United States about 25 million times a year

And they can also engrave fields of grass

So golf courses can really highlight these Lichtenberg figures 39 Of The Worst Hotel And Airbnb Guests Ever "Living In China I See The Most Ridiculous Things"
We need to be sure you are not a bot. Type the characters you see in the picture below.
Обновить