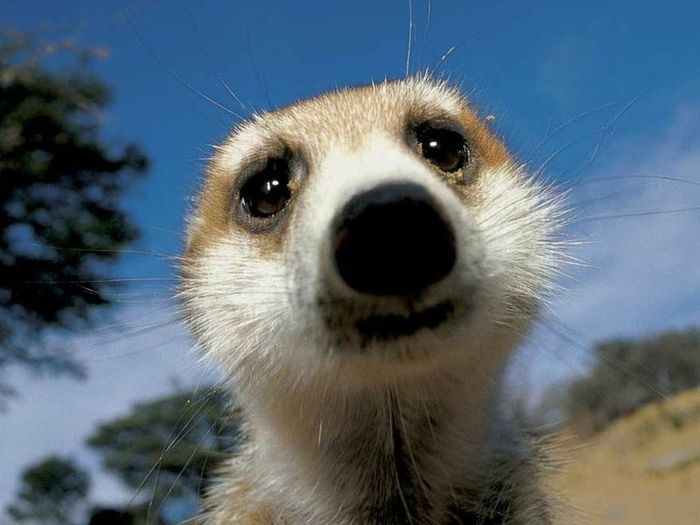 11 dec 2012 05:49
701
20
The meerkat or suricate, Suricata suricatta, is a small mammal belonging to the mongoose family. Meerkats live in all parts of the Kalahari Desert in Botswana, in much of the Namib Desert in Namibia and southwestern Angola, and in South Africa. A group of meerkats is called a "mob", "gang" or "clan". A meerkat clan often contains about 20 meerkats, but some super-families have 50 or more members. In captivity, meerkats have an average life span of 12–14 years, and about half this in the wild. 0
Смотреть все фото в галерее
"Meerkat" is a loanword from Afrikaans. The name has a Dutch origin but by misidentification. Dutch meerkat refers to the "guenon", a monkey of the Cercopithecus genus. The word "meerkat" is Dutch for "lake cat", but the suricata is not in the cat family, and neither suricatas nor guenons are attracted to lakes; the word possibly started as a Dutch adaptation of a derivative of Sanskrit markaţa मर्कट = "monkey", perhaps in Africa via an Indian sailor on board a Dutch East India Company ship. The traders of the Dutch East India Company were likely familiar with monkeys, but the Dutch settlers attached the name to the wrong animal at the Cape. The suricata is called stokstaartje = "little stick-tail" in Dutch.
According to African popular belief (mainly in the Zambian/Zimbabwean region), the meerkat is also known as the sun angel, as it protects villages from the moon devil or the werewolf which is believed to attack stray cattle or lone tribesmen. 0
The meerkat is a small diurnal herpestid (mongoose) weighing on average about 731 grams (1.61 lb) for males and 720 grams (1.6 lb) for females. Its long slender body and limbs give it a body length of 25 to 35 centimetres (9.8 to 14 in) and an added tail length of 17 to 25 centimetres (6.7 to 9.8 in). Its tail is not bushy like all other mongoose species, but is rather long and thin and tapers to a black or reddish colored pointed tip. The meerkat uses its tail to balance when standing upright, as well as for signaling. Its face tapers, coming to a point at the nose, which is brown. The eyes always have black patches around them and it has small black crescent-shaped ears that can close to exclude soil when digging. Like cats, meerkats have binocular vision, a large peripheral range, depth perception, and eyes on the front of their faces.
At the end of each of a meerkat's "fingers" is a non-retractable, strong, 2 centimetres (0.79 in) long, curved claw used for digging burrows and digging for prey. Claws are also used with muscular hindlegs to help climb trees. Meerkats have four toes on each foot and long slender limbs. The coat is usually fawn-colored peppered with gray, tan, or brown with a silver tint. They have short parallel stripes across their backs, extending from the base of the tail to the shoulders. The patterns of stripes are unique to each meerkat. The underside of the meerkat has no markings, but the belly has a patch which is only sparsely covered with hair and shows the black skin underneath. The meerkat uses this area to absorb heat while standing on its rear legs, usually early in the morning after cold desert nights. 0
Meerkats are primarily insectivores, but also eat lizards, snakes, scorpions, spiders, plants, eggs, small mammals, millipedes, centipedes and, more rarely, small birds. Meerkats are immune to certain types of venom, including the very strong venom of the scorpions of the Kalahari Desert, unlike humans.[2] They have no excess body fat stores, so foraging for food is a daily need.
Meerkats forage in a group with one "sentry" on guard watching for predators while the others search for food. Sentry duty is usually approximately an hour long. A meerkat can dig through a quantity of sand equal to its own weight in just seconds.[3] Baby meerkats do not start foraging for food until they are about 1 month old, and do so by following an older member of the group who acts as the pup's tutor.[4] The meerkat standing guard makes peeping sounds when all is well. If the meerkat spots danger, it barks loudly or whistles. 0
Meerkats become sexually mature at about one year of age and can have one to five pups in a litter, with three pups being the most common litter size. Wild meerkats may have up to four litters per year. Meerkats are iteroparous and can reproduce any time of the year but most births occur in the warmer seasons. The pups are allowed to leave the burrow at three weeks old. When the pups are ready to emerge from the burrow, the whole clan of meerkats will stand around the burrow to watch. Some of the adolescents might try to show off so they can have more attention than the pups.
There is no precopulatory display; the male ritually grooms the female until she submits to him and copulation begins, the male generally adopting a seated position during the act. Gestation lasts approximately 11 weeks and the young are born within the underground burrow and are altricial (undeveloped). The young's ears open at about 15 days of age, and their eyes at 10–14 days. They are weaned around 49 to 63 days. They do not come above ground until at least 21 days of age and stay with babysitters near the burrow. After another week or so, they join the adults on a foraging party. 0
Usually, the alpha pair reserves the right to mate and normally kills any young not its own, to ensure that its offspring has the best chance of survival. The dominant couple may also evict, or kick out the mothers of the offending offspring.
New meerkat groups are often formed by evicted females pairing with roving males.
If the members of the alpha group are relatives (this tends to happen when the alpha female dies and is succeeded by a daughter), they do not mate with each other and reproduction is by group females stray-mating with roving males from other groups; in this situation, pregnant females tend to kill and eat any pups born to other females. 0
Meerkats are small burrowing animals, living in large underground networks with multiple entrances which they leave only during the day. They are very social, living in colonies averaging 20–30 members. Animals in the same group regularly groom each other to strengthen social bonds. The alpha pair often scent-mark subordinates of the group to express their authority, and this is usually followed by the subordinates grooming the alphas and licking their faces. This behavior is also usually practiced when group members are reunited after a short period apart. Most meerkats in a group are all siblings or offspring of the alpha pair.
Meerkats demonstrate altruistic behavior within their colonies; one or more meerkats stand sentry while others are foraging or playing, to warn them of approaching dangers. When a predator is spotted, the meerkat performing as sentry gives a warning bark, and other members of the gang will run and hide in one of the many bolt holes they have spread across their territory. The sentry meerkat is the first to reappear from the burrow and search for predators, constantly barking to keep the others underground. If there is no threat, the sentry meerkat stops signaling and the others feel safe to emerge. 0
Meerkats also babysit the young in the group. Females that have never produced offspring of their own often lactate to feed the alpha pair's young, while the alpha female is away with the rest of the group. They also protect the young from threats, often endangering their own lives. On warning of danger, the babysitter takes the young underground to safety and is prepared to defend them if the danger follows. If retreating underground is not possible, she collects all young together and lies on top of them.
Meerkats are also known to share their burrow with the Yellow Mongoose and ground squirrel, species with which they do not compete for resources. If they are unlucky, sometimes they share their burrow with snakes. Like many species, meerkat young learn by observing and mimicking adult behaviour though adults also engage in active instruction. For example, meerkat adults teach their pups how to eat a venomous scorpion: they will remove the stinger and help the pup learn how to handle the creature.
Despite this altruistic behaviour, meerkats sometimes kill young members of their group. Subordinate meerkats have been seen killing the offspring of more senior members in order to improve their own offspring's position. Meerkats have been known to engage in social activities, including what appear to be wrestling matches and foot races. 0
A meerkat group may die out because of predator attack, its alpha pair being unable to breed, starvation due to drought, or epidemic disease.
A new meerkat group often arises from evicted females meeting and staying with roving males, seeking to mate. The litter size is usually 2–5 pups.
The size of the groups is variable. A group which becomes over-large may routinely have to disperse widely to find enough food when foraging. As a result, when suddenly needing to run for shelter, members of the group may choose different holes, resulting in the group fissioning.