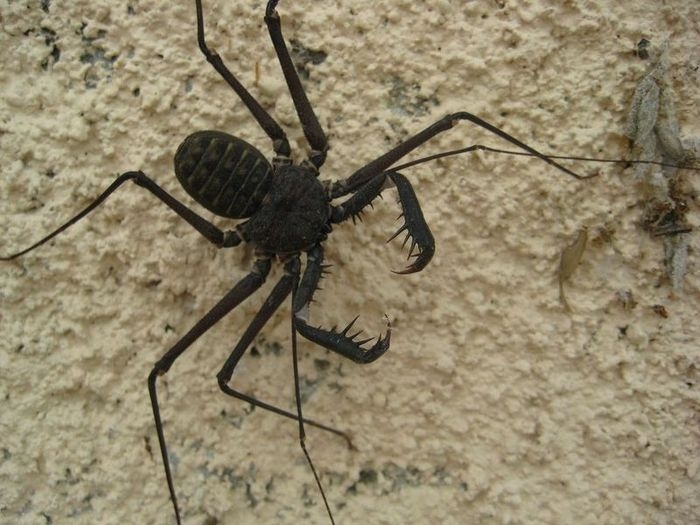 18 jan 2013 06:03
483
21
Amblypygi is an order of invertebrate animals belonging to the class Arachnida, in the subphylum Chelicerata of the phylum Arthropoda. They form a separate order of arachnids alongside the spiders, scorpions and others.
Native to New Zealand and Australasia.
Amblypygids are also known as whip spiders and tailless whip scorpions (not to be confused with whip scorpions that belong to the Arachnid order Thelyphonida). The name "amblypygid" means "blunt rump", a reference to a lack of the telson ("tail") carried by related species. Despite an offputting appearance, they are harmless to humans. 0
Смотреть все фото в галерее
By 2003, 5 families, 17 genera and around 155 species had been discovered. They are found in tropical and subtropical regions worldwide. Some species are subterranean; many are nocturnal. During the day, they may hide under logs, bark, stones, or leaves. They prefer a humid environment. 0
Amblypygids range from 4 to 10 inches (10 to 25 cm) in size, including legspan. Their bodies are broad and highly flattened, with a solid carapace and a segmented abdomen. They have a pair of median eyes at the front of the carapace, located just above the chelicerae in a manner somewhat similar to crustaceans, and three smaller eyes placed further back on each side, for eight eyes in total.
Amblipygids possess medium to poor eyesight, however their pedipalps, which serve as sensors for many akin arachnids, are modified and inward-adapted for grabbing and retaining prey, much like those of a praying mantis. The first pair of legs are also modified and act as sensory organs, while the animal uses the other six legs for walking. The sensory legs are very thin, have numerous sensory receptors, and can extend several times the length of body. Typically, the animal holds one of these legs out in front of it as it moves, and uses the other to probe the terrain to the side.
Amblypygids possess no silk glands or venomous fangs, however their chelicerae do eject a digestive acidic enzyme, unlike those of sun spiders, for example. They rarely bite if threatened, but can grab fingers with pedipalps, resulting in thorn-like puncture injury. 0
Amblypygids often move about sideways on their six walking legs, with one "whip" pointed in the direction of travel while the other probes their other sides. Prey are located with these "whips", captured with pedipalps, then masticated with chelicerae.
Courting rituals involve the male depositing stalked spermatophores, which have one or more sperm masses at the tip, onto the ground, and using his pedipalps to guide the female over them. She gathers the sperm and lays fertilized eggs into a sac carried under the abdomen. When the young hatch, they climb up onto the mother's back; any which fall off before their first moult will be eaten by the mother.
Amblypygids, particularly the species Phrynus marginemaculatus and Damon diadema, are thought to be among the few examples of arachnids which show signs of social behavior. Research conducted by entomologists at Cornell University suggests that mother amblypygids communicate with their young by caressing the offspring with her anteniform front legs, and that the offspring reciprocate both with their mother and their siblings. Further, in an experiment where two or more siblings were placed in an unfamiliar environment, such as a different cage, they would seek each other out and gather back into a group.

0
Amblypygids like to be in tight, dark spaces. A ten gallon tank or critter keeper is enough space for a single individual, although a breeding pair will need more room, and an individual from a more diminutive species can be kept in a smaller tank. The bottom of the tank should be covered with around an inch to an inch and a half of a substrate that can absorb water. This should be kept moist at all times. Potting soil that does not contain fertilizer works best to retain water and keep up the humidity in the tank. Amblypygids moisture needs are the most sensitive; if exposed to relatively short periods of dryness they will die.
Large pieces of cork bark should be placed as close to the sides of the tank as possible, to give the animal a tight space in which to hide. Amblypygids are nocturnal, so the tank should be placed on a shelf with solid sides or enough cork bark positioned around the tank so that the animal can be hidden from view. A wire mesh top should also be used, to give the animal another purchase from which to molt. 0
Amblypygids will consume any sort of insect prey. The size of the insect to be fed should be judged in accordance to the individual animal; in general, do not feed anything much larger than the amblypygid’s abdomen. Like most arachnids, amblypygids only need to be fed once a week, and can go for two or three weeks without food, although this is not advisable. If the animal is molting, ready to molt, or has just molted, they should not be fed. Prey should also be removed if it is left untouched for more than a day.
Substrate should be kept moist and needs to be watered down every one to two days. Standing water in the tank will not hurt an amblypygid, although wetting the soil is all that is necessary, and certain desert species should be kept drier than that. Lack of humidity will kill an amblypygid much quicker than lack of food, so watering is crucial to care. 0
Like any other arachnid, molting is the most dangerous moment in an amblypygid’s life. The tank should be kept especially moist during this tricky time, and if an animal is struggling giving it a single spray of water from a misting bottle can help. There should also be enough cork bark in the tank for the animal to hang on, and a wire mesh top is good for molting as well. 0
A mature female and mature male should be placed together shortly after the female has molted. If the female is near to a molt when placed with a male, even if successfully mated, she will molt and lose the eggs. The male should not be close to molting either.
The most important step in breeding amblypygids is to place their cage in a place where it will not be jostled or disturbed. Amblypygids are very sensitive to vibrations, and if bothered while in the courtship period may not be receptive to one another. Pregnant mothers should also be kept undisturbed, especially in the first week after the eggs hatch; if newly emerged young fall off their mother’s back they will not survive. Place the tank with the male and female in a location where no one will bump the tank, table, or come too close. 0
During the courtship period, the male and female will be in close contact. After courtship is ended, the pair will become disinterested in one another, and the male can be removed from the tank. If the male and female are no longer in close contact, and are resting in different sections of the tank for more than a day, then the courtship period has come to a close. The female will be very aggressive while carrying her brood sac, so be sure to be extra cautious when removing the male. The female should be undisturbed throughout the time she is carrying her brood sac. She may be fed during this time, but after the young have hatched feeding should cease until they have completed their first molt. Babies can be fed flies after they come down from their mother’s back, and in subsocial species can be kept together in the same container for around three months. Mother amblypygids are notoriously testy and should be treated with extreme caution, because they will not hesitate to attack if they feel their young are threatened.
Aside from their extreme sensitivity to vibrations and disturbances, amblypygids are fairly easy to breed. The most crucial step in the process is to make sure that the container in which the mating pair is placed is in an isolated area where they will not be disturbed.