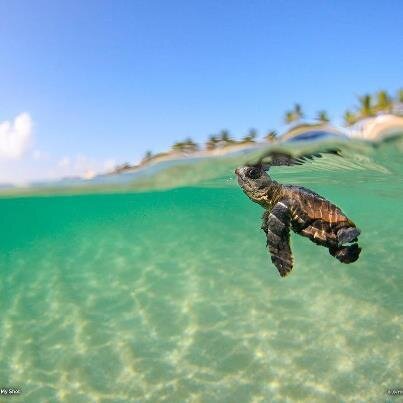 50% of these little creatures die even before they get from the sand to the ocean waters eaten by crabs, birds and other predators. The survived ones get to the waters to only begin their 8000 miles journey around the North Atlantic basin.

Young loggerheads that survive this incredible migration will return to the coastal waters of North America in about 6 to 12 years — only after they have grown too large to be eaten by most types of predatory fish and birds that populate coastal waters.

The migrations of young loggerhead turtles take them into the relative safety of the open ocean where predators are less abundant than in coastal waters. The journey is among the longest and most spectacular migrations in the animal kingdom. The turtles begin as utterly defenseless, two-inch-long hatchlings — the odds stacked heavily against them.

Able to swim at maximum speeds of only about half a mile an hour, and unable to dive, young turtles slowly swimming along the ocean’s surface can’t evade most predators. Most do not survive. Only about one in 4,000 Florida hatchlings reaches adulthood.