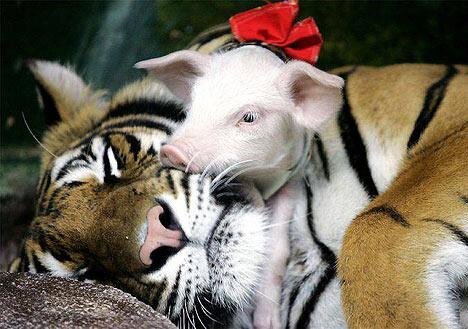 Tiger Adopts Piglets as Her Own Kids (7 photo + 1 video)

After recovering from a tough delivery, this tigress started losing her mental health. Physically she was completely in shape, but her behaviour had gotten strange. Vets said the loss of her babies had caused her a type of large cat depression. The only solution was to surrogate some new cubs.

After checking with many other zoos across the country, the depressing news was that there were no tiger cubs of the right age to introduce to the mourning mother. The veterinarians decided to try something that had never been tried in a zoo environment.Sometimes a mother of one species will take on the care of a different species. The only orphans" that could be found quickly, were a litter of weaner pigs. The zoo keepers and vets wrapped the piglets in tiger skin and placed the babies around the mother tiger.