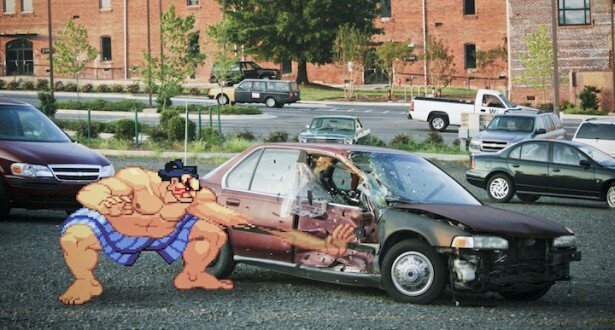 It's happened to us all. Lord knows it. You've been staring at a screen, drooling, jabbing for hours at a joypad when your delirious little mind feeds you a dream where your video game world converges with real life.

Graphic designer Aled Lewis has taken this idea one step further. His genius pics show what would happen if the (usually pretty distinct) line between games and real life disappeared.

Check out the reckless carnage Honda would cause, the mindless joyride Bowser would enjoy and the long, dramatic walk that Link would take.

Although the images work as just being pretty damn awesome, Aled also wants them to "evoke the popular discourse about video games being a distraction from real life." Ultimately though, our main thought is total, bittersweet, "where have all the years gone?" nostalgia.

"It obviously has strong nostalgic appeal for a lot of people," Aled admits. "The characters and games featured in this series represent my favourite games growing up and this aesthetic has really come to represent that time.

"As a kid I would become completely immersed in these crude pixel environments and they would seem very real. I thought it would be fun to try to capture that to express how gamers see these worlds."