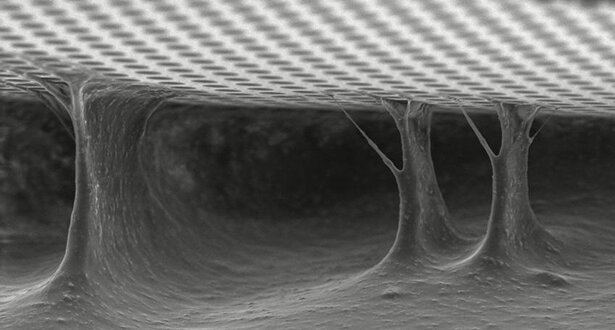 Naked bodies appear to frolic on a beach, a frog happily perches on a hill and a kangaroo bounds across the landscape.

These are some of the familiar - and bizarre - sights scientists have seen under the microscope.

These images were entries in the recent International Symposium on the Physical and Failure Analysis of Integrated Circuits in Singapore.

The annual photography competition sees eggheads showing off the fun side of their research in microelectronics technology.

The analysts work on 'failure analysis', the process of investigating why a particular electronic component fails to work.

The winning image, entitled People on the Beach by Lim Saw Sing at Infineon Technologies, depicts a polyimide surface after exposure to reactive ion etching and sputter coating. In reality, it looks uncannily like a saucy beach scene with dozens of cavorting couples.

Second prize was Wings by Foo Fang Jie at Advanced Micro Devices which sees fracture analysis of a silicon sample resembling a pair of wings. Third prize The Hope Terrace by Tan Lee Koon at Systems-on-Silicon Manufacturing Co. is a picture of wafer-edge chipping giving the effect of step-like spectacular landforms.

Other highlights included a 'Royal Elephant' on a silicon sample, a particle embedded in a metal layer resembling a tortoise in water and a 'Fist of Victory' highlighted by an image showing the nano fabrication capability of a FIB (Focused Ion Beam).

The competition was run by the IEEE (Institute of Electrical and Electronics Engineers), the professional association for "the advancement of technology". The rules state: "The main judging criterion would be the aesthetic aspect of the image rather than its technical quality to be in line with the theme of the contest. Nevertheless, the image must be related to failure analysis." 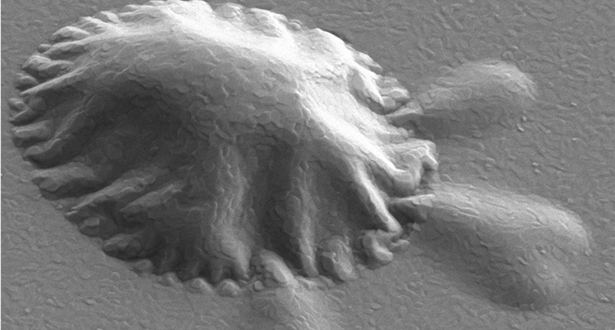