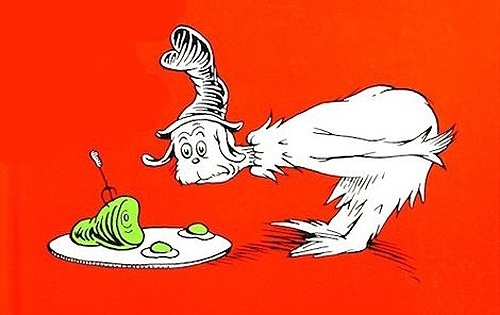 0
Смотреть все фото в галерее
Several of our favorite children's books may never have been had Theodor Seuss Geisel not accepted a bet from his editor Bennett Cerf. Cerf dared Seuss to write a book using only 50 words. The result: "Green Eggs and Ham." 0
While struggling to make ends meet playing small uncredited TV roles, a young Harrison Ford decided to pick up carpentry jobs on the side. Ford landed his first major role in "American Graffiti" after building cabinets for director George Lucas. Lucas also cast Ford as one of his most well known characters, Han Solo.

The Day The Music Died... Because Of Dirty Underwear 0
While on tour in February of 1959, Buddy Holly ran out of clean underwear. Like any sensible rock and roll legend, Buddy decided to charter a plane to their next gig location to get there before the tour bus in order to have time to wash his clothes. Buddy was joined by Big Bopper Richardson who was sick with the flu and Ritchie Valens who wanted to see the inside of a small plane. We all know what happens next... 0
That's right, If the Mayflower had only been loaded up with a couple more 30-racks, we never would have learned about those friendly pilgrims landing at Plymouth Rock. The Mayflower was headed for the Hudson when its taps ran dry and had to pull over. Why beer? Why not! Also, it was much safer to drink than water because it was boiled. 0
After WWII, Percy LeBaron Spencer, a radar technician, was working on a new device know as a magneton when he realized the chocolate bar in his pocket was melting. He was a known sweet tooth and realized that this melting wasn't the result of just body heat. LaBaron worked with the technology and eventually developed the first six foot, 750 pound microwave.

0
While living in a trailer in Maine, Stephen King began writing a short story on his wife's portable typewriter. Unhappy with what was coming out, King threw out the three pages he had typed. His wife dug the pages out of the garbage and told him to keep writing. Well done, Mrs. King, these three pages turned into Kings first published novel "Carrie." 0
Jeff Foxworthy was gitten' 'er done as an IBM computer maintenance engineer before he was a household name standup comedian. Foxworthy was dared by his fellow IBM colleagues to enter a standup competition on Atlanta, and the rest is redneck history. 0
Before bombing Japan during WWII, the US had a detailed report of the top five cities to target with the explosives. Number one on the list was Kyoto, where the Japanese emperor lived. So why didn't Kyoto get the bomb? Because Secretary of War Henry L. Stimson honeymooned in Kyoto and thought it was a rather pleasant place.

The Japanese emperor, who survived the blasts, later went on to surrender the war despite a strong opposition within the country to keep fighting. Had the Emperor been killed, who knows how long WWII may have lasted.