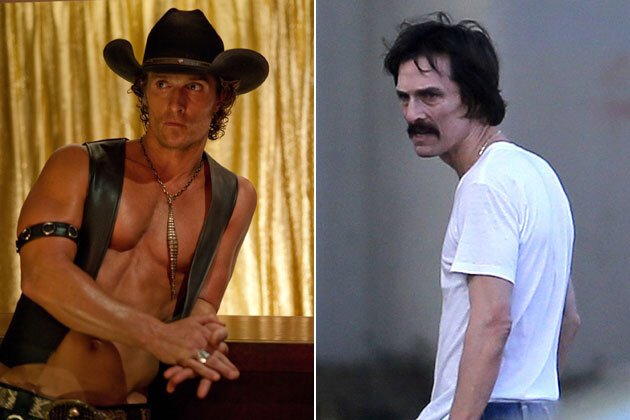 It’s always a bit of a shocker to hear what some actors are willing to endure in the name of “authentic performances,” whether it’s chopping off all their hair, sitting in a makeup chair for hours on end, or, in extreme cases, submitting to unorthodox dieting habits.

Movie transformations have recently come back to the forefront in light of films like ‘Les Miserables,’ ‘Cloud Atlas‘ and ‘Looper.’ While Anne Hathaway and Hugh Jackman have both admitted to extreme dieting habits to convey the physical embodiment of death, others, like Tom Hanks and Joseph Gordon-Levitt, have succumbed to hours upon hours of costume and makeup work. 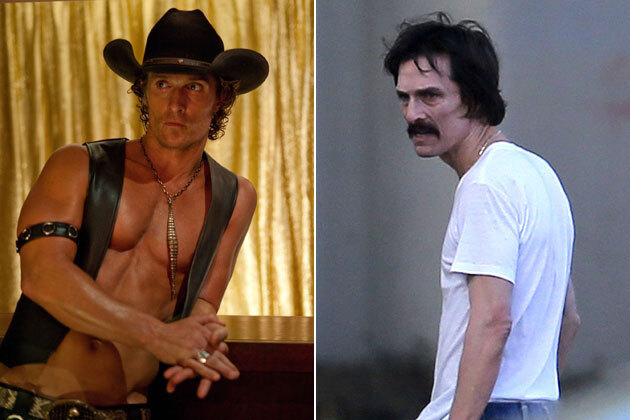 0
Смотреть все фото в галерее
Matthew McConaughey‘s transformation from ‘Magic Mike‘ stud to the frail character in ‘The Dallas Buyers Club‘ is the most astounding one from recent memory. In the true-to-life film, he plays Ron Woodroof, a Texan straight man diagnosed with AIDS and who, in response to the failing effects of the only AIDS medication available at the time, started an underground non-toxic drug ring. 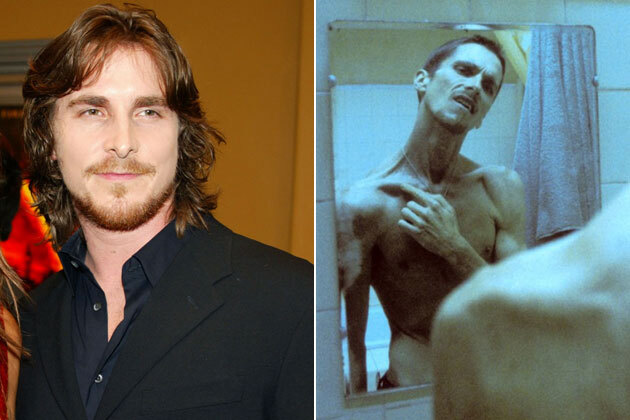 0
Before Christian Bale became the buff version of himself for Batman in Christopher Nolan‘s ‘Dark Knight’ trilogy, he was at his slimmest for the lead role in 2004′s ‘The Machinist.’ In it, he portrayed a man on the brink of insanity as a result of his year-long insomnia, and though he was not required to drop a ton of weight, Bale felt the role called for someone who physically appeared to be on the brink of death. 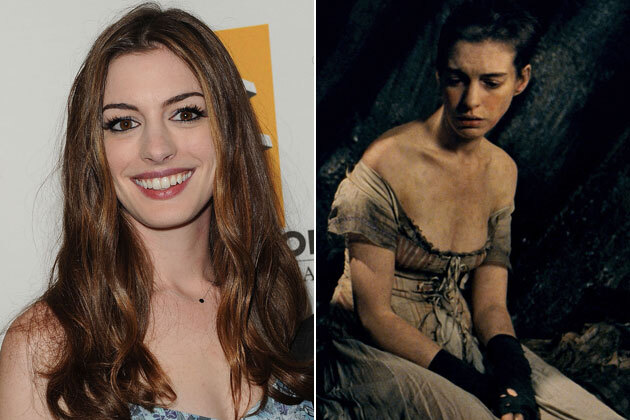 0
2012 was a great year for Anne Hathaway — she starred in the coveted role of Catwoman in ‘The Dark Knight Rises‘ and in Tom Hooper’s ‘Les Miserables‘ film adaptation as Fantine. However, it was also the year she lost all her hair and dropped a ton of weight.

Hathaway actually chopped off her locks in the ‘Les Miz’ scene we’ve seen countless times in all the various trailers. Over the course of her press tour, she recollected how she’d lock herself in the bathroom and cry in front of the mirror to get use to the emotional scenes from the film. In addition, she drastically starved herself to in order to look like she was dying. But so far it’s paying off as she’s already won a Golden Globe and a SAG Award for her performance. 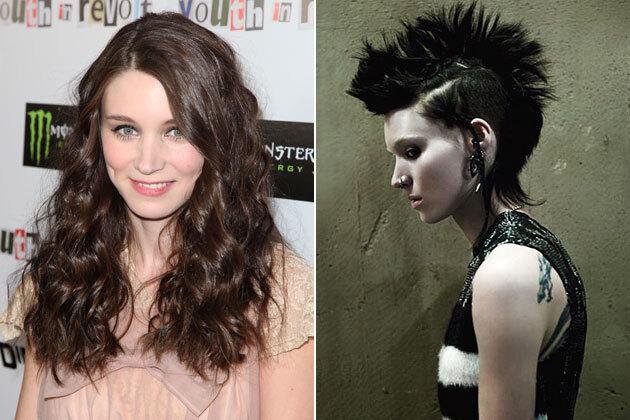 0
Rooney Mara beat out a pool of actresses including Natalie Portman and Scarlett Johansson to snag the coveted role of Lisbeth Salander in the US film version of ‘The Girl with the Dragon Tattoo.’ It was a fresh start for the actress, who not only left behind her previous resume of minor roles, but also her curly long hair and classic cookie-cutter looks.

With an edgier on-screen style and a take-no-prisoners persona, she became the girl in the spotlight — not just in the movie itself, but also in public. All of sudden, Mara was the girl who wore high-end couture and black bangs on the red carpet, and graced the covers of fashion magazines. According to ‘GWTDT’ costume designer Trish Summerville, “[Mara] absorbed pieces of Lisbeth, but made it into her own style.” 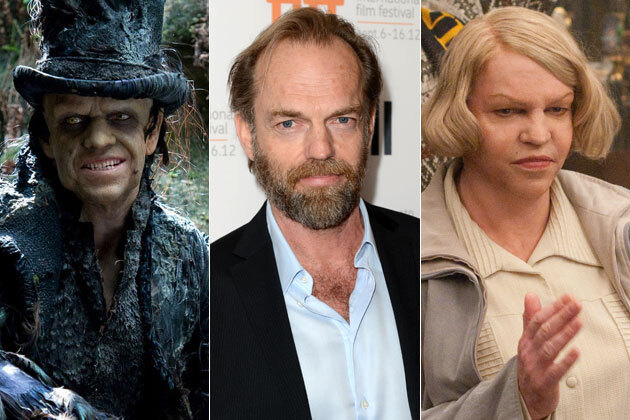 0
Like his co-stars Halle Berry, Tom Hanks, Hugh Grant and Jim Broadbent, Hugo Weaving portrayed multiple characters in ‘Cloud Atlas,’ and two of them we coud barely tell were him — that of Old Georgie and Nurse Noakes.

Those of you who’ve seen ‘Cloud Atlas’ know that these characters were separated by time. Old Georgie is the imaginary, devilish creature Hanks’ post-apocalyptic character had conversations with, while Nurse Noakes ran the Aurora House Hotel and took sadistic pleasure in tormenting certain patients. The makeup process took upwards of four hours for each look, and Weaving would, admittedly, nod off at times. 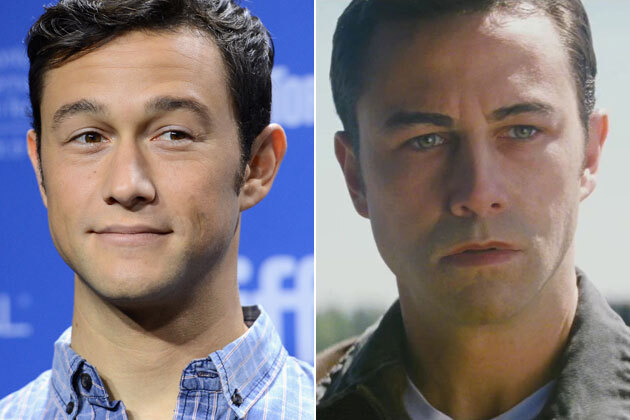 0
After Joseph Gordon-Levitt became a hit with ‘The Dark Knight Rises’ and for all intensive purposes was our new Robin Boy Wonder, he starred in a little time-travel flick known as ‘Looper.’ Loopers are these sci-fi assassins who are waiting in a past time period to take out their targets sent to them from the future. Mr. Levitt played the younger self of Bruce Willis‘ Joe, who is sent back in time as Levitt’s next target, which if performed would “close the loop.” 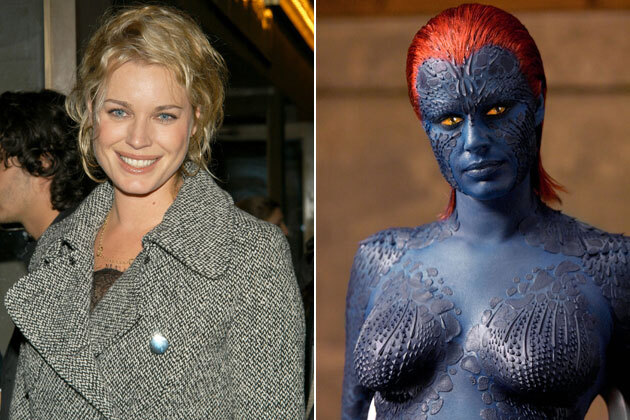 0
Rebecca Romijn is by far one of the sexiest women on the planet and will forever be known as a geek goddess for her role in the ‘X-Men‘ franchise. Throughout the trilogy, kickstarted by Bryan Singer, Romijn played the slippery and deadly hench-woman of Magneto, Mystique, a mutant capable of shapeshifting into any person she laid eyes on.