12 feb 2013 07:29
540
23
A snap-happy astronaut captured this incredible shot of San Francisco's Golden Gate Bridge from his perch hundreds of miles above the earth on board the International Space Station.
Commander Chris Hadfield, 53, has posted hundreds of breathtaking images on his Twitter account since joining the crew as part of Expedition 34 just a few weeks ago.
As well as San Francisco's famous landmark, Commander Hadfield - who has described the shifting view of the earth from windows of the space station as 'a perpetual magnet' - has snapped the bright lights of Manhattan at night, the 'endless' golden beaches of Australia, a vivid blue river snaking through Brazilian farmland, and 'cauliflower' clouds sitting over the Amazon rainforest. 0
Смотреть все фото в галерее
Out of this world: The Golden Gate Bridge is visible from space in this incredible shot of San Francisco Bay taken by astronaut Chris Hadfield 0
The city that never sleeps: Mr Hadfield, the flight engineer on Expedition 34, also tweeted this image of the shining lights of New York City at night from his perch on board the International Space Station 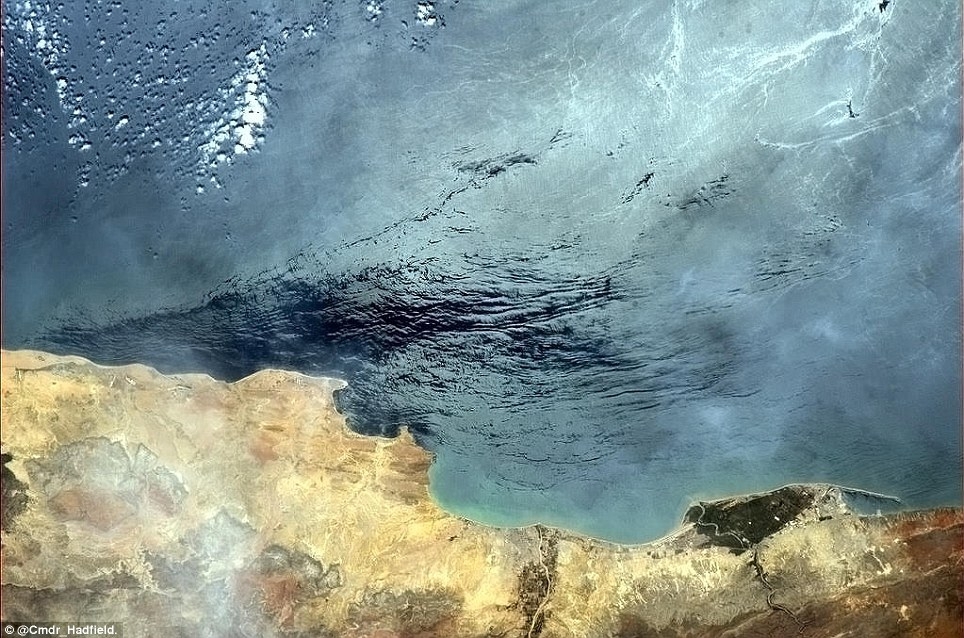 0
Patterns: The astronaut tweeted this picture of patterns on the ocean as seen from space, adding the caption 'Water has structure - we just aren't normally in a place to see it' 0
Contrast: Commander Hadfield posted this shot of a vivid blue river snaking through Brazilian farmland on his Twitter page 0
All in a row: Commander Hadfield joked that this view of eight clouds perfectly aligned made it look as though planet earth was sending smoke signals 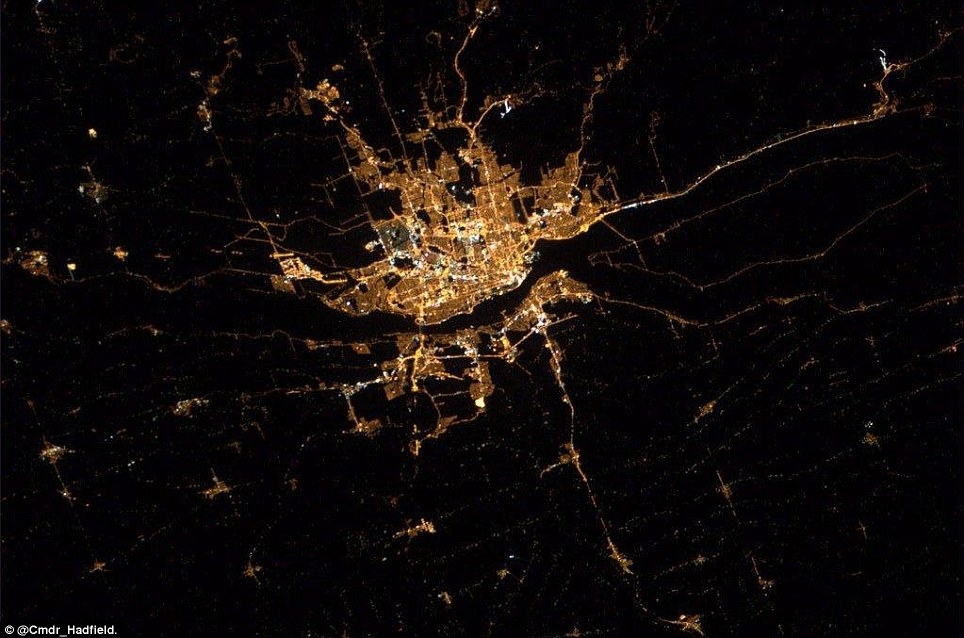 0
Home sweet home: The Canadian astronaut, who was born in Ontario, posted this picture of the view of Quebec City lit up at night 0
Down under from up above: The astronaut tweeted this shot of what he described as the 'endless beaches of Australia', adding 'That's where I'd go for Australia Day!' 0
City views: The view of Boston, U.S., by night as seen by the crew on board the International Space Station 0
'Perpetual magnet': Commander Hadfield has said he struggles to tear himself away from views like this one of Port Elizabeth, South Africa 0
African landscapes: The flight commander, who was launched into space on the Soyuz capsule just before Christmas, tweeted this picture of sunlight glinting on Lake Nasser, Egypt 0
Disaster: The astronaut shared this view of flood hit Bundaberg, Australia, adding 'Keep safe and dry down there' 0
Inspiring views: Commander Hadfield said he could hear the Beach Boys playing in his head as he gazed at the Caribbean island of Aruba miles below 0
Descriptive: The astronaut described 'cauliflower' clouds above the Amazon rainforest and a river 'like lightning' in this picture from the International Space Station 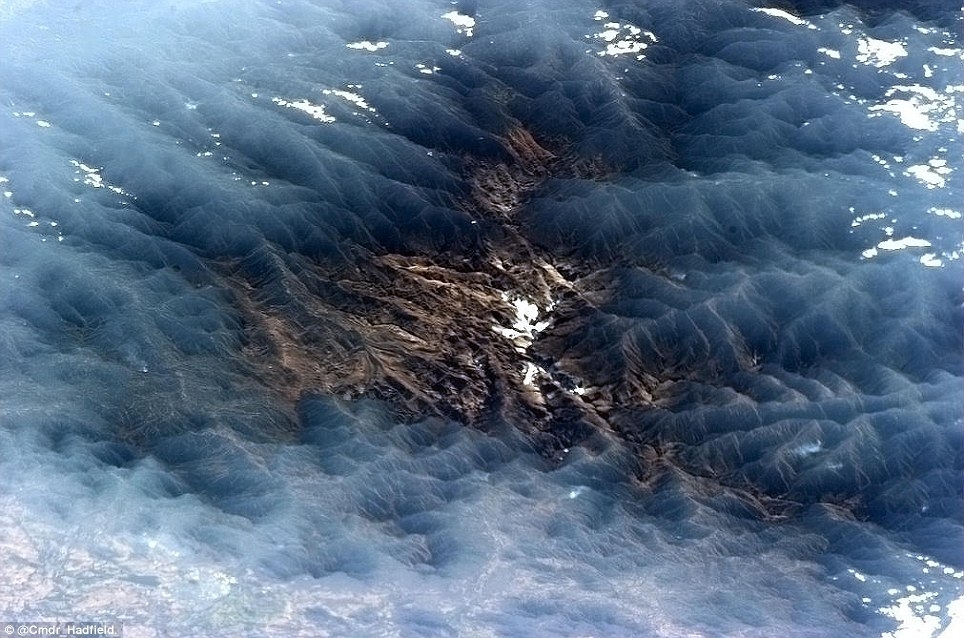 0
'Mysterious, beautiful and surreal': The astronaut was struck by the sight of Venezuelan mountains shrouded in misty clouds 0
Earth's splendour: This view of the Australian outback would have inspired the abstract artist Jackson Pollock, Commander Hadfield said 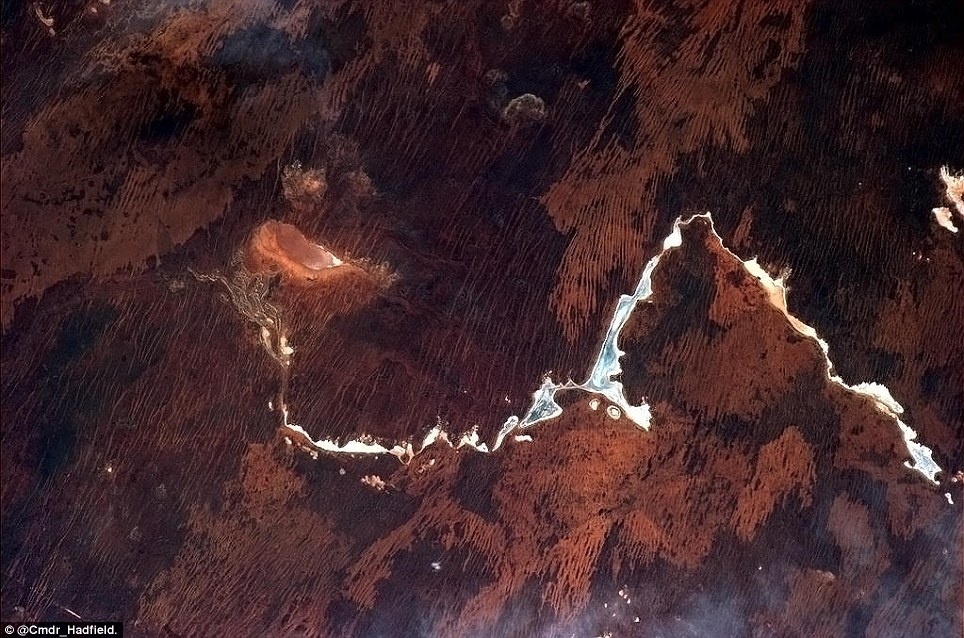 0
Textured: The flight engineer said the Australian outback resembled rock crystal under a microscope when seen from space 0
Multi-coloured: The astronaut's images, like this one of the varying shades of the Australian outback, allow his followers to see what the Expedition 34 crew see 0
Europe: Gibraltar, Algeciras and Ceuta are visible in Commander Hadfield's snap of the 'Mediterranean's mouth' 0
Globe-spanning images: This picture taken from hundreds of miles above the earth shows Istanbul, Turkey 0
Striking: The 'explosion of colour and texture' visible from above this Australian river mouth caught the astronaut's eye 0
Smoke: The astronaut tweeted this 'angry-looking' smoke cloud spotted over Western Australia, where bush fires have been raging 0
Flight engineer: Chris Hadfield at work on board the International Space Station, which is in orbit around 250 miles above the surface of the earth