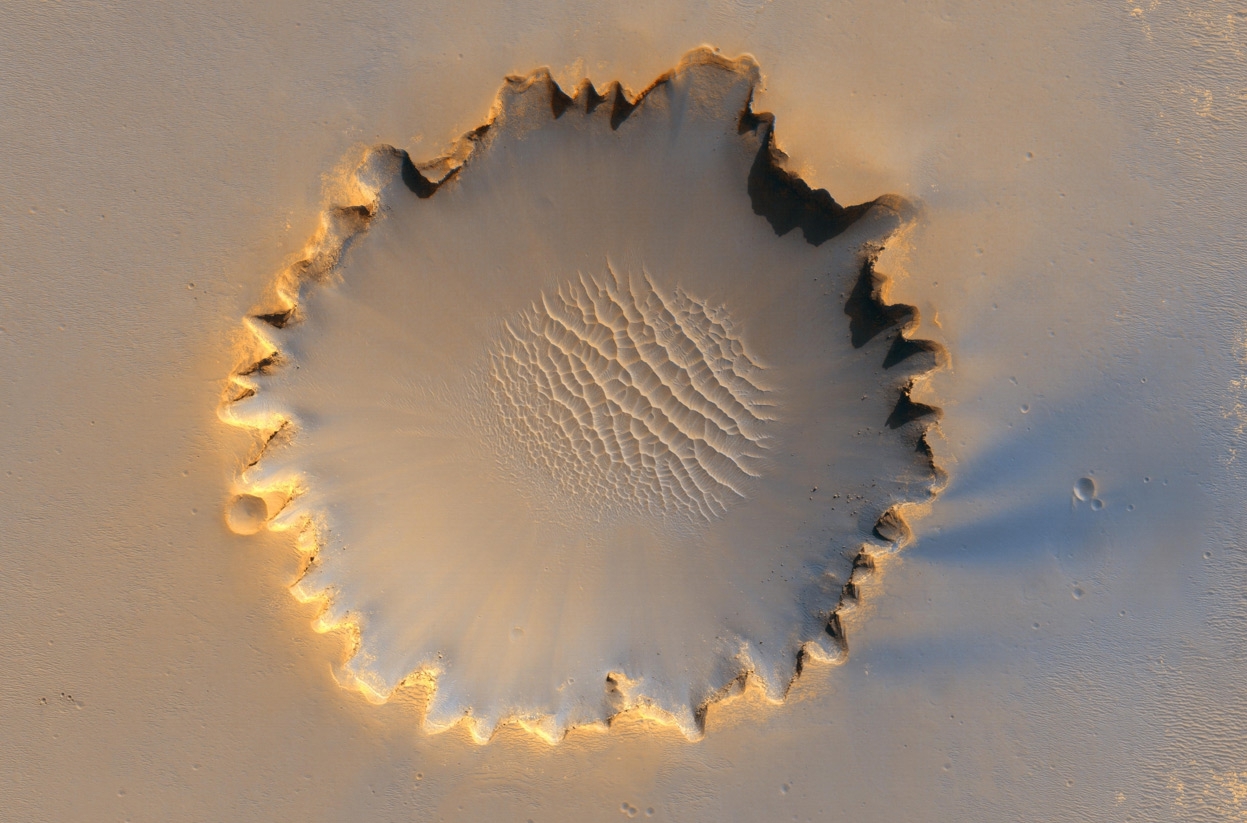 12 feb 2013 07:45
493
30
NASA's Mars rover Opportunity just celebrated its ninth anniversary on Mars - a mission that was originally meant to last just 90 days. Although recently eclipsed in the news by its bigger brother Curiosity, Opportunity is still going strong and making valuable scientific discoveries. Launched into space in 2003, Opportunity bounced to a hole-in-one landing in a small crater on Mars' Meridiani Planum on January 25, 2004. It has since spent 3,212 Martian days, or sols, on the surface, slowly moving from target to target, exploring craters, meteorites, unusual rock formations, and finding evidence of past water activity. Over the past 108 months, Opportunity has driven a total of 35.48 kilometers (22.05 miles) across Mars -- not bad for a mission designed to last only three months. 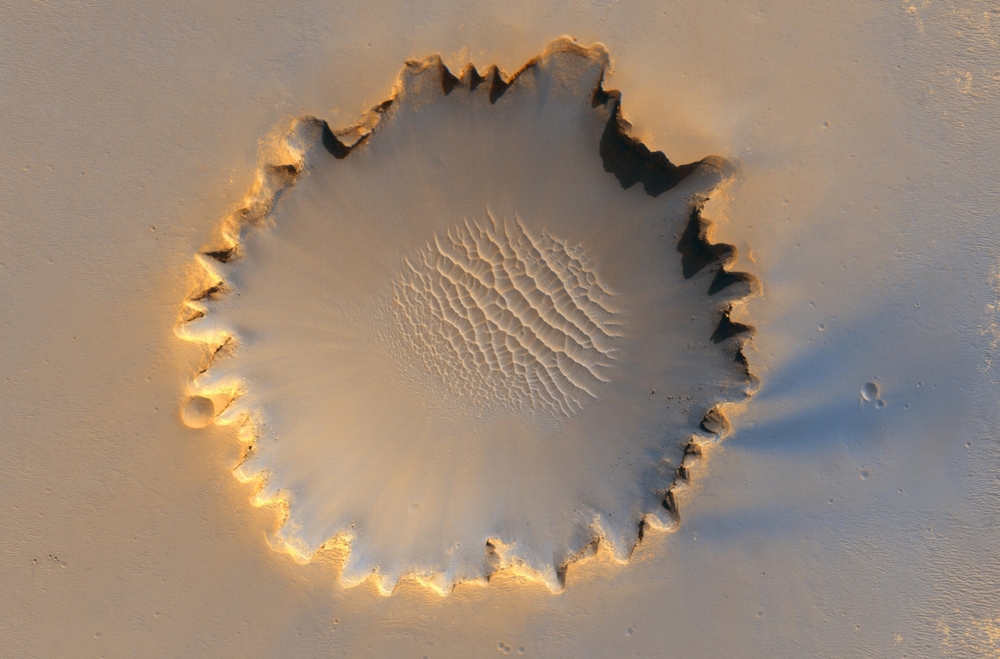 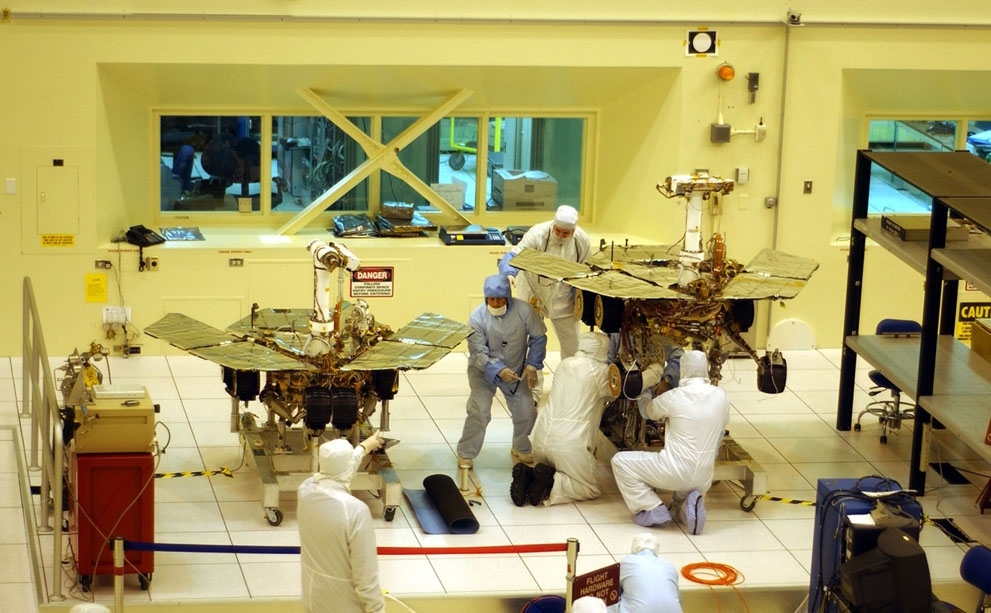 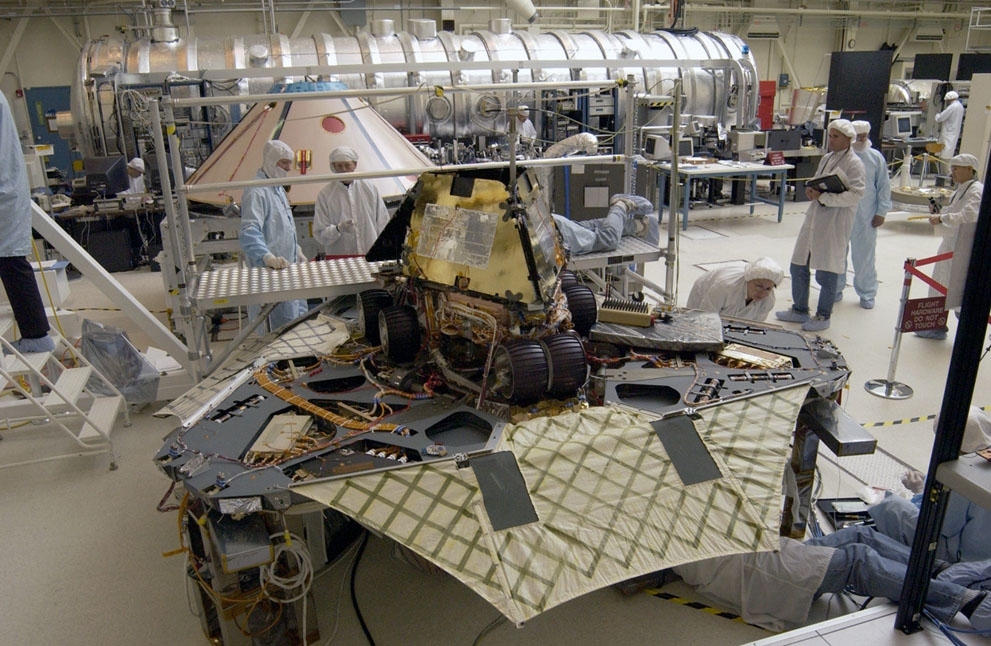 0
Rover 1 (Opportunity) and lander. A "Martian mechanic" checks beneath the completely deployed Rover 1 lander. Atop the lander is Rover 1 with its wheels and solar arrays in the stowed position. (NASA/Kent Frewing) 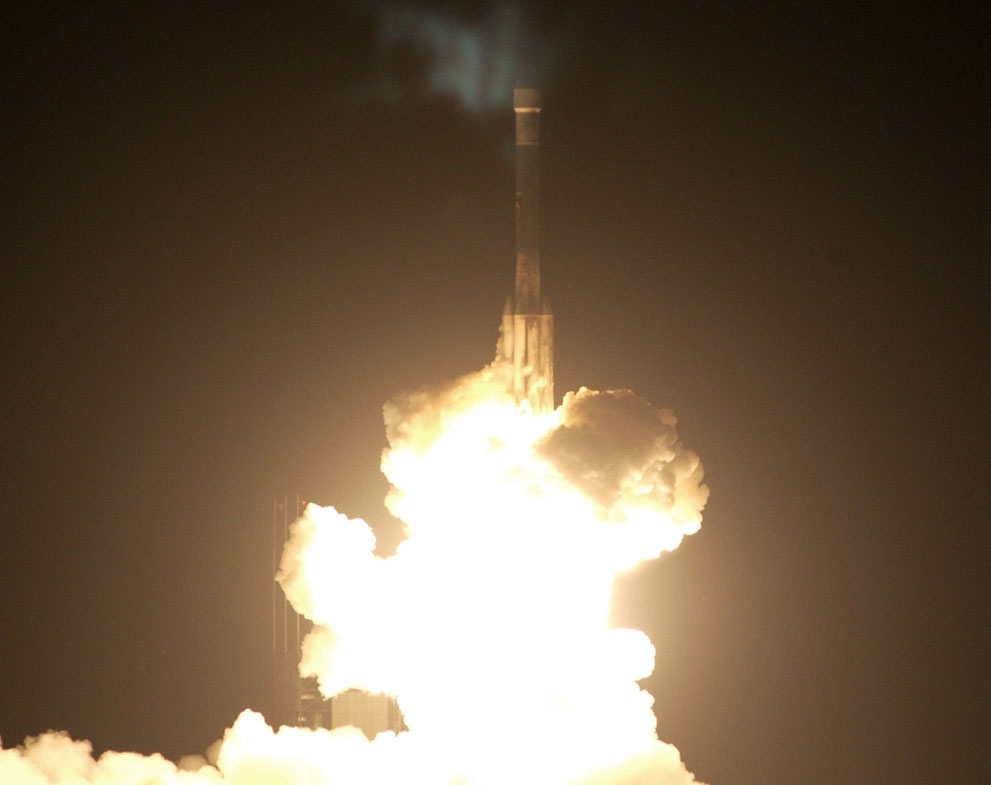 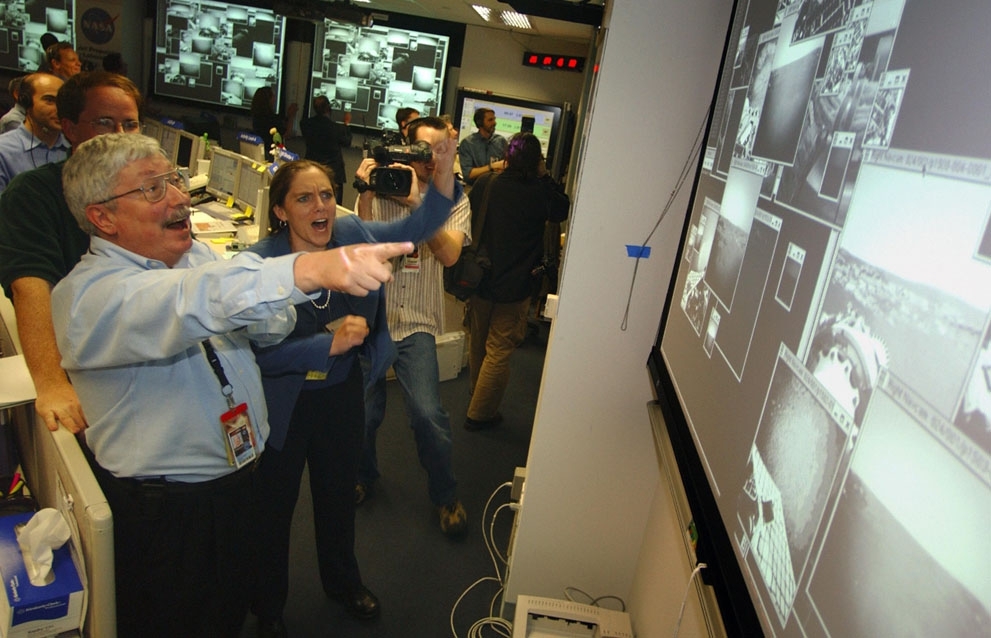 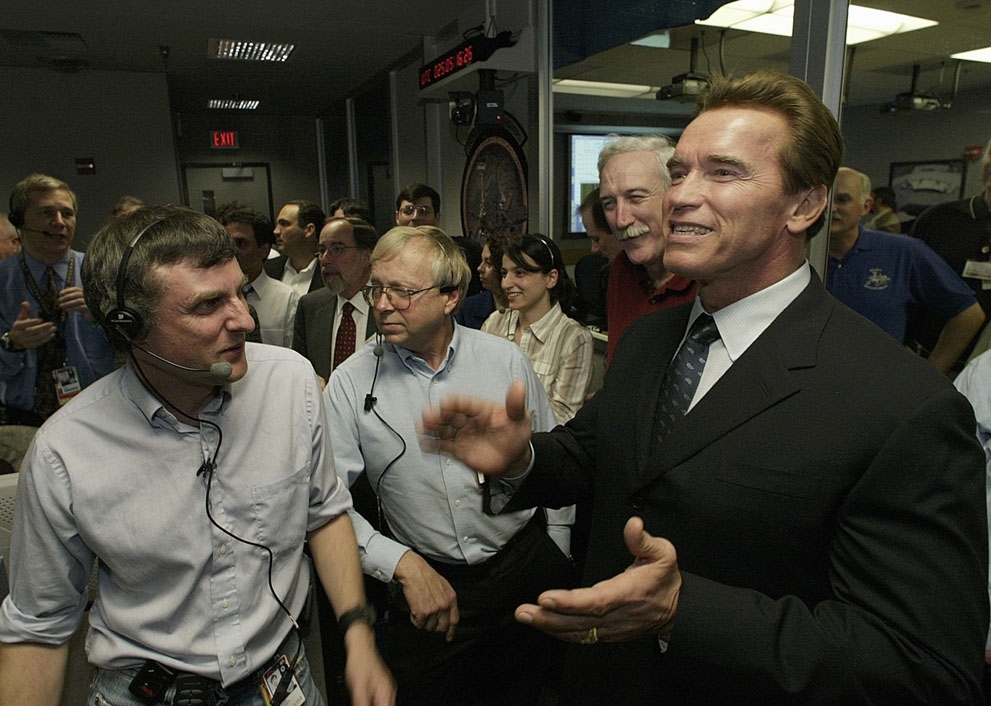 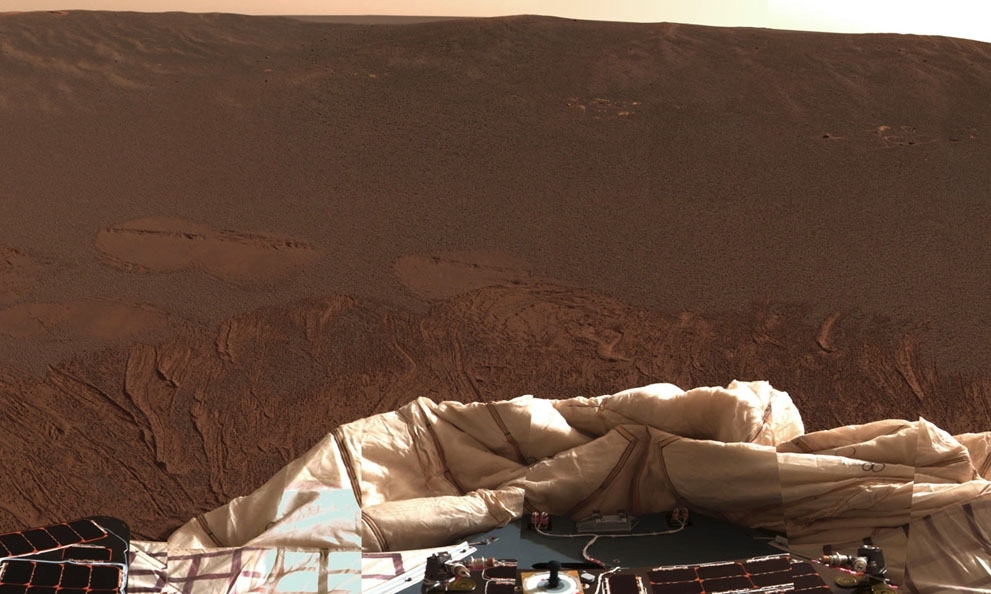 0
The interior of a crater surrounding the Mars Exploration Rover Opportunity at Meridiani Planum on Mars can be seen in this color image from the rover's panoramic camera, on January 24, 2004. Note the disturbances in the soil from the airbags, which were used to cushion the landing. The airbags are now deflated, seen at bottom. (NASA/JPL/Cornell) 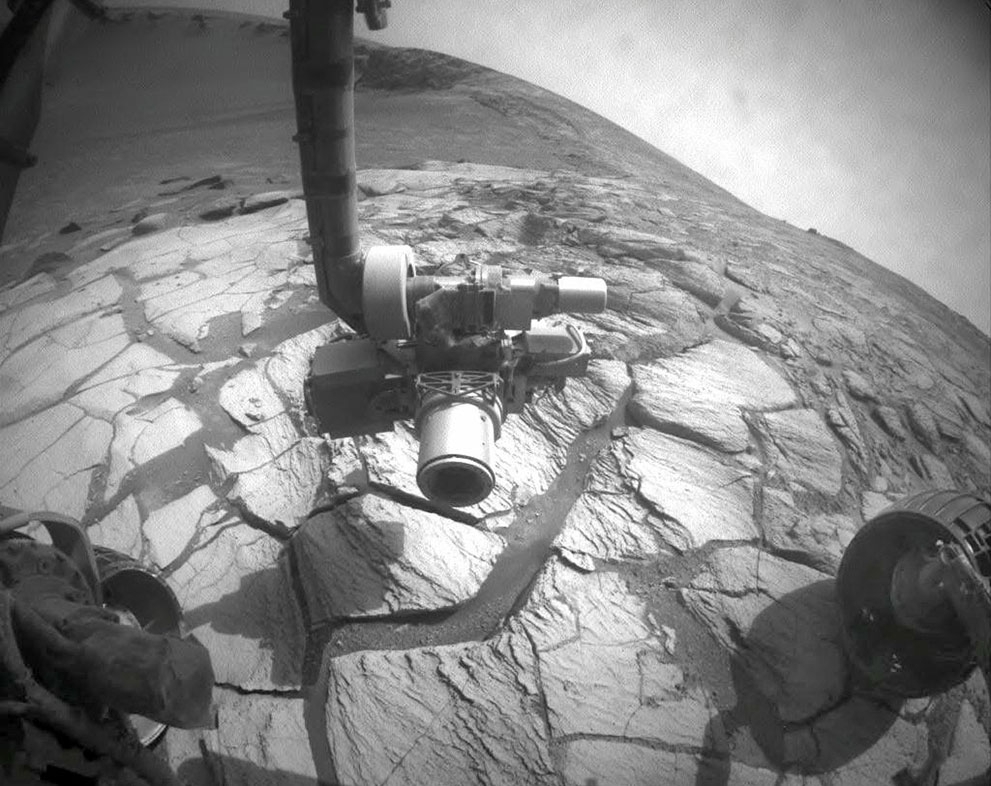 0
This photo taken by the Mars rover Opportunity's front hazard-identification camera, shows a wide-angle view looking down into and across Victoria Crater. (AP Photo/NASA, JPL-Caltech) 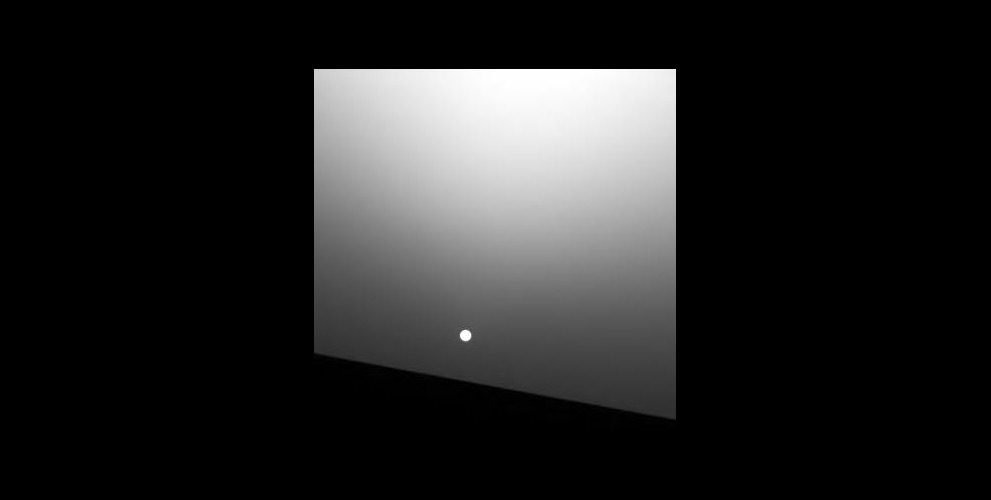 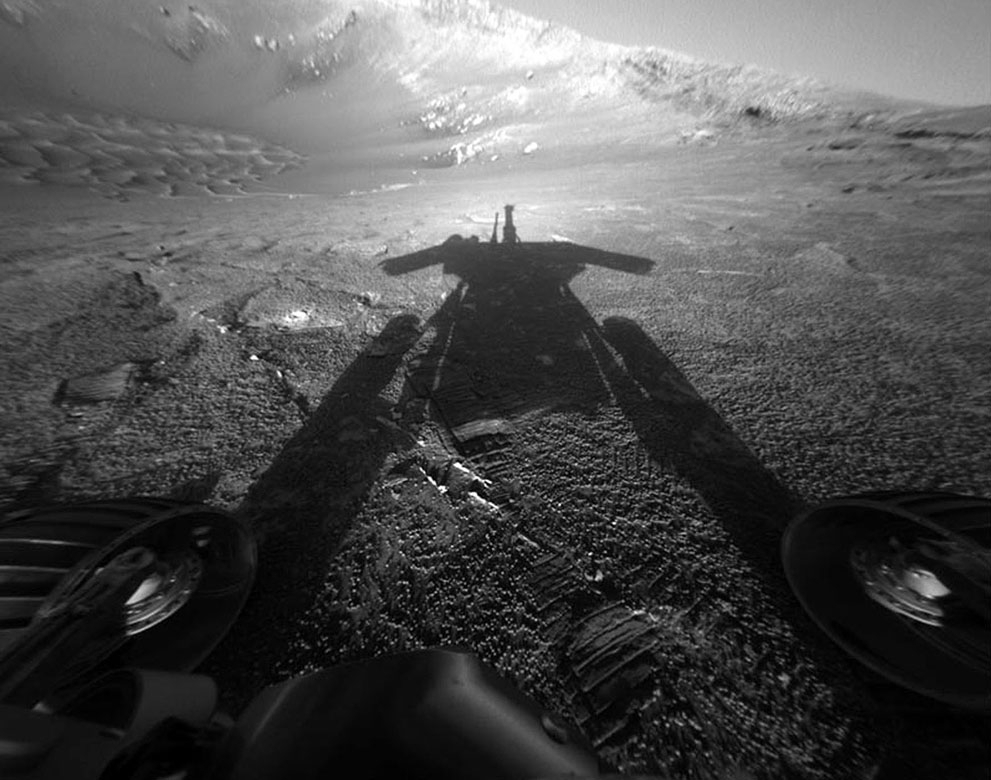 0
A shadow cast by NASA's Mars Rover Opportunity stretches across the Martian surface in this image taken on July 26, 2004. (AP Photo/ NASA, JPL) 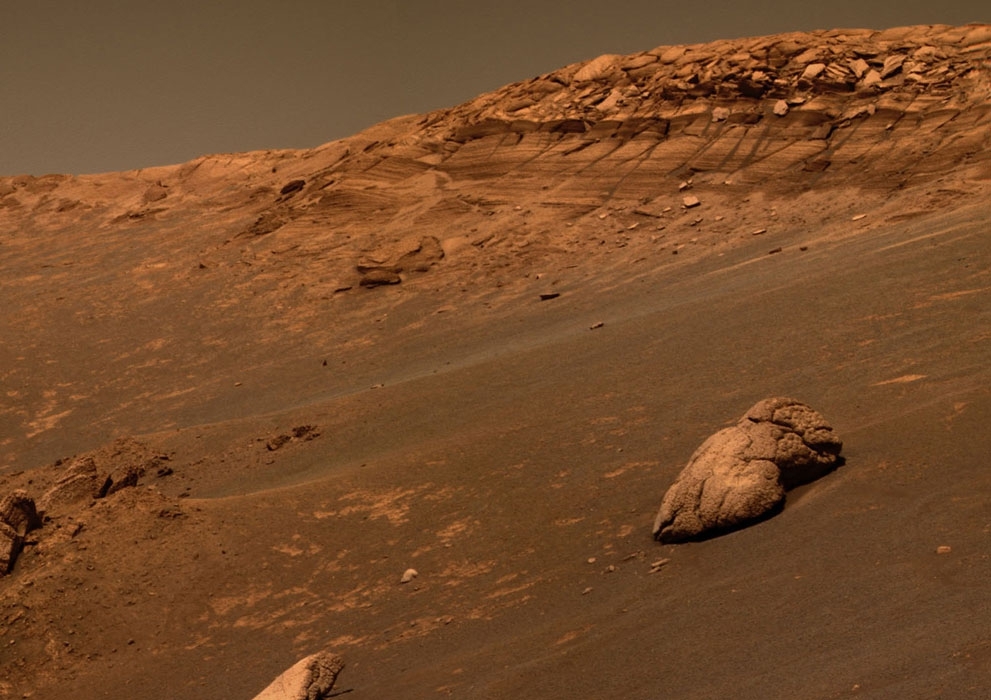 0
An image taken by Opportunity on October 7, 2004, shows a bizarre, lumpy rock informally named Wopmay on the lower slopes of Endurance Crater. Scientists believe the lumps in Wopmay were formed by one of two processes. Either they were caused by the impact that created the football field-sized crater, or they arose when water soaking the rock dried up. (AP Photo/NASA)

0
This image from Opportunity shows an extreme close-up of round, blueberry-shaped formations in the Martian soil near a part of the rock outcrop at Meridiani Planum called Stone Mountain, on February 12, 2004. Scientists studied these curious formations for clues about the soil's formation. (Reuters/HO/NASA/JPL/Cornell)

0
Clouds appear in the Martian sky above Endurance Crater in this mosaic of frames taken by the navigation camera on NASA's Rover Opportunity at about 9:30 a.m. on the rover's 290th sol (November 16, 2004). These clouds are part of a band that forms near the equator when Mars is near the part of its orbit that is farthest from the Sun. (AP Photo/NASA/JPL) 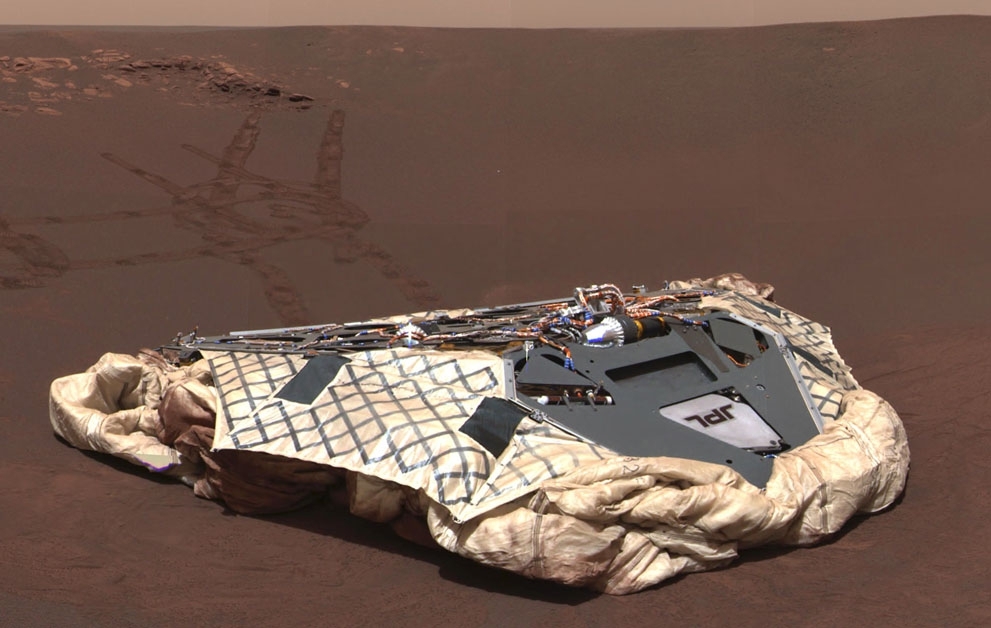 0
This image taken by the panoramic camera onboard Opportunity shows the rover's now-empty lander, the Challenger Memorial Station, at Meridiani Planum, Mars, on February 27, 2004. (NASA/JPL/Cornell)

0
Opportunity gained this view of its own heat shield during the rover's 325th martian day (December 22, 2004). The main structure from the successfully used shield is to the far left. Additional fragments of the heat shield lie in the upper center of the image. The heat shield's impact mark is visible just above and to the right of the foreground shadow of Opportunity's camera mast. (NASA/JPL) 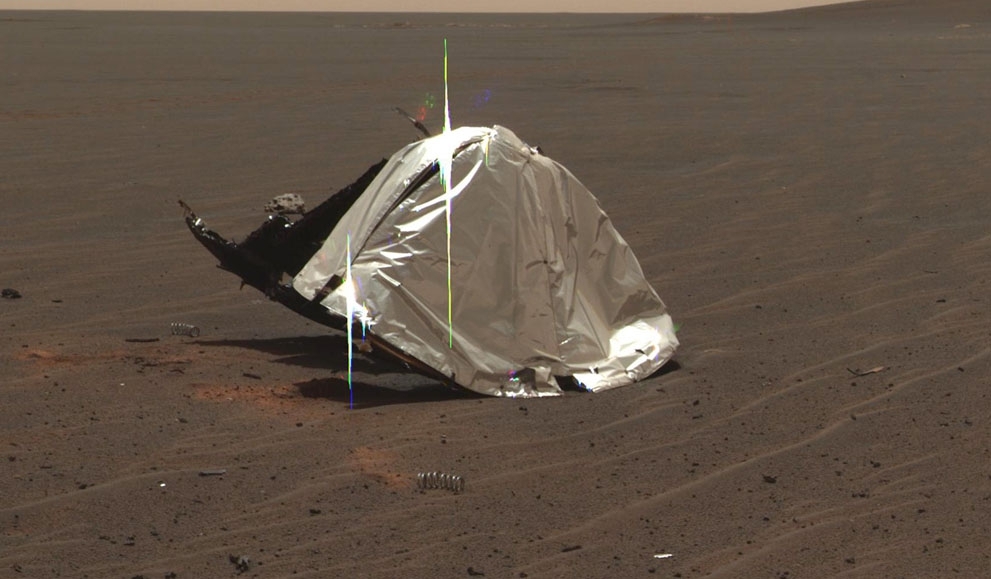 0
The remains of the heat shield that protected the rover from temperatures of up to 2,000 degrees Fahrenheit as it made its way through the martian atmosphere. This two-frame mosaic was taken on the rover's 335th martian day, or sol, (January 2, 2005). The view is of the main heat shield debris seen from approximately 10 meters (about 33 feet) away from it. Many rover-team engineers were taken aback when they realized the heat shield had inverted, or turned itself inside out. (NASA/JPL/Cornell) 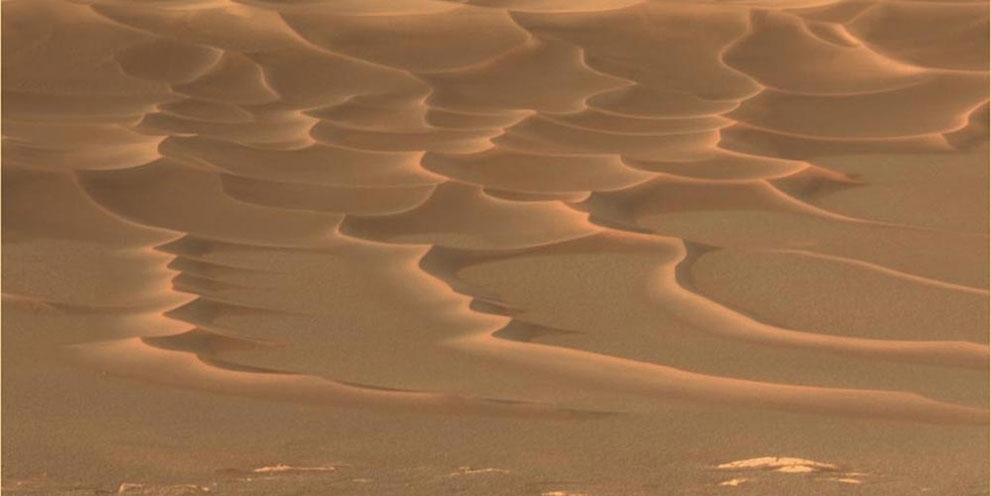 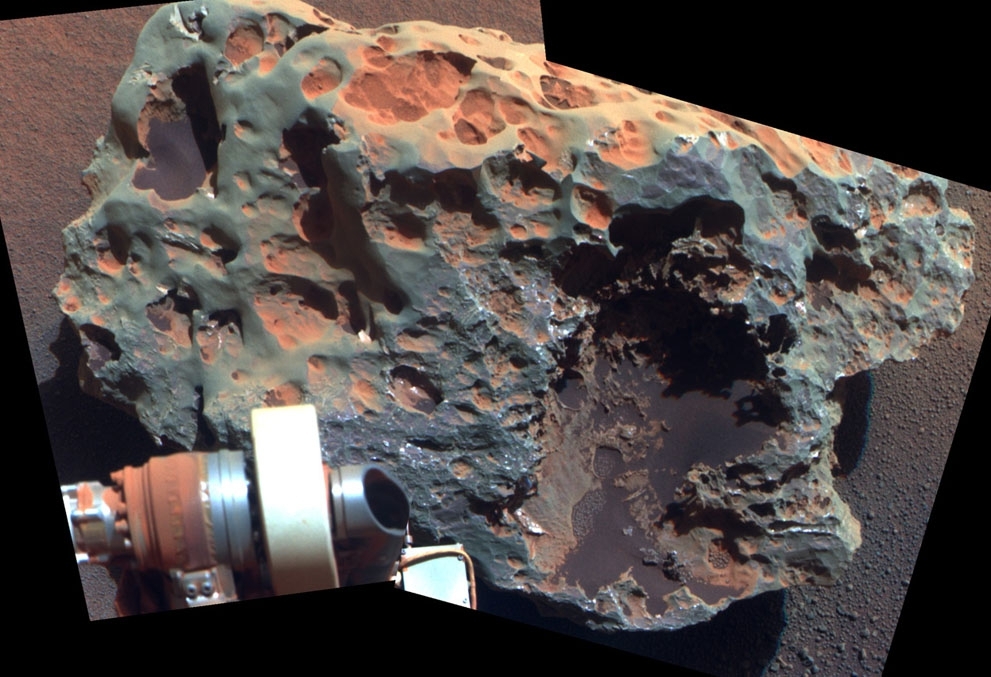 0
A view of a rock called "Block Island," the largest meteorite yet found on Mars, comes from the panoramic camera on Opportunity. Analysis of Block Island's composition using the rover's alpha particle X-ray spectrometer confirmed that it is rich in iron and nickel. The rock is about 60 centimeters (2 feet) across. (AP Photo/NASA/JPL-Caltech/Cornell University) 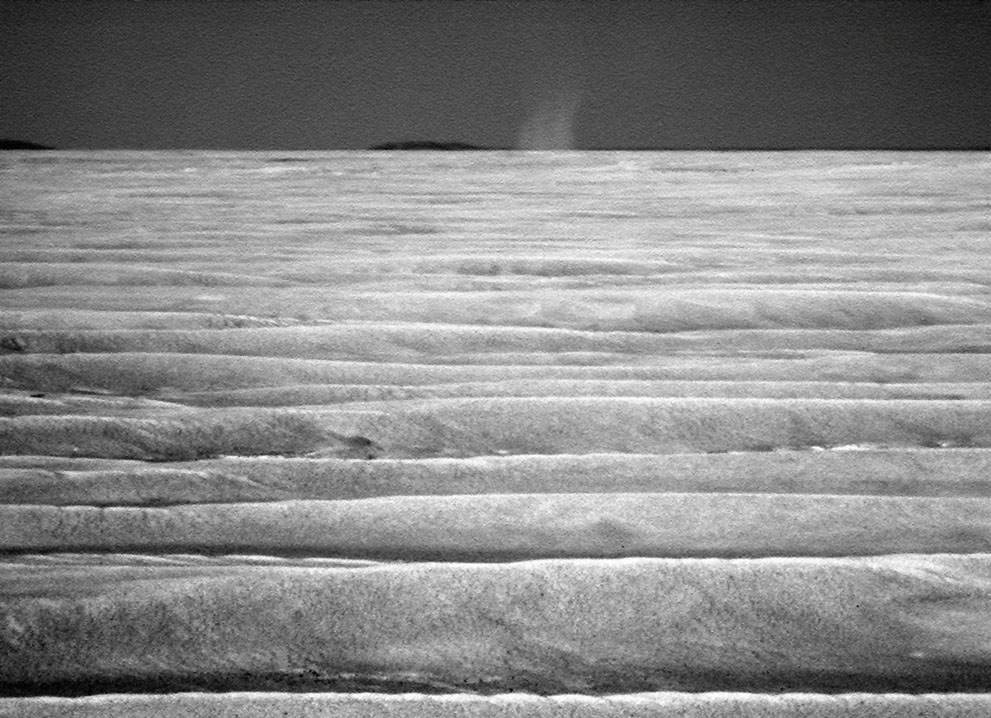 0
The first dust devil that Opportunity observed on Mars. The whirlwind appeared in a routine drive-direction image taken by Opportunity's panoramic camera right after a drive during the 2,301st Martian day, or sol, of the rover's mission on Mars, July 15, 2010. (NASA/JPL-Caltech/Cornell University/Texas A&M) 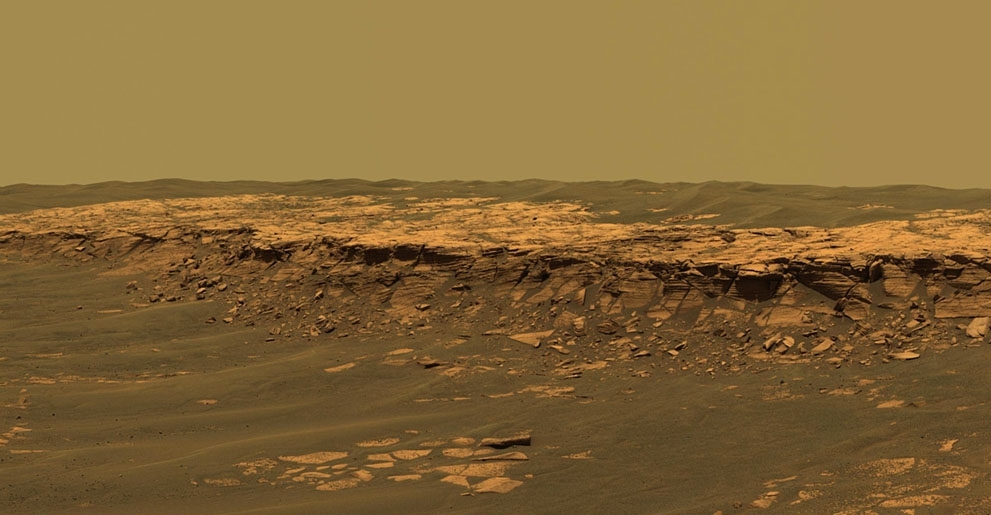 0
The panoramic camera aboard Opportunity acquired this panorama of the "Payson" outcrop on the western edge of Erebus Crater during Opportunity's sol 744 (February 26, 2006). From this vicinity at the northern end of the outcrop, layered rocks are observed in the crater wall, which is about 1 meters (3.3 feet) thick. The view also shows rocks disrupted by the crater-forming impact event and subjected to erosion over time. (NASA/JPL-Caltech/USGS/Cornell University) 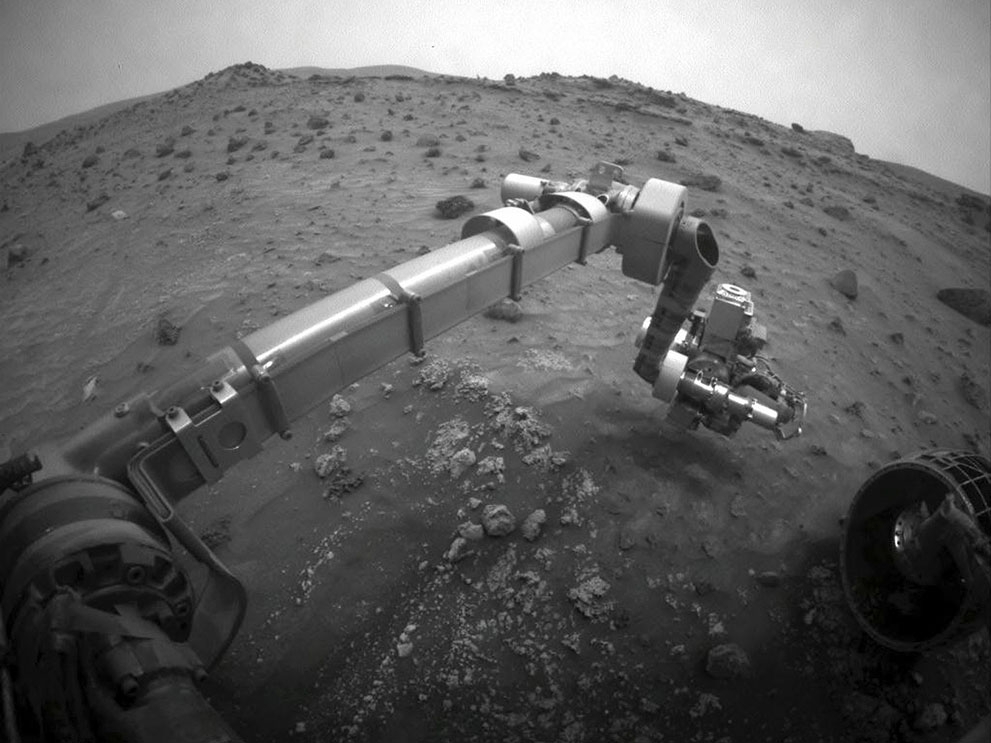 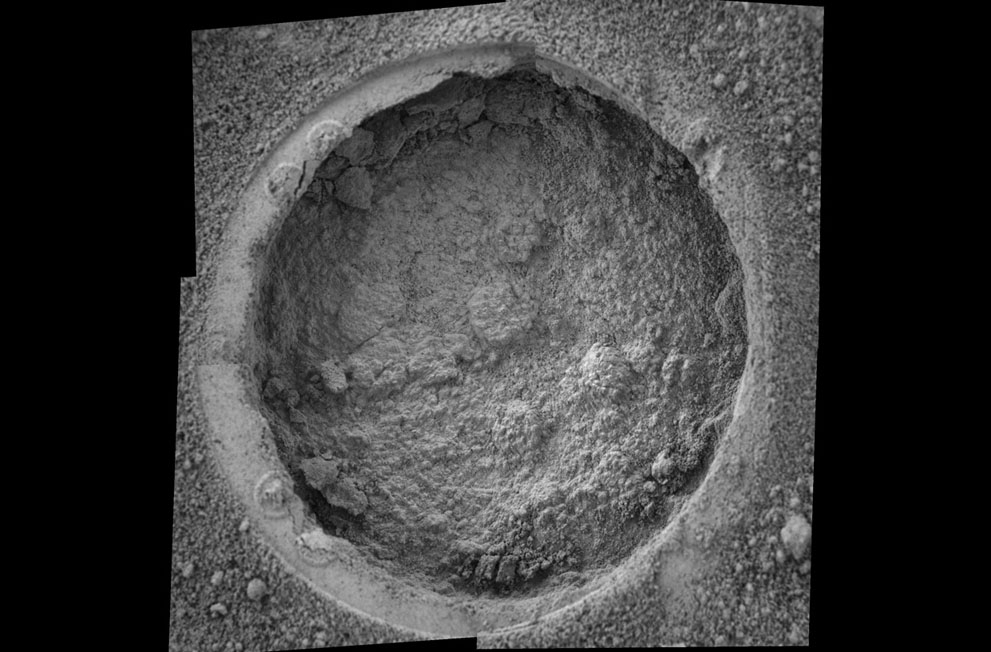 0
This image taken by Opportunity shows a target dubbed "Campbell" on a rock called "MacKenzie" in "Endurance Crater." Opportunity dug a hole into the target with its rock abrasion tool, then captured this picture with its microscopic imager on sol 184 (July 30, 2004). The image mosaic is about 6 centimeters (2.4 inches) across. (NASA/JPL/Cornell/USGS)

0
Opportunity edgedclose to the top of the "Duck Bay" alcove along the rim of Victoria Crater during the rover's 952nd Martian day, or sol (overnight September 27 to 28), and gained this vista of the crater. The rover's navigation camera took several exposures combined into this mosaic view of the crater's interior. The far side of the crater is about 800 meters (one-half mile) away. The rim of the crater is composed of alternating promontories, rocky points towering approximately 70 meters (230 feet) above the crater floor, and recessed alcoves, such as Duck Bay. (NASA/JPL-Caltech) 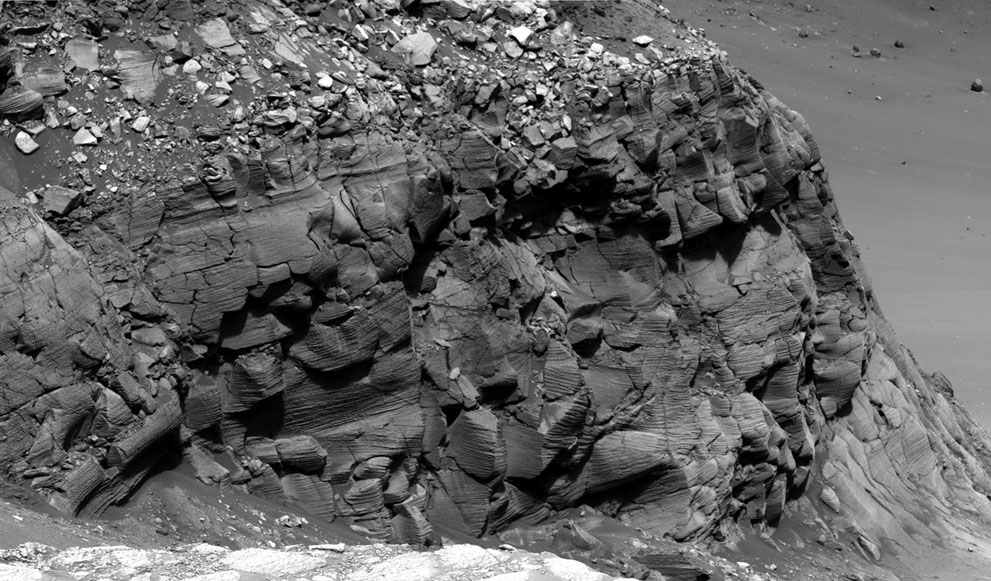 0
An example of spectacular cross-bedding in Victoria crater on the outcrops at Cape St. Mary, which is an approximately 15 m (45 foot) high promontory located along the western rim of Victoria crater and near the beginning of the rover's traverse around the rim. These Pancam super-resolution images have allowed scientists to discern that the rocks at Victoria Crater once represented a large dune field that migrated across this region. (NASA/JPL-Caltech/Cornell University) 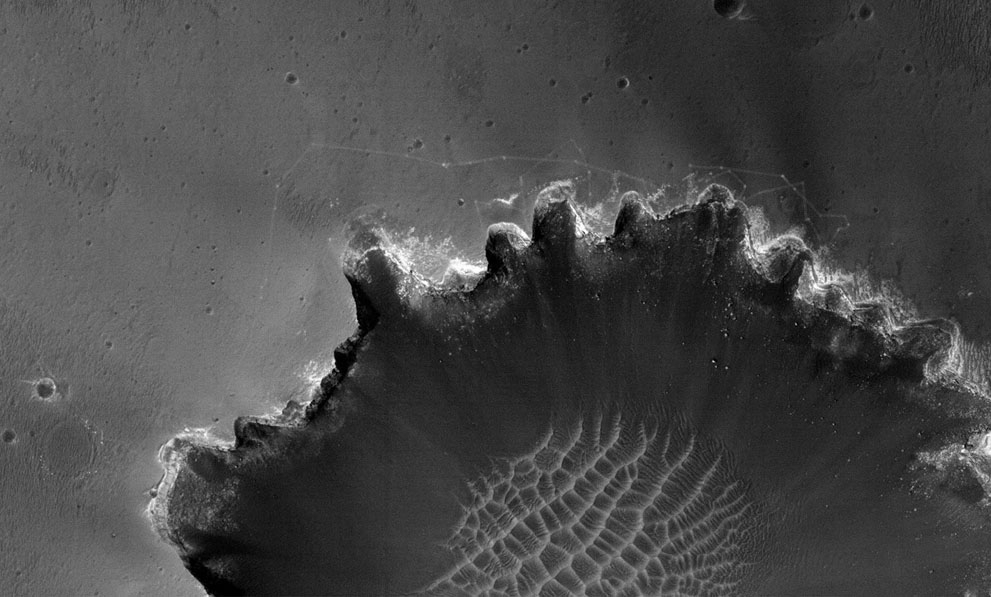 0
2007-06-28 Tracks left by Opportunity as it traveled along the rim of Victoria Crater can be seen clearly in this image taken by the HiRISE camera on NASA's Mars Reconnaissance Orbiter spacecraft. (NASA/JPL/University of Arizona) 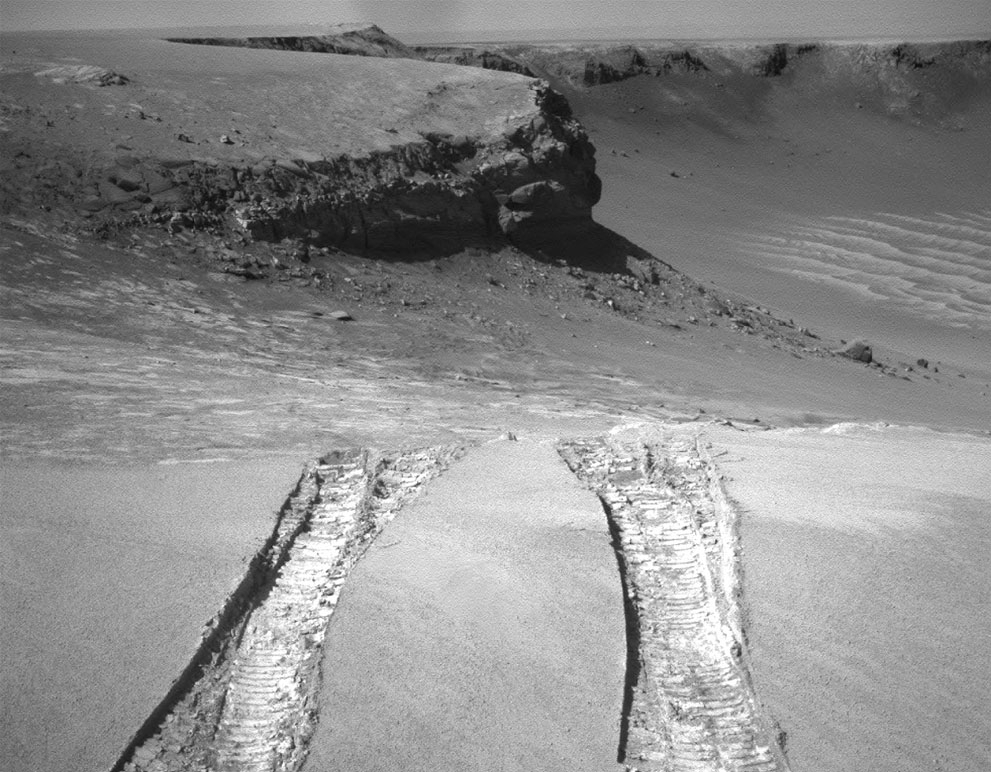 0
Opportunity climbs out of Victoria Crater on August 28, 2008, following the tracks it had made when it descended into the 800-meter-diameter (half-mile-diameter) bowl nearly a year earlier. The rover's navigation camera captured this view back into the crater just after finishing a 6.8-meter (22-foot) drive that brought Opportunity out onto level ground during the mission's 1,634th Martian day, or sol. (AP Photo/NASA) 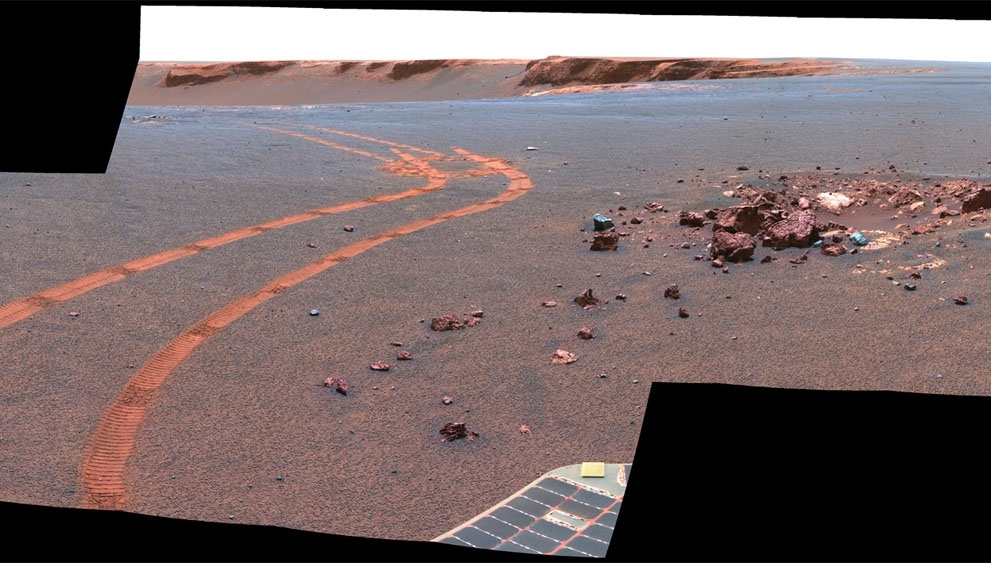 0
This view from Opportunity shows the tracks left by a drive executed with more onboard autonomy than has been used on any other drive by a Mars rover. Opportunity made the curving, 15.8-meter (52-foot) drive during its 1,160th Martian day, or sol (April 29, 2007). It was testing a navigational capability called "Field D-star," which enables the rover to plan optimal long-range drives around any obstacles in order to travel the most direct safe route to the drive's designated destination. Victoria Crater is in the background, at the top of the image. (NASA/JPL-Caltech/Cornell University) 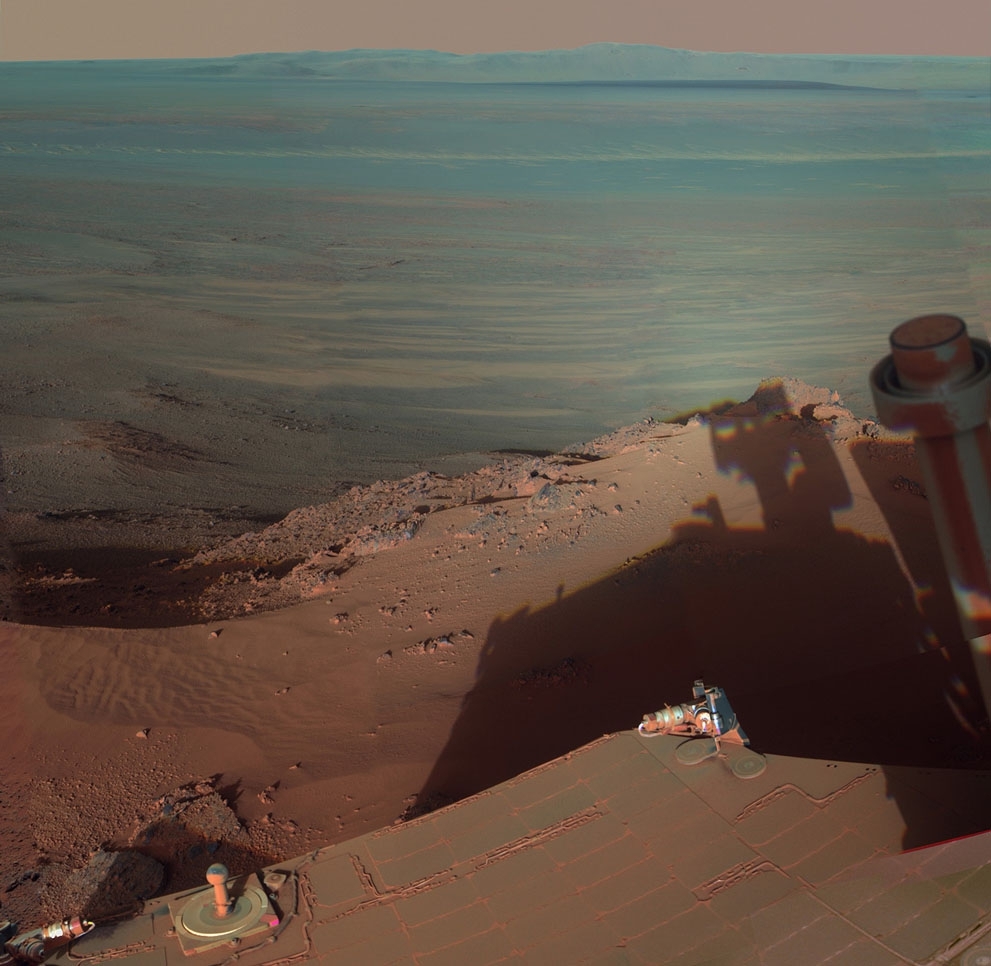 0
Opportunity catches its own late-afternoon shadow in a view eastward across Endeavour Crater on Mars. The rover used a panoramic camera between about 4:30 and 5:00 p.m. local Mars time to record images taken through different filters and combined into this mosaic view. The view is presented in false color to make some differences between materials easier to see, such as the dark sandy ripples and dunes on the crater's distant floor. (AP Photo/NASA/JPL-Caltech/Cornell/ASU) 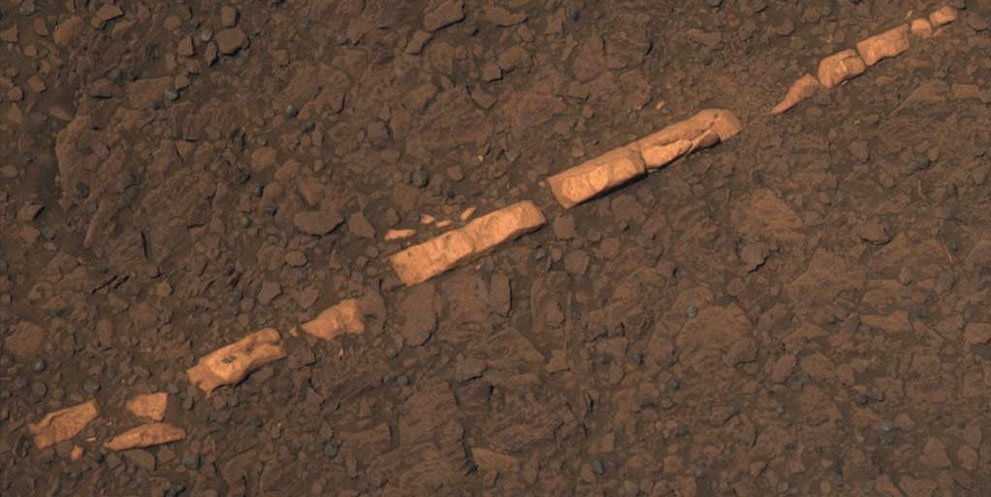 0
This color view taken November 7, 2011 of a mineral vein called "Homestake" comes from the Pancam on Opportunity, taken on December 7, 2011. The vein is about the width of a thumb and about 18 inches (45 centimeters) long. Opportunity examined it in November 2011 and found it to be rich in calcium and sulfur, possibly the calcium-sulfate mineral gypsum. Homestake is near the edge of the "Cape York" segment of the western rim of Endeavour Crater. The view is presented in approximate true color. (Reuters/NASA/JPL-Caltech/Cornell/ASU)

0
As Opportunity reached the ninth anniversary of its landing on Mars, the rover was working in the Matijevic Hill area, seen in this view from Opportunity's Pancam. Opportunity landed January 24, 2004. The landing site was about 12 miles (19 kilometers), straight-line distance, or about 22 miles (35.5 kilometers) driving-route distance, from this location on the western rim of Endeavour Crater. The field of view encompasses most of the terrain traversed by Opportunity during a "walkabout" in October and November 2012 to scout which features to spend time examining more intensely. (NASA/JPL-Caltech/Cornell/ASU)