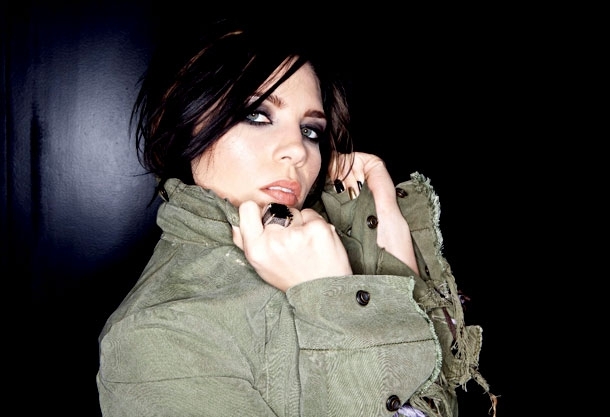 WHO? Skylar Grey (aka Holly Brook Hafermann) aged a mere 25 is a Grammy-nominated American multi-instrumentalist, singer, songwriter & producer. She’s no wide-eyed newcomer to the music business either having major role in writing 2010′s biggest selling single “Love the Way You Lie” for Eminem & Rihanna. In fact the rumor is, she penned the chorus in a mere 15 minutes. To add that impressive achievement, she’s also written & featured on “I Need A Doctor” (Dr. Dre & Eminem), “Coming Home” (Diddy-Dirty Money), and “Words I Never Said” (Lupe Fiasco). Simply put, the girl has connections and a knack for writing hooks. So here’s the question. When did the name Holly Brook!2?id=25555520fade and the pseudonym Skylar Grey emerge? The answer, is apparently whilst renting a room in a house infested with black widow spiders & editing porn videos (no I’m not making that up.). In a recent interview with Rap-Up.com she’s stated that shock-rocker Marilyn Manson would feature on her new album. Specifically on a song called “Can’t Haunt Me,” of which she mentioned is about zombies. Fitting really. SO WHAT DOES SHE SOUND LIKE? A mixed bag currently. But judging by her influences (Joni Mitchell, Bob Dylan, Neil Young, Sarah McLachlan and Death Cab for Cutie ) & latest video – her new record should be rather interesting. ANY VIDEOS? Sure is, released this week. The eerie “Dance Without You”. Skylar Grey - Dance Without You