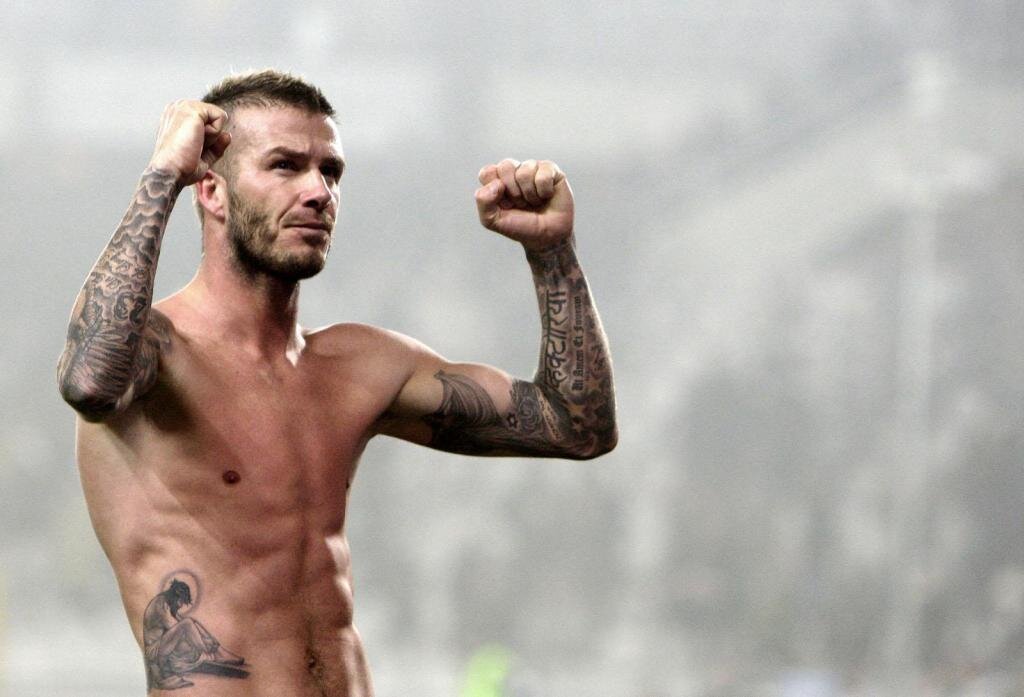 Celebrity Tattoos and the Stories Behind Them

26 mar 2013 10:13
871
12
Celebrity tattoos. They’ve become so commonplace that it's almost rare to see a celebrity who doesn't have one peeking out from their sleeve or their gown.     But have you ever stopped to wonder about your favorite star's tats? What they mean, why they're there, or how they've affected lives and careers? Sometimes, the stories surrounding these markings are more interesting than the designs themselves.   We researched a slew of our favorite celebrities to bring you the tales behind their tattoos. Have a look below. 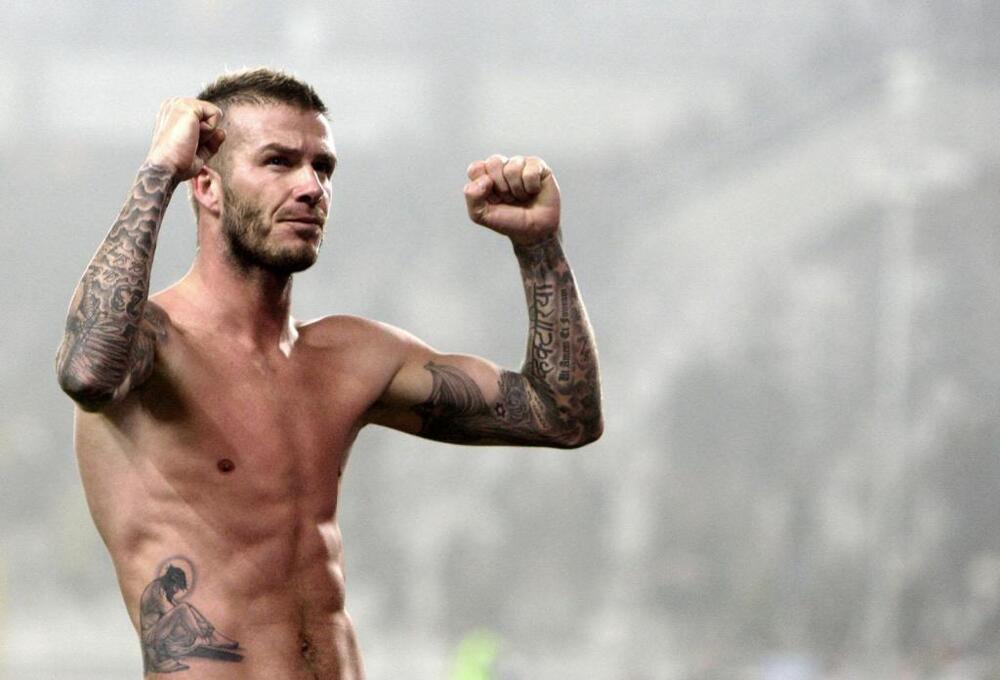 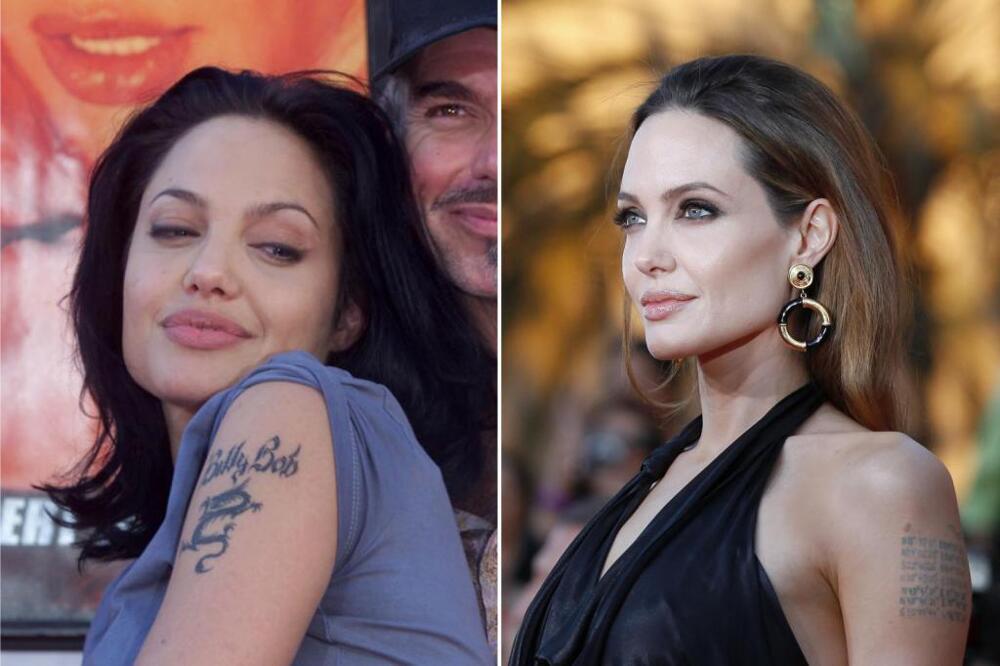 0
Angelina Jolie.
Jolie sports a variety of tattoos all over her body, but perhaps her most famous markings are on her left shoulder. What was once a loving tribute to her second husband Billy Bob Thornton (complete with a dragon) was removed to make room for a list of geographic coordinates. These coordinates, of which there are seven, correspond with the birthplaces of each of her children (Cambodia for Maddox, Vietnam for Pax, Ethiopia for Zahara, Namibia for Shiloh and France for twins Vivienne and Knox) along with the birthplace of her partner (Pitt was born in Shawnee, Oklahoma). 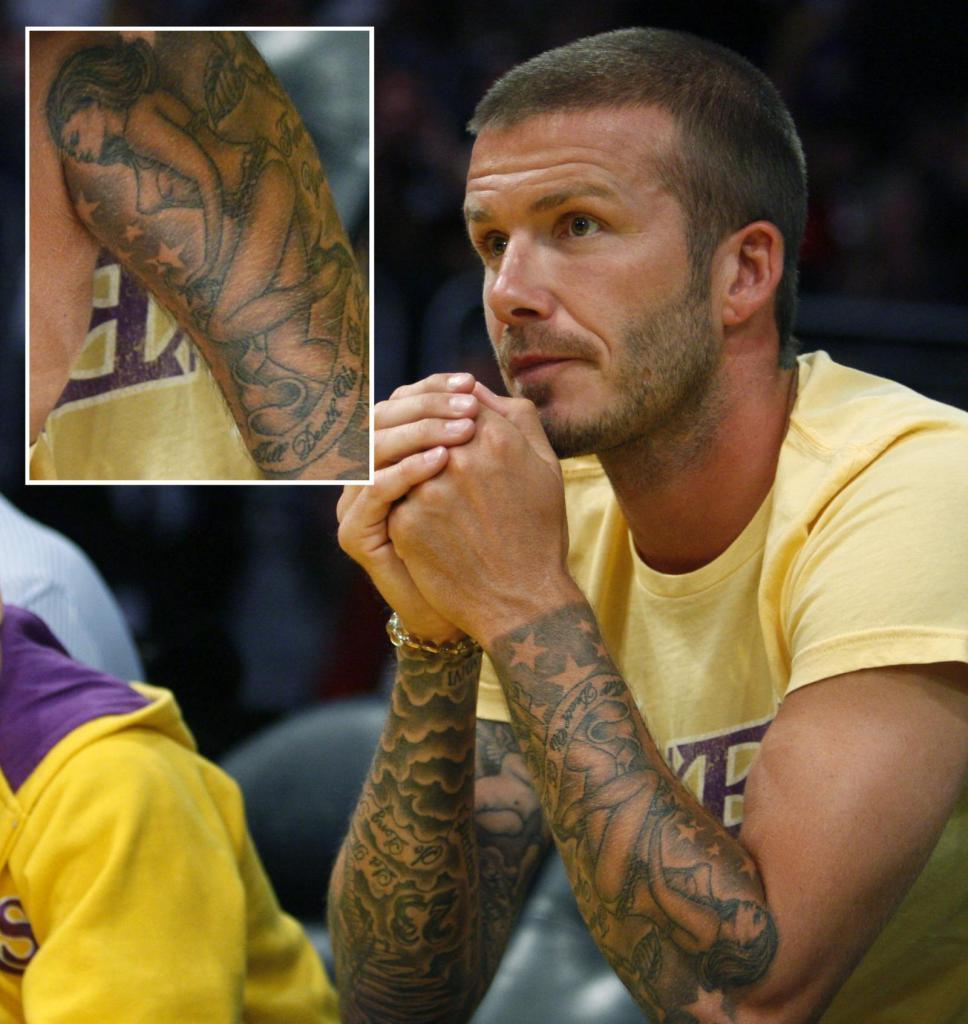 0
David Beckham.
David Beckham has more tattoos than we can count, but one particular design caused a stir in March of 2012. A provocative forearm tattoo of Victoria Beckham adorned with the vow "Til death us do part" (originally David's way of showcasing his marital commitment) popped up in promotional posters for Sainsbury's Active Kids initiative, which is aimed at preschool-aged children. David is currently an ambassador for the program, but some folks were none too pleased when his image — complete with a visible tattoo of his scantily-clad wife — was distributed to 47,000 schools and community groups throughout the United Kingdom. 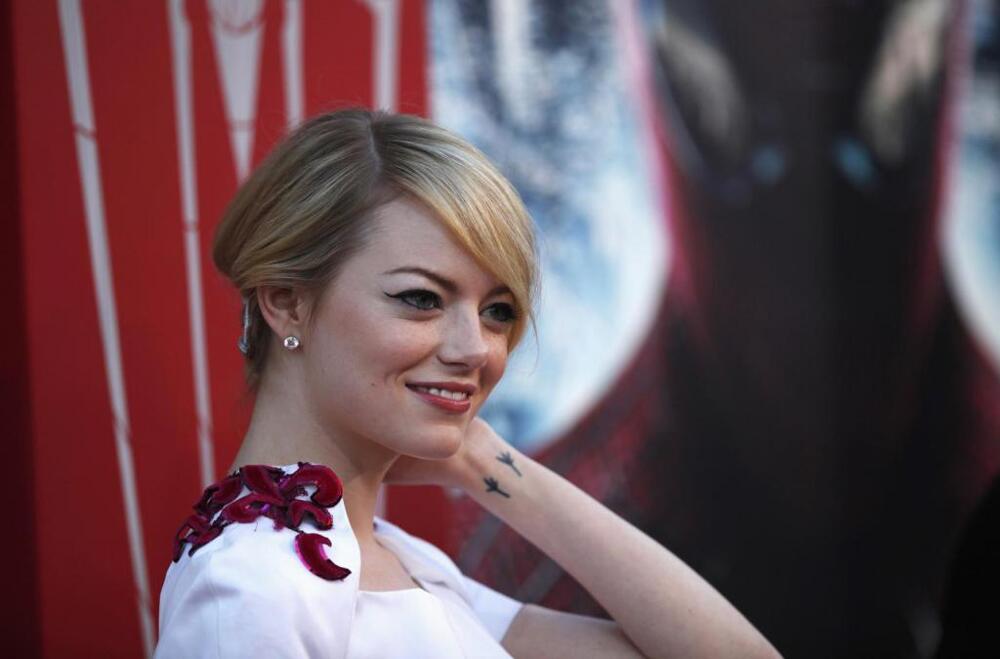 0
Emma Stone.
As actress Emma Stone said during an interview with David Letterman, she and her mother planned on getting matching bird-feet tattoos to commemorate her mother's triumph over breast cancer. Yet that's only half of the story, because her tattoo was designed by none other than Sir Paul McCartney. "My mom's favorite song is 'Blackbird,'" explained Stone. "I wrote a letter to Paul McCartney asking him if he would draw two little bird feet — because he wrote the song — and yesterday he sent them to me." 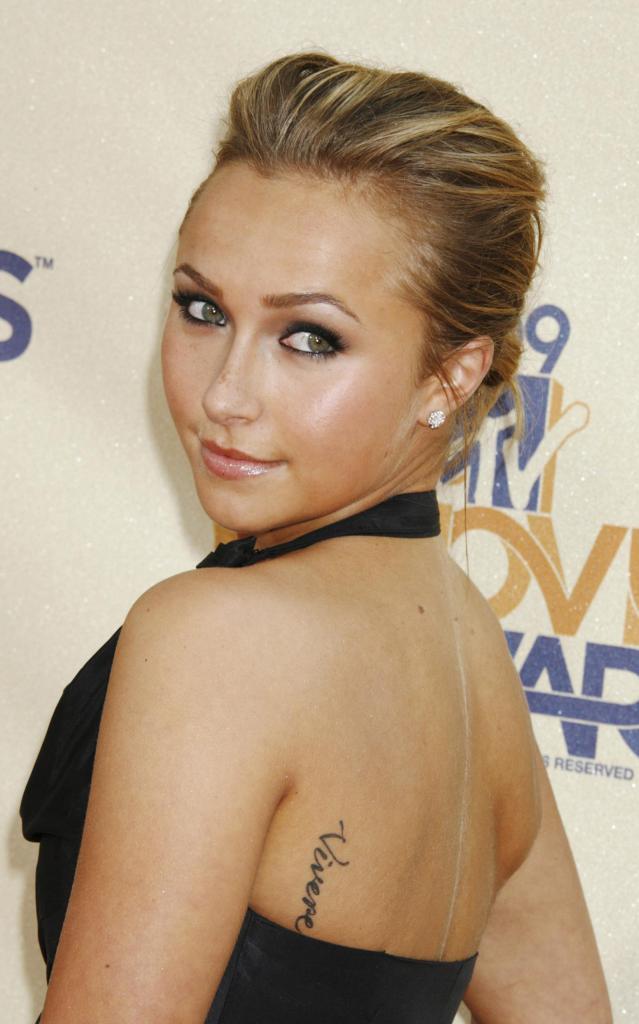 0
Hayden Panettiere.
Actress Hayden Panettiere, known for her role on NBC's "Heroes," has the words "Vivere senza rimipianti," tattooed down the left side of her torso. The phrase means "to live without regrets" in Italian, but ironically, it's spelled wrong; her tattoo features an extra "i" in the word "rimpianti." 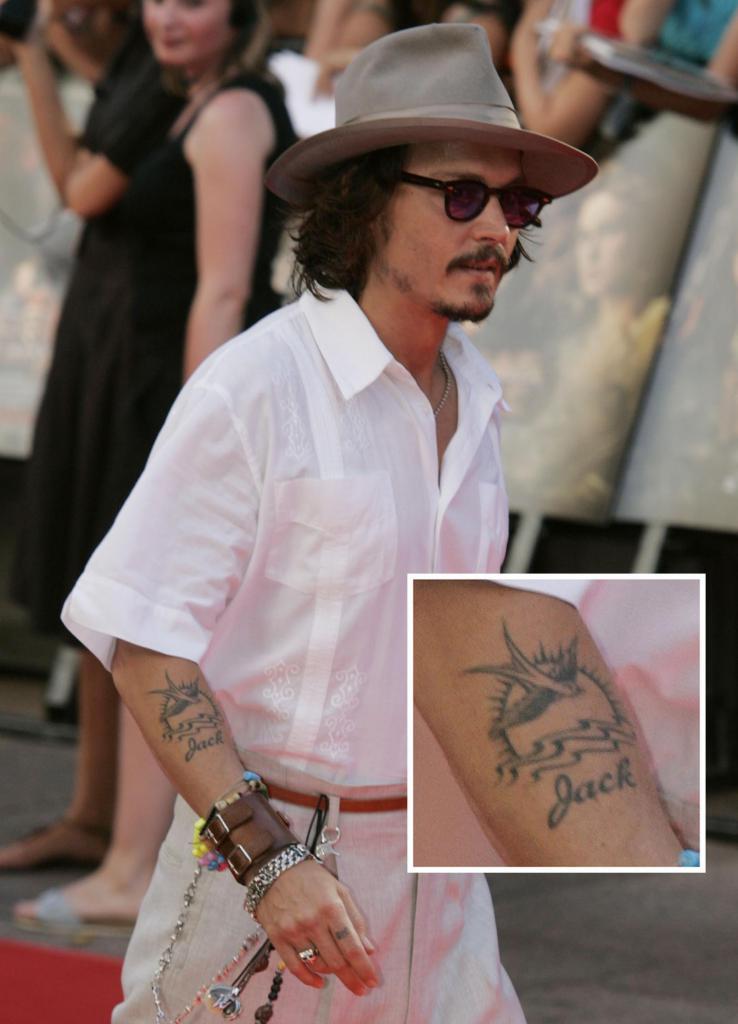 0
Johnny Depp.
Johnny Depp famously had one of his tattoos changed from "Winona Forever" to "Wino Forever" after breaking up with actress Winona Ryder, but his forearm tattoo is here to stay. The design, which features a sparrow flying in front of a sunset with the name "Jack" beneath it, was originally fake, and was drawn on Depp for his role as Jack Sparrow in the "Pirates of the Caribbean" films. In honor of his son, John "Jack" Christopher Depp III, the star had it slightly altered and inked into his skin for real. 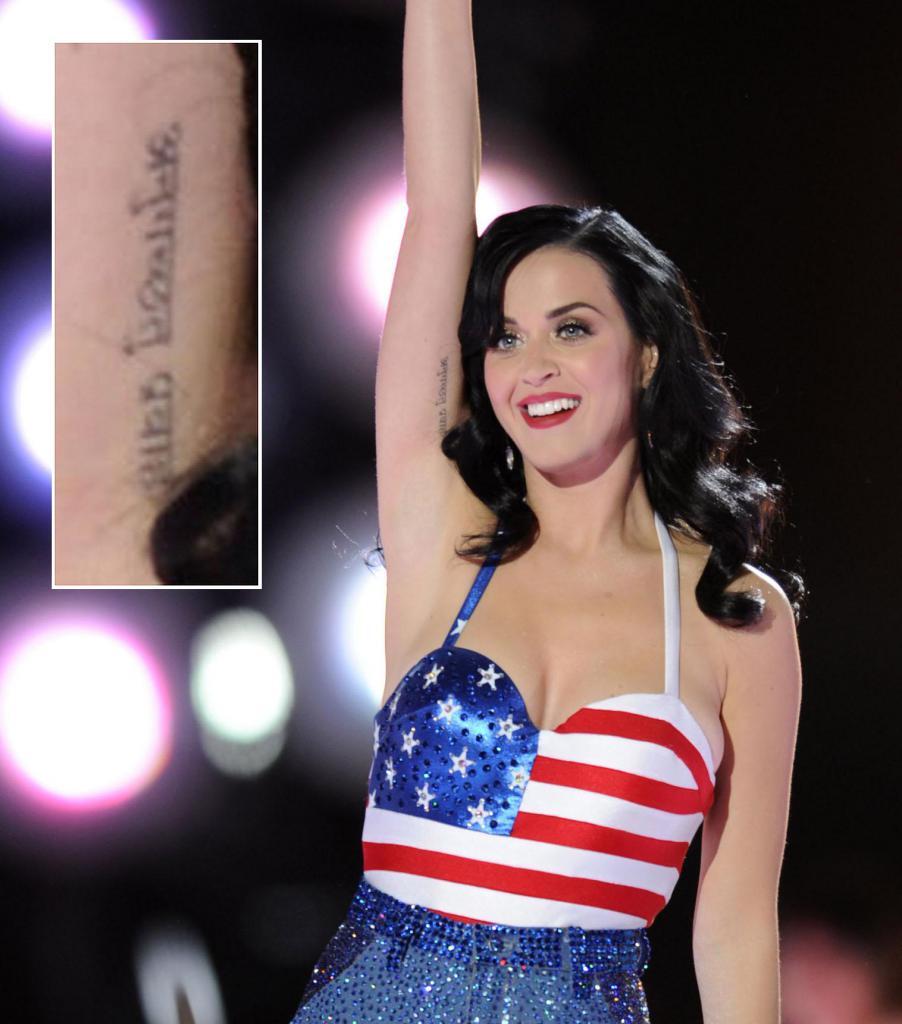 0
Katy Perry.
In addition to the singer’s many tattoos, which include a strawberry on her ankle and the word “Jesus” on her wrist, Katy Perry bears the phrase “Anuugacchati Pravaha” on her inner bicep. The words, which she and ex-husband Russell Brand both inked on themselves during happier times, roughly translate to “go with the flow” from Sanskrit. “That's our motto,” Katy once said in an interview with the QMI agency. “We decided to get it after all the whole engagement in India, which was really beautiful and wonderful. He'd never had a tattoo and I kind of pressured him into doing it.” 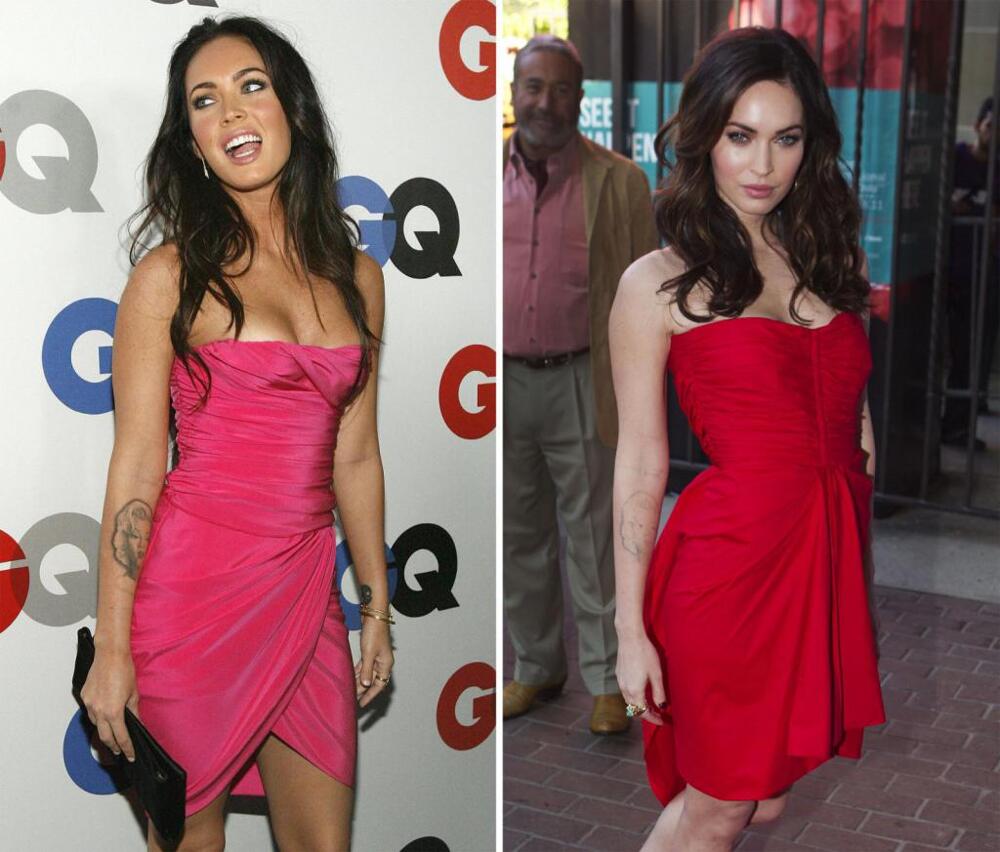 0
Megan Fox.
Among Megan Fox's assorted tattoos, including a yin-yang and a paraphrased Shakespeare quotation from "King Lear," the actress inked Marilyn Monroe's face on her forearm — and now she's in the process of getting it removed. Speaking with Italian fashion magazine Amica, Fox gave her reasons for lasering away Monroe's image, saying. "She was a negative person, she was disturbed, bipolar. I do not want to attract this kind of negative energy in my life." 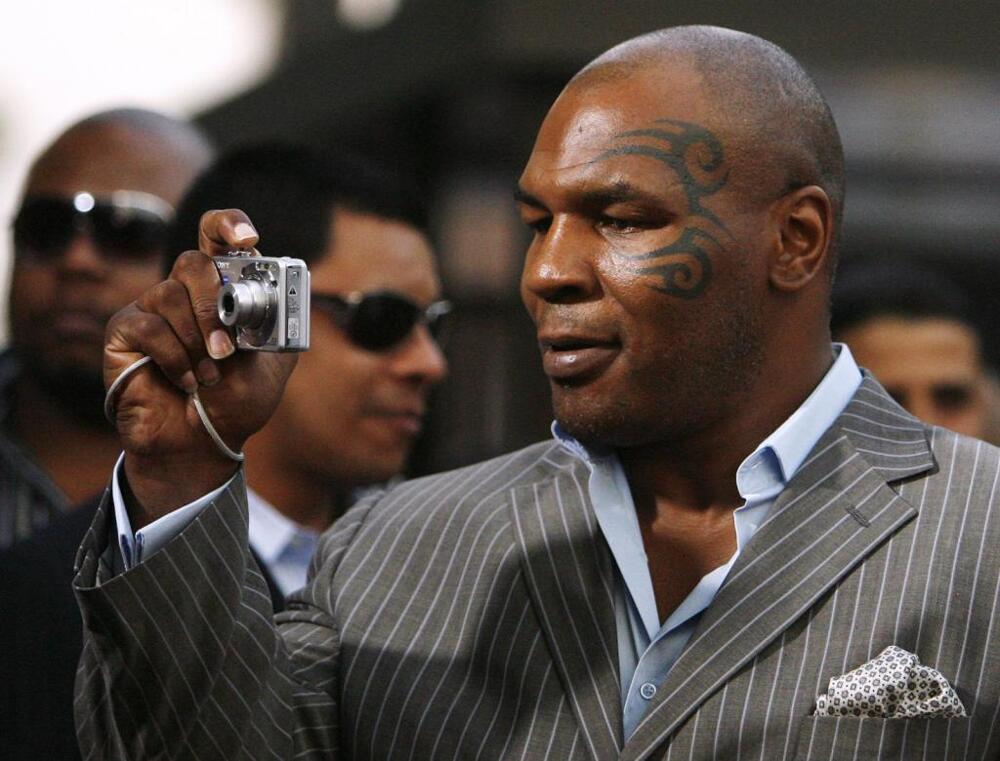 0
Mike Tyson.
Some say that Mike Tyson's face tattoo is reminiscent of the skin carvings worn by the Maori, the indigenous people of New Zealand. Others, like Tyson's tattoo artist Victor Whitmill, have claimed that Tyson's design is the intellectual property of Whitmill and Whitmill alone. Before the release of the film "The Hangover Part II," Whitmill sued Warner Bros. for featuring the design on Ed Helms' character without his permission. The movie studio and Whitmill eventually reached a settlement. 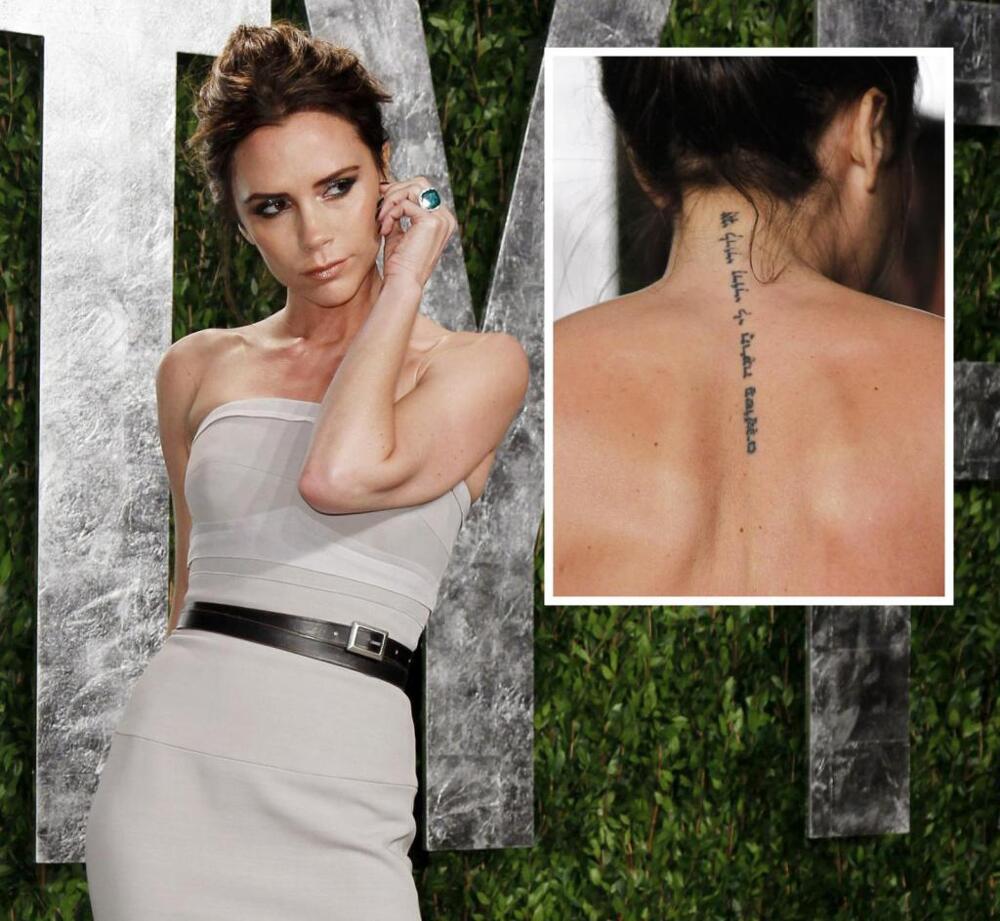 0
Victoria Beckham.
Spice Girl and fashionista Victoria Beckham got "Ani ledodi vedodi li haro'eh ba'shoshanim" tattooed on her neck to commemorate her sixth wedding anniversary with soccer star David Beckham (who inked the very same phrase on his forearm). The Hebrew quote, taken from the Old Testament, translates to "I am my beloved's and my beloved is mine, who grazes among lilies." 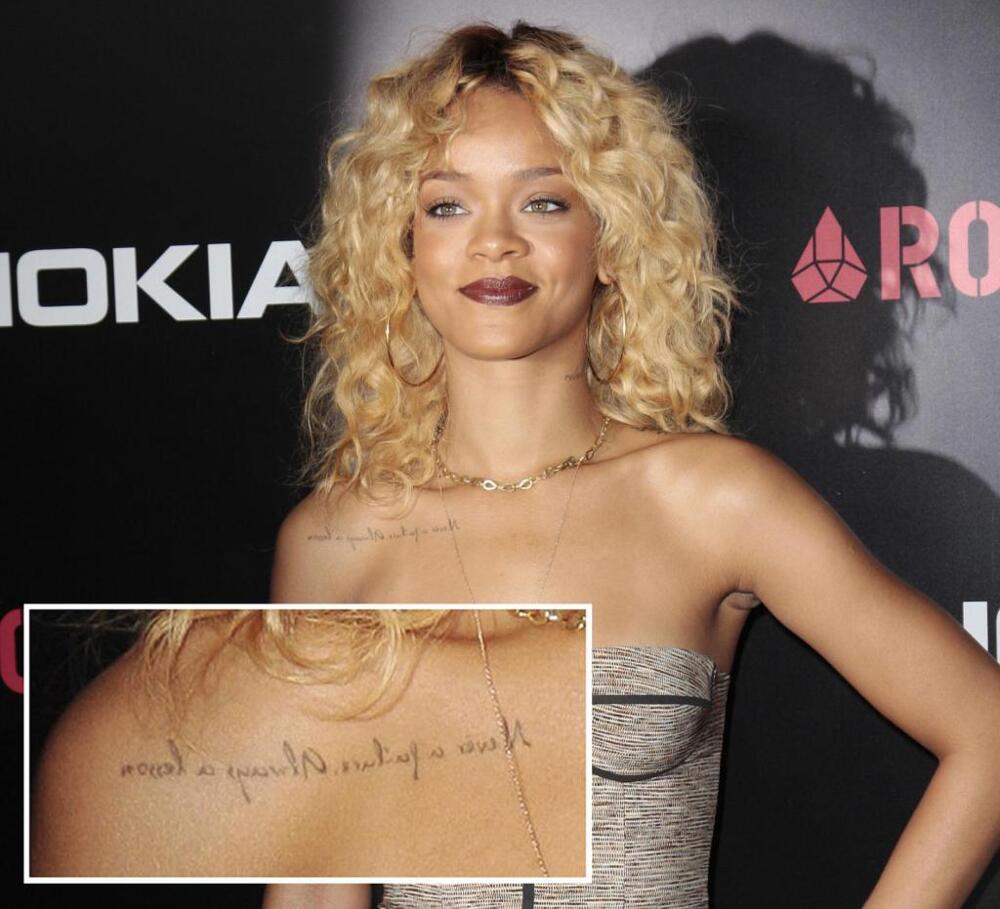 0
Rihanna.
Every time we turn around, it seems Rihanna has a new tattoo. One of her most visible is located underneath her right clavicle, reading "Never a failure. Always a lesson." As Rihanna explained during an interview on "The Ellen DeGeneres Show," it's printed backwards so she can read it whenever she looks into a mirror. "It's basically saying that it's OK to make a mistake," she added. "Just don't make them twice." 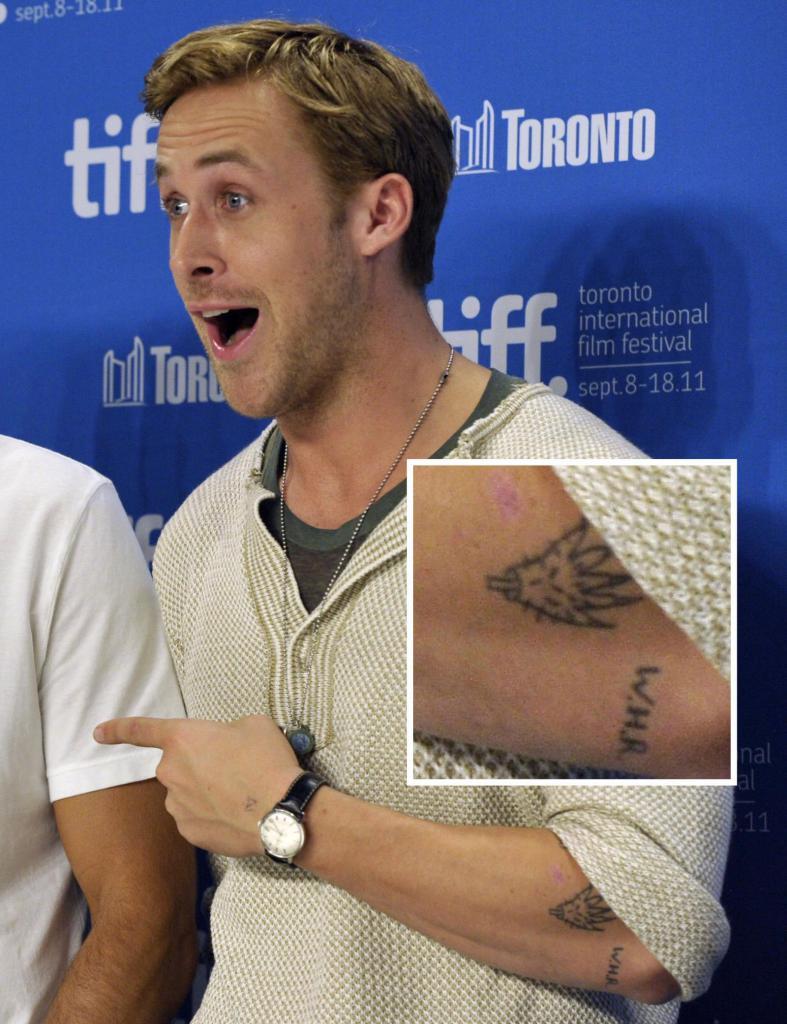 0
Ryan Gosling.
Despite having a tattoo inspired by "The Giving Tree," a book which he says his mother used to read to him as a little boy, Gosling once told the The Guardian that “A tattoo should never be meaningful, because at a certain point you’re going to hate it, and it might as well make you laugh.” He also explained one of his more puzzling additions, saying, "One of my tattoos is supposed to be a monster’s hand dropping a bloody heart, but I did it myself with a tattoo kit so it looks like a cactus.”