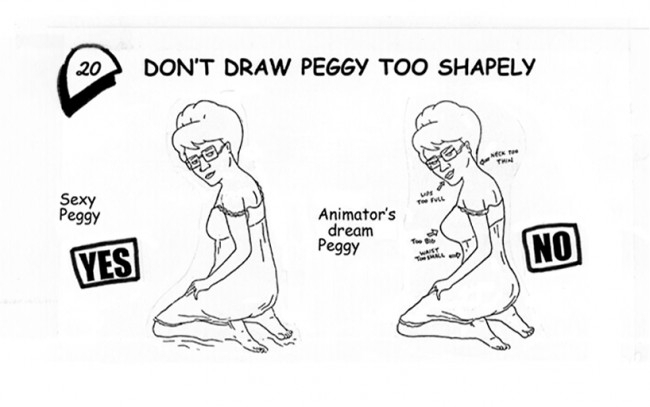 09 jul 2013 14:19
768
6
Thanks to non-stop repeats on Adult Swim, King of the Hill is finally getting the recognition it didn’t receive when the series was first on. For 13 seasons, Mike Judge and Greg Daniels’ animated look at small-town life in Texas quietly hummed along; it was never as showy as its “Animation Domination” counterparts like Family Guy, Futurama, and The PJs, obviously, and was often delayed by NFL games running late, but with the exception of The Simpsons, no Sunday night comedy, on Fox or otherwise, stayed as dependably solid for as long as King of the Hill did.
That’s probably because the animators knew never to give Peggy Hill gigantic cans. So recently we just passed along a King of the Hill animation style guide that’s an interesting look at the do’s and don’t's of designing Boomhower (no smiling, ever), Dale (never flip his shades up), and Bobby (always acting deadpan). It even details the correct way numbers should be drawn on clocks, cash registers, and calculators.
One question left unanswered, though: what’s the best to animate POCKET SAND?