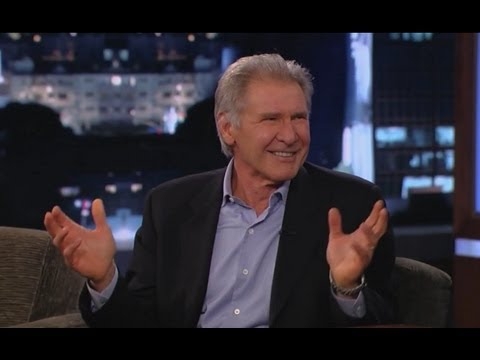 Harrison Ford Has a Spat With Chewbacca on ‘Jimmy Kimmel Live!’

21 apr 2013 23:54
540
1
Harrison Ford appeared on ‘Jimmy Kimmel Live!’ last night (April 17) to talk about his new movie ’42′ — but the host was having none of that. Instead, Kimmel wanted to know about the continuation of the ‘Star Wars’ franchise in which it’s rumored Ford will appear.
While Harrison couldn’t contractually talk about that, he did agree to take audience questions with the caveat that they not be about the movies that made him a household name.

Enter planted audience members dressed as Jedi, Princess Leia and Chewbacca making innocuous queries like, “Are you hungry?”
Things take a strange turn when Chewbacca comes out and Harrison turns to him and says, “You son of a bitch! What do you want? … You’re the one who couldn’t keep it in your furry pants!”
As the conversation progresses, things get messy and Ford storms off in a huff. Make sure to watch the video to see his amazing and stomp-filled exit and just what beef he has with his former Wookiee partner.