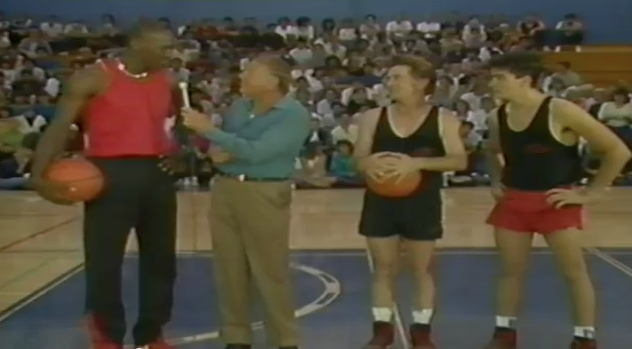 10 may 2013 00:52
1040
2
1
If Obama had an emergency meeting with Congress and initiated a Youtube tax today, I wouldn’t object because YouTube is doing God’s work by providing us with videos like this one. The good folks at Grantland dug up this video of Michael Jordan in a basketball challenge against Martin Sheen and his up-and-comer son Charlie. The video is from 1988 and you can tell it’s old by the fact MJ isn’t wearing his JNCO jeans and Charlie isn’t backstroking Scrooge McDuck style in coke and Hep B.
In the video, Jordan tries to beat the Sheens in a three-part competition where he sets ridiculous handicaps for himself (free throws with his eyes closed? Two on one to 10 with the Sheens spotted five points?) and actually loses. You just have to imagine His Airness was secretly fuming over the fact he lost. If he didn’t immediately challenge them after cameras stopped rolling, he may still hold a grudge against the Sheens to this day.
In fact, Jordan was so angry about losing that he vowed if he ever did any work with one of the Sheens he’d wear a Hitler mustache and make everyone go along with it. You go, MJ. You always win.