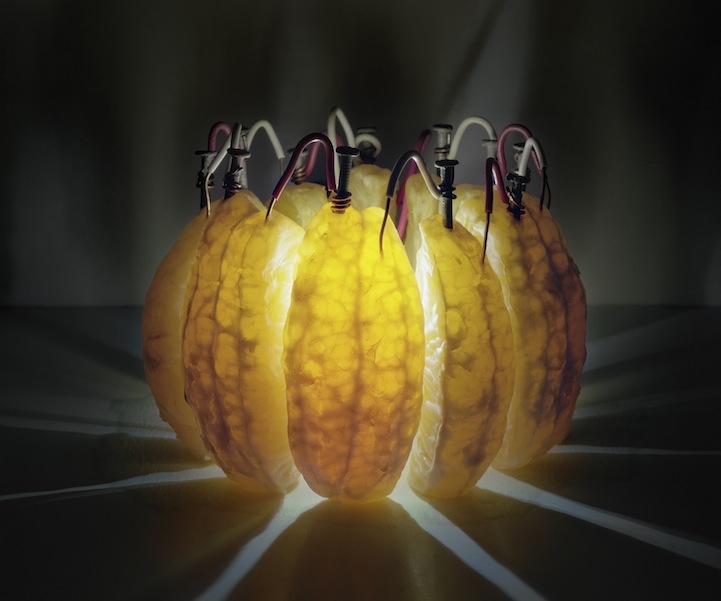 Back to Light is a creatively scientific series by photographer Caleb Charland that explores the naturally electrifying power of ordinary objects like fruits and loose change. The images in the series features a number of materials, including consumables readily found in one's pantry, generating enough power to light lamps and LED lights. We had previously seen Charland light a lamp with 300 apples, but now the grocery list has expanded to include oranges, lemons, limes, grapefruits, pomelos, and vinegar. 0
Смотреть все фото в галерее
The ongoing photo project, which began in 2010, was initially inspired by the powerful simplicity of the potato battery. The science enthusiast explains, "By inserting a galvanized nail into one side of a potato and a copper wire in the other side a small electrical current is generated. The zinc coating on the nail gives off electrons due to the electrolyte environment within the potato. These electrons then travel along the copper wire providing the electrical voltage to illuminate a small light emitting diode. The utter simplicity of this electrical phenomenon is endlessly fascinating for me."

Battery From a Single Potato 0
Additionally, Charland reflects on his own project by saying: "This work speaks to a common curiosity we all have for how the world works as well as a global concern for the future of earth’s energy sources. My hope is that these photographs function as micro utopias by suggesting and illustrating the endless possibilities of alternative and sustainable energy production." 0
Charland tells us that he hopes to expand his project this summer by making "little hydro electric generators and installing them in the landscape." Until then, the photographer is showing a selection of his works at Schneider Gallery in Chicago and has a solo show coming up at Gallery Kayafas in Boston from May 17th through June 7th. Electricity From a Ring of Apples Vinegar Batteries with Glassware and Shelf