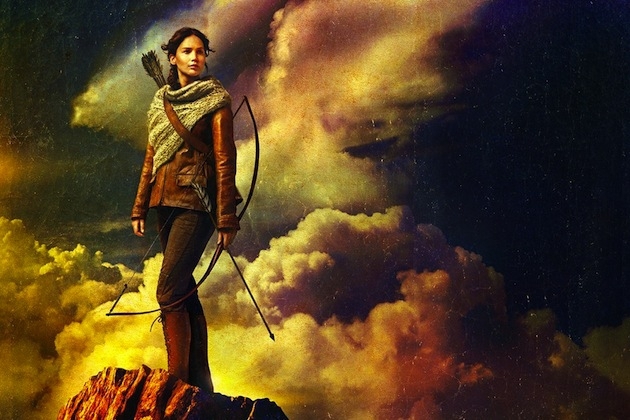 Looking like her old Katniss self again, Academy Award-winning actress Jennifer Lawrence stands tall and strong in the new poster for ‘The Hunger Games’ sequel, ‘Catching Fire.’ In the image, J.Law poses dramatically on a cliff while learning that one day everything the light touches will belong to her. (Or is that ‘Hamlet’ with lions? We always get those confused.) Behind her, the CGI clouds form a shape reminiscent of the Mockingjay, the symbol for which the semi-reluctant revolutionary Katniss is known. The tagline above her head reads, “The sun persists in rising, so I make myself stand,” which is in the opening chapter of the second book. The storyline therein involves how Katniss deals with her new, post-Hunger Games life — including training children how to survive in a fight to the death. (Thanks, allusions to ancient Rome, for your super uplifting young adult film.) Check out the entire poster in all its glory below.