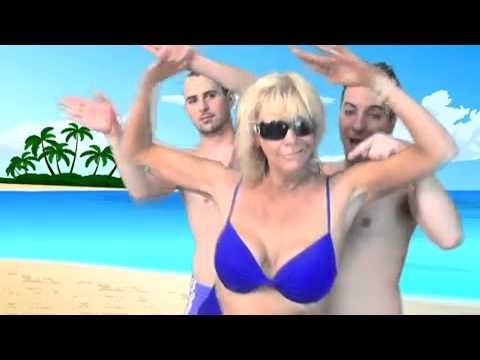 Last time we checked in on Tan Mom Patricia Krentcil, she had released a rap song, ‘It’s Tan Mom,’ to which the ‘Chelsea Lately’ staff couldn’t help but bust a move. Now the full song is out, and it’s worse than you thought. In the 3-minute video, Krentcil dances around in a leopard print dress (the flames of hell flickering behind her) and, unfortunately, a bikini and wig, slurring lyrics like: “Where do you want / I’ll give you a treat / To see my goodies brown / I wanna get get get get my tan on.” In between autotuned choruses about being outside birdwatching in lieu of in a tanning booth, she claims she’s “sexier than the teen mom” (presumably Farrah Abraham) and “hotter than the Octomom.” At one point she’s also in a bedroom being groped with multiple crosses affixed to the wall behind her, and towards the end of the video, an unidentified male pops up behind a podium and says, “Don’t judge me, don’t make a deal. Don’t make a deal because I am saying it to you. I’m saying it to you. Let it be the way it is.” We have no idea who he is or what he’s talking about, but he is in Tan Mom’s music video. (Sorry, dude. Consider yourself judged.) Thankfully, some merciful soul took pity on the masses and decided not to release this thing in high definition — a move worthy of a ticker tape parade.