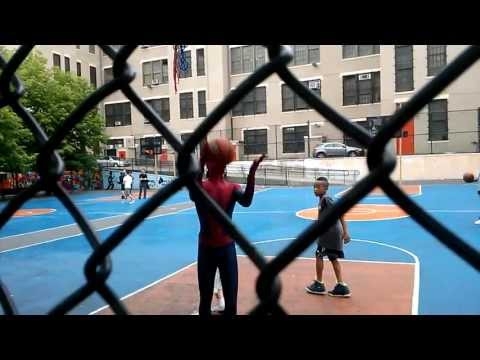 28 may 2013 12:34
3802
2
Okay, if you didn’t love Andrew Garfield as Peter Parker before, we bet you will now. ‘The Amazing Spider-Man’ star took a break from filming — but not from his Spidey suit — to play basketball with kids.
And it’s on video.
Garfield doesn’t seem to be too skilled at hoops, though he may well be toning his game down to accommodate the youngins’ (or the suit).
You can’t see the British actor’s face, but several sources close to the action (via Digital Spy) say it is, in fact, Garfield, and that he and girlfriend Emma Stone were taking a break from filming the sequel to ‘The Amazing Spider-Man’ nearby.
Stone can also be seen briefly in the clip walking a dog. So cute!
“This is the real deal,” one YouTube uploader insists. “Andrew Garfield, taking it to the hole, buries the jumper on the two kids.”