14 jun 2013 14:00
1210
2
1
Ironic modern day renaissance man and professional dicknoser James Franco recently painted a mural in Williamsburg (because of course he did) depicting himself and all his co-stars in his new apocolyptic buddy comedy, “This Is The End” (opens today, possibly excellent).
But Franco apparently didn’t run any of the likenesses by his co-stars, as Jonah Hill — who seems a bit temperamental — is a little bummed out about being depicted as a morphine addict from Picasso’s blue period, as he explained to Conan last night after telling stories of being owned in a dark theater and making the mistake of asking Ice Cube who the greatest rapper of all-time is. Mural stuff starts around the 3:30 mark. 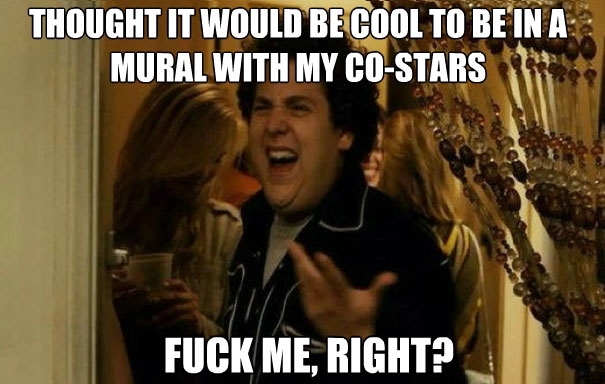