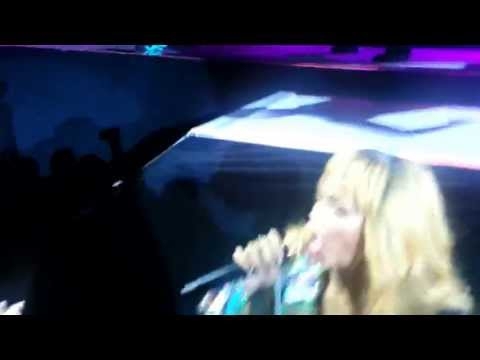 Rihanna Smacked a Grabby Fan With Her Microphone In England [VIDEO]

RiRi, in Birmingham during the UK leg of her Diamonds world tour, took a detour through the crowd during a performance when an overzealous fan grabbed hold of the singer and held on for dear life.
Try as she might to keep walking, Rih couldn’t escape the person’s iron grip — and rather than let her security detail handle it, she eventually turned to strike the subject with her magical glittery microphone, breaking their hex on her.
According to the New York Daily News, Rihanna had good aim and hit the concertgoer’s “face or head.” Ouch. (To add insult to injury, the singer allegedly started the show two hours late, too.)
Ri’s camp is giving radio silence. But if history is any indicator, we already know she’s unapologetic.