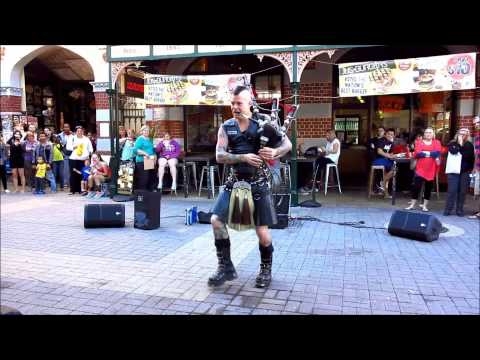 01 jul 2013 15:22
905
1
For a funeral or Thanksgiving Day parade, bagpipes are great. But for a rock song? An Australian man will leave you thinking differently after watching his performance of AC/DC‘s ’Thunderstruck’ on the instrument. Making the whole thing even more awesome: The bagpipes shoot fire.
Cam McAzie, a Perth native who has been playing for more than 15 years, is better known as the Badpiper. He’s released three albums (at least according to his Facebook* page), including the recent ‘Burn,’ which includes his version of ‘Thunderstruck.’
The video has picked up quite a bit of attention — which seemingly confounds McAzie. “This viral video has spread so far and so wide,” he wrote on Facebook*. “I’m not a very good tech guy, so if anyone has any info on how far this has reached please let me know. And a big welcome to all the new fans, welcome aboard!!”
But it didn’t take long for him to embrace his new fame. “I WANT LETTERMAN!!!!!!!” he posted a mere 30 minutes later.
* Запрещены в РФ