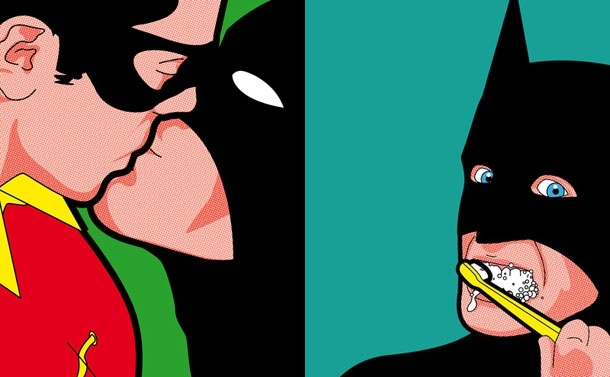 French illustrator Grégoire Guillemin has taken his love of superheros and added a bold new twist to the art form. Rather than showcasing them in the midst of battle or fusing supervillains with their modern-day equivalents or even perhaps incorporating them into historical artworks, he’s simply decided to reveal their intimate and private lives. His illustrative series titled ‘Secret Life of Heroes’literally pops out of the screen at you, not only because of his bold colour set but also because of the illustrations themselves… Batman and Robin get it on, Snow White kicks back with a cigarette, Wonder Woman seductively sucks on a banana and all whilst Catwoman indulges on some girl on girl action with Poison Ivy. It’s a vivid blast of colourful, sexy and irreverent fun – best of all, you can get your hands on these artworks (and many more) for under $30 via Greg’s Society6 page. Trust us, your walls will thank you for it.