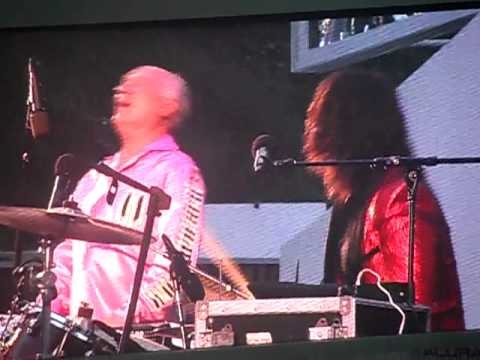 17 jul 2013 18:16
697
1
Do I need to even mention? You know, how awesome of a person and musician Dave Grohl is? I shouldn’t really even have to mention it at this point, as it should just be implied. Like, I could pass a random stranger on the street and ask, “Hey, who’s awesome?” and he’d respond, “Dave Grohl” and we’d just keep walking. It’s common knowledge, like 2+2=4 and Spicy Nacho Doritos > Cool Ranch Doritos. This time, Grohl proved his awesomeness by getting back behind the drums to play Little Richard’s “Lucille” during the band Sha Na Na’s warm-up set at the Grease Sing-a-Long at the Hollywood Bowl over the weekend. The band, of course, took on the name Johnny Casino and the Gamblers for the classic John Travolta film and was responsible for six songs on the soundtrack. But as random as this seems, the collaboration makes perfect sense – Sha Na Na frontman John “Jocko” Marcellino is Grohl’s uncle-in-law. See? You learned something new today.