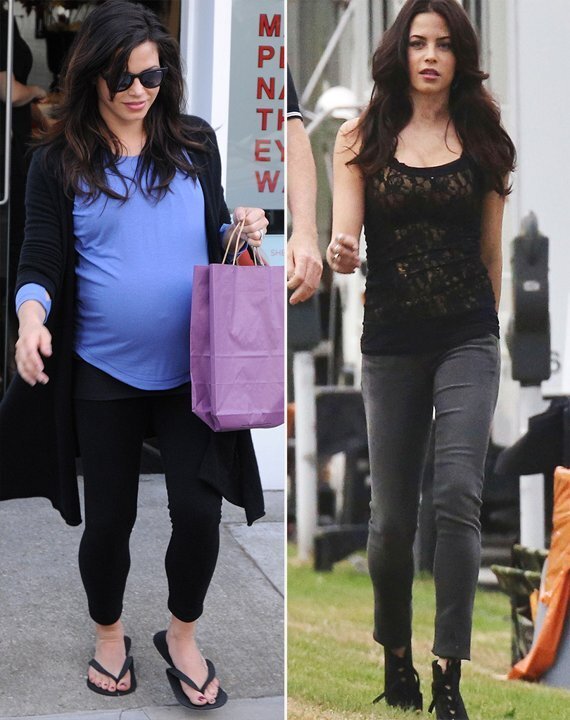 With Hollywood's baby boom comes the inevitable pressure to lose the weight. Take a look at these stars who slimmed down and learn how they did it. 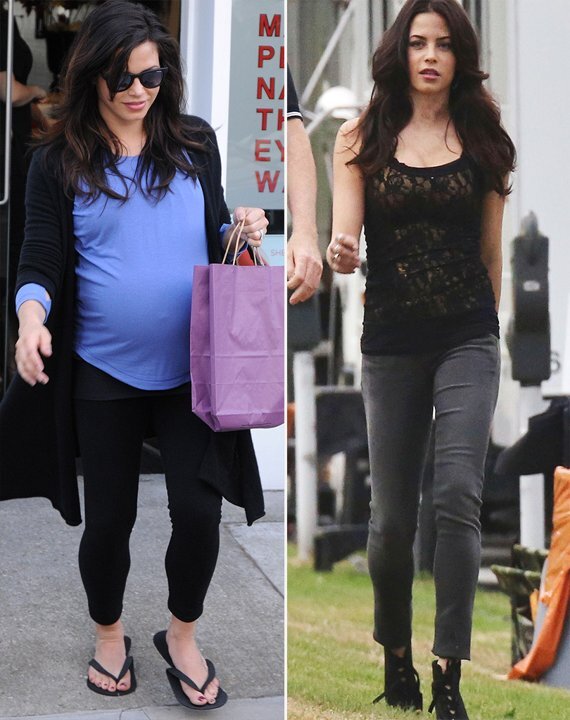 0
Смотреть все фото в галерее
Jenna Dewan-Tatum showed off her slimmed-down figure less than two months after giving birth to daughter Everly on May 31. Channing Tatum's wife has said she was perfectly comfortable with her growing pregnancy figure. "I thought my body was going to change so quickly with pregnancy that I’d freak out. But it was really gradual," the 32-year-old actress told Glamour in April. "There’s a reason women are pregnant for nine months; by the end, you're ready to have this baby." Tatum — People magazine's reigning Sexiest Man Alive — apparently told Jenna to eat whatever she wanted while pregnant. 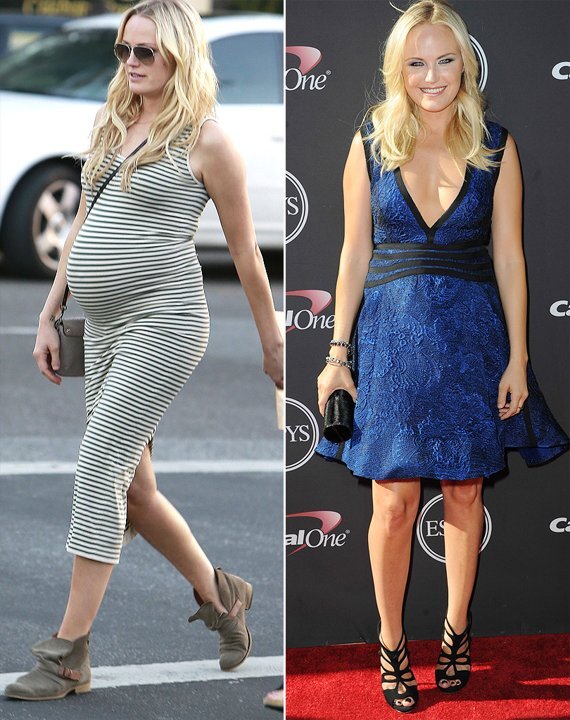 0
Three months after giving birth to her first child, son Sebastian, Malin Akerman has already slipped back into a bikini. The 34-year-old actress made sure to stay fit despite pregnancy cravings. "It feels like your gut is hung over all the time," Malin said. "You crave the most random things. Fries, grilled cheese sandwiches and everything that's bad for you. But you're supposed to keep yourself in shape so you can push it out!" 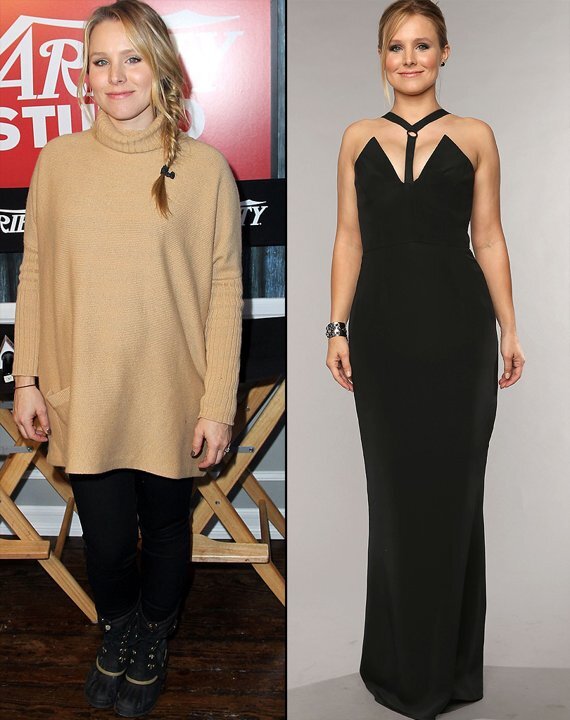 0
The "Veronica Mars" actress gave birth to daughter Lincoln in March, and three months later Kristen shared her not-so-tricky tips for losing the baby weight. "I got off my butt and got to the gym," the 33-year-old told USA Today. "I started working out when the doctor told me that I could and I kind of put the pedal to the metal. I'm not doing anything unhealthy and I never would. But I'm trying to eat clean and keep everything on track as best as possible." 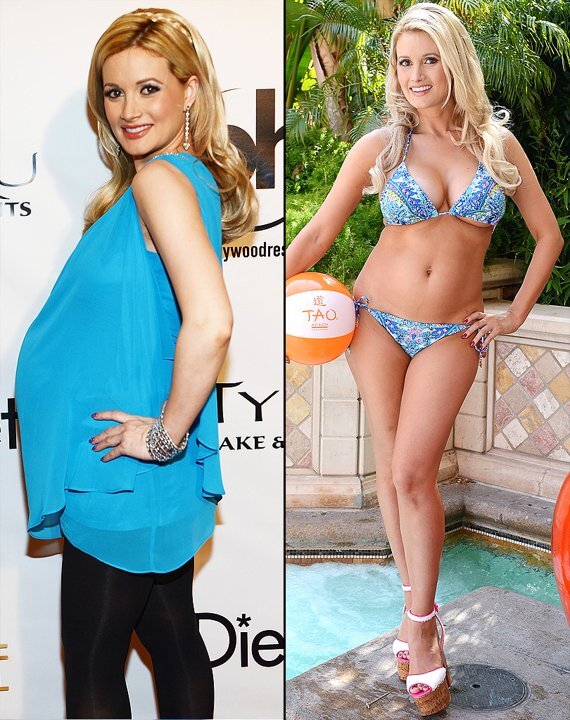 0
Holly Madison gained 40 pounds while pregnant with daughter Rainbow Aurora, and Hugh Hefner's ex-girlfriend shed 30 of those pounds during the initial six weeks after giving birth in March. "I used to eat poorly, and I started paying attention because my baby's health was now dependent on it," the 33-year-old told Life & Style. The former Playboy model revealed she stuck to 1100 calories a day, wore a corset around the clock, and hit the gym to lose the weight. 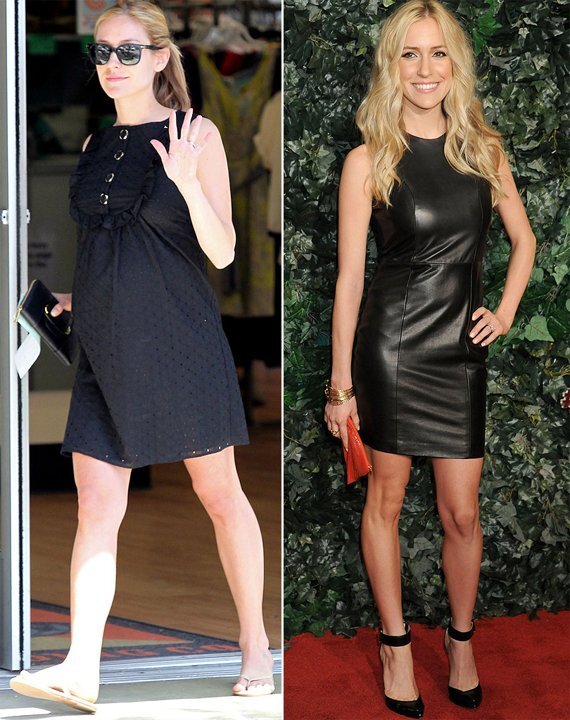 0
Eleven months after giving birth to son Camden, the former "Laguna Beach" star is back to her pre-baby body. "I've always been a really healthy eater. I think when I got pregnant I took it up another notch, just because I was so aware of what I was putting in my body," the 26-year-old has said about how she lost the weight. "I've just maintained that since I've had [Camden]. And honestly, I rarely drink alcohol anymore, which helps too. It's just empty calories." 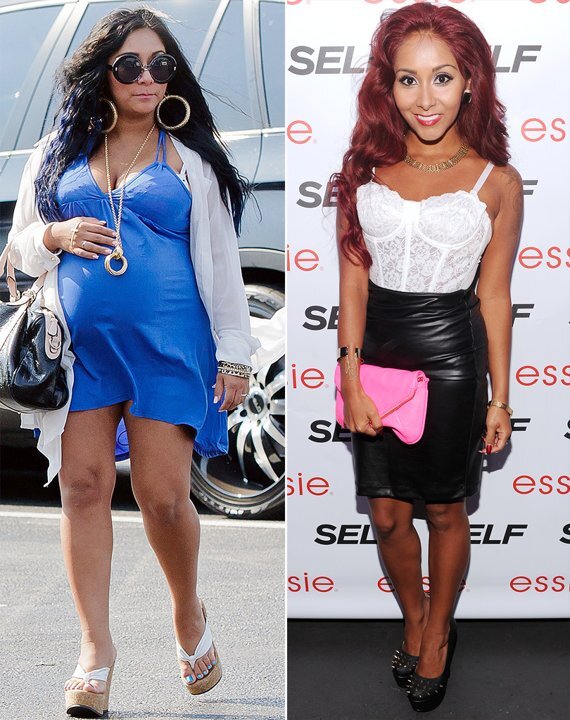 0
It's been nearly a year since Snooki gave birth to son Lorenzo, and the "Jersey Shore" star has lost about 50 pounds since. She posted the following message on Instagram*: "To all my pregnant ladies, IT IS possible to get your body back and better than ever after having a baby! All you need is motivation to workout & eat healthy! Anything is possible." The secret to her success? The 25-year-old works out with a trainer five days a week, eats more protein, and (believe it or not) she's cut out alcohol. 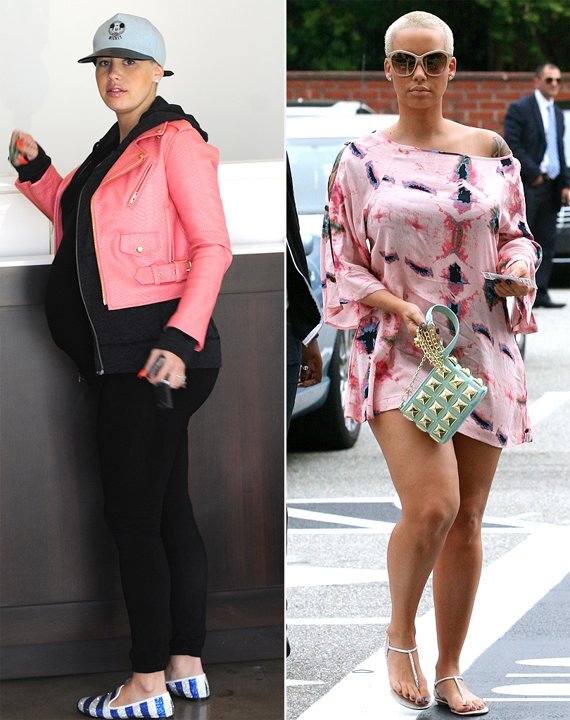 0
Three months after giving birth to son Sebastian, Amber Rose hit the gym to get her body back, telling E! Online that she weighed 202 pounds by the end of her pregnancy. "I have a really good personal trainer," the 29-year-old said in May, adding she works out for an hour and a half every day. "It's hard to get off baby weight. It's a different kind of weight because for nine months you stretch your stomach out and then it's hard to get that back. I'm working on it. I lost like thirty-some pounds already." 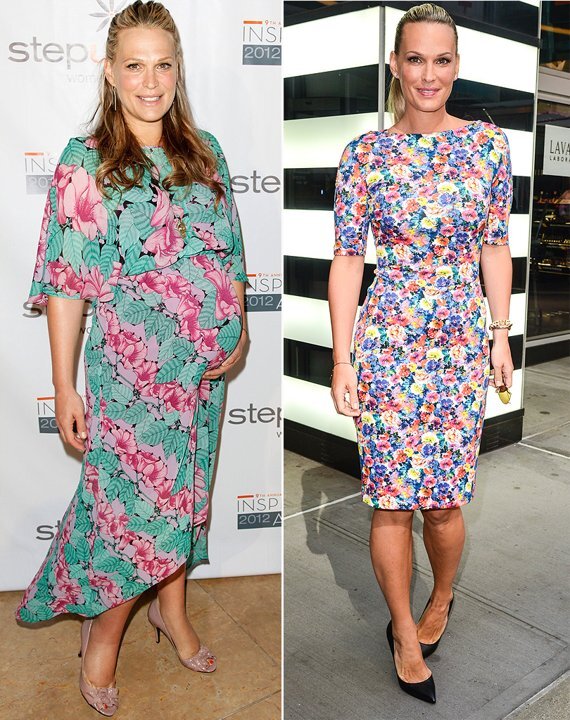 0
Molly Sims gave birth to her first child, son Brooks Alan, in June 2012 and struggled to get back in shape afterwards. "I didn't step on a scale until I gave birth and I didn't realize I had gained 72 pounds so it was definitely a struggle," the 40-year-old told "Entertainment Tonight" in April. "It was depressing and I didn't want to go out of the house." Sims revealed last month she "killed" herself to lose the weight and is now back to 130 pounds. "Fiber was key," she said. 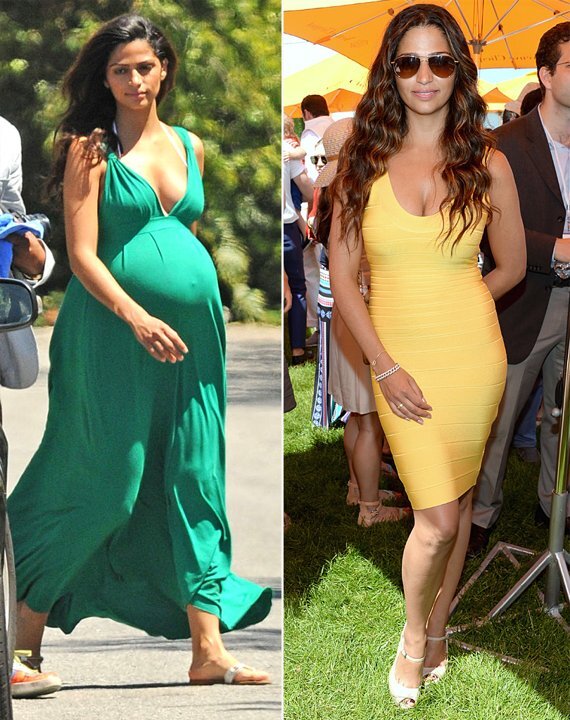 0
Matthew McConaughey's wife gave birth to their third child in December, so clearly Camila Alves has her pregnancy weight-loss routine down. The key? It's all about diet. "It's amazing how much eating the right things and drinking enough water will actually do for your body," Alves, 30, told reporters about her slim look just eight weeks after giving birth. 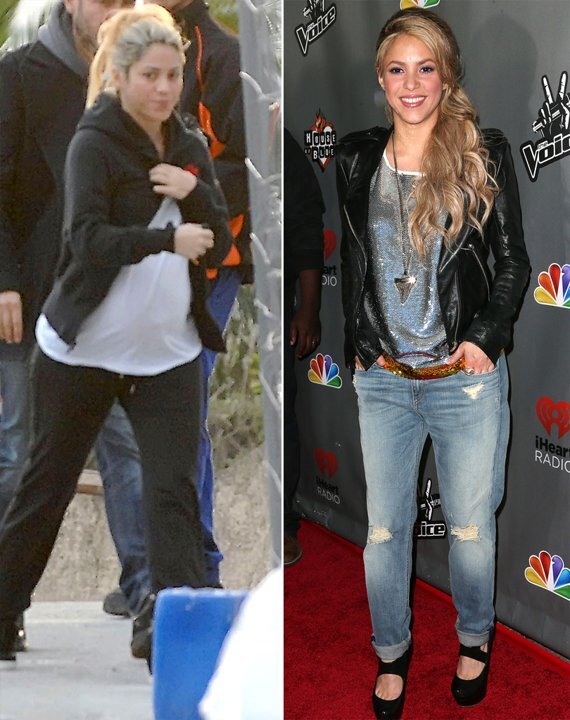 0
Shakira gave birth to son Milan in January and the 36-year-old looked better than ever on "The Voice" months later. Shakira's trainer told E! Online that the singer worked out four to five times a week and that dancing was her go to workout. "Dance is not only fun, but it can be an incredibly difficult and effective option for cardio," Anna Kaiser said. "When combined with an effective strength and flexibility program, you get a fantastic well-rounded program with amazing results." 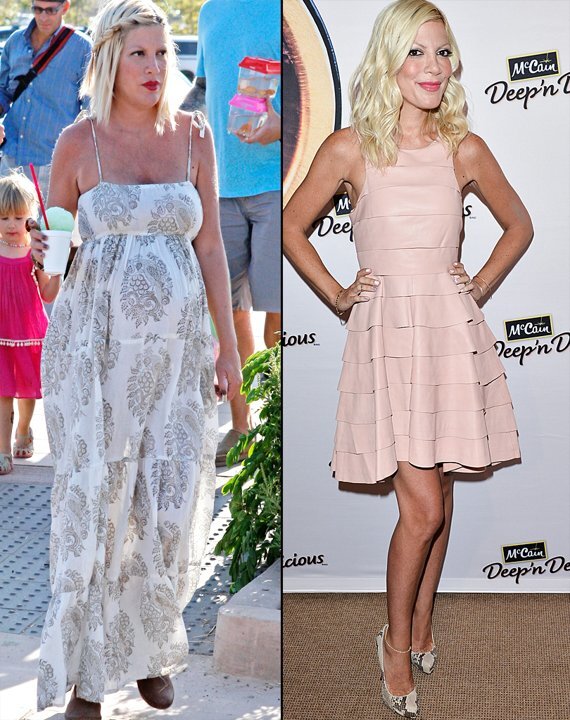 0
After giving birth for the fourth time last August, Tori Spelling was pretty much an expert at getting back in shape. The "Beverly Hills, 90210" alum only gained 30 pounds with son Flinn and she lost 45 lbs eight months later. Not bad considering Tori spent four months on bed rest with a severe form of placenta previa. "The last thing on my mind was getting my body back," she told Us Weekly. "I feel like I took off the weight safely, and I'm totally happy here. I think my stomach went back pretty well!"