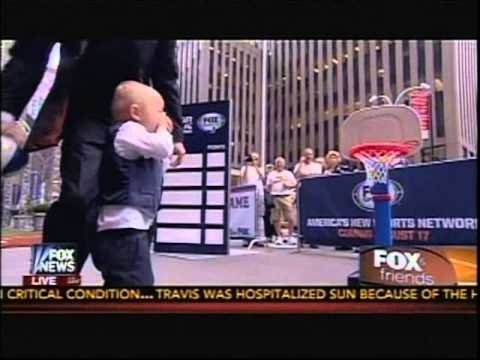 29 jul 2013 02:34
983
1
A few things:
1) Toddler basketball prodigy Trick Shot Titus is my dude. He had a YouTube video that blew up, and since then he’s been making the rounds on talk shows and such, just raining buckets and looking adorable. No one speaks ill of him in front of me. NO ONE.
2) I haven’t ruled out the possibility that he has acquired the talent of an NBA player via laser or magic basketball.
3) He appeared on Fox & Friends this morning to put on one of his patented shooting demonstrOH MY GOD LOOK AT HIM IN HIS LITTLE VEST AND TIE LIKE HE’S A TINY BUSINESSMAN OR SOMETHING.
4) After he hit eight shots in a row, Fox & Friends anchor Brian Kilmeade retrieved the bouncing basketball and lobbed it to him, and the ball hit him in the face and made him cry.
5) Brian Kilmeade is history’s greatest monster.