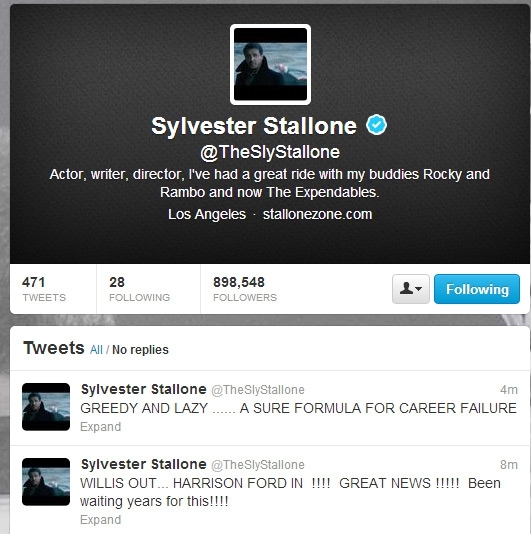 07 aug 2013 00:06
1298
1
After going Twitter silent since July 24th, Sylvester Stallone screeched back into action today, announcing that The Expendables 3 is dropping Bruce Willis and picking up Harrison Ford. Between Harrison Ford starring and Mel Gibson playing the villain, it promises to be the grumpiest set since Terminator 4.
But minutes after Stallone’s Harrison Ford tweet went up, a second tweet seemed to hint that a beef’s a brewing, with Sly tweeting “GREEDY AND LAZY… A SURE FORMULA FOR CAREER FAILURE”. (I’m not sure if Sly always has the caps lock on, or if the keyboard just does that automatically after a certain level of HGH).
Either way, the question remains: are Sly and Bruce Willis beefin’? It would sure seem like it, though it’s hard to say how much Bruce Willis’s past history of being kind of a pain in the ass colors that view. And if “greedy and lazy” was meant to refer to Bruce, in Bruce’s defense, I always assumed wanting to get paid lots of money for not working very hard was The Expendables‘ entire raison d’etre. (I used a French phrase here to keep Sly from tearing my arms off and beating me to death with them).
The Expendables 3 will be directed by some dude and open at a future date.