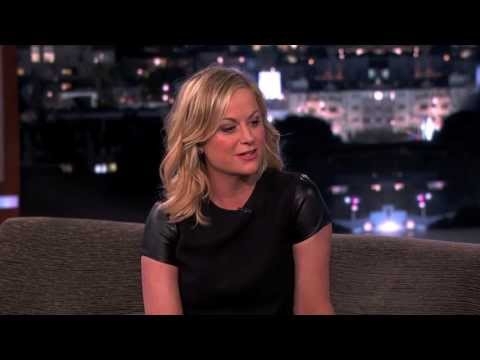 18 sep 2013 13:14
Tags: artistic   awesome   cool   funny   random   silly   sweet   weird
1692
4
Not so long ago I mentioned that Tina Fey should be the only person allowed to talk about her children. Well, my list has fittingly been expanded to two with the addition of best person ever, Amy Poehler. Last night real life Leslie Knope appeared in multiple segments on Jimmy Kimmel Live with the moment of moments coming in the above clip where she impersonates here uber bankable red haired son with a lisp getting tricked into saying “spicy salsa” over and over again. It’s funny because he doesn’t realize he’s being tricked into doing things for others’ amusement. That starts at the :55 mark.
The rest of her appearance was almost as delightful, so let’s run through it…

First there was Amy and Stephen Merchant pitching in on the monologue.
Then there was part one of her interview where she and Jimmy discuss birthdays and how cellphones are like sh*tty significant others.
And finally, talking Emmys and — most importantly for Parks and Recreation fans — how Chris Pratt’s busy acting schedule led them to doing the London premiere. Oh, and there are a few spectacular French and Swedish impersonations tossed in there because why wouldn’t there be?