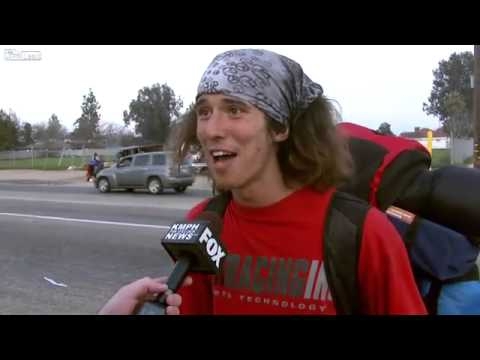 04 feb 2013 18:52
420
1
In most scenarios we’re totally against the idea of picking up a hitchhiker. These people can easily be crazed maniacs. But in the case of this video, it was the driver who turned out to be insane.
Kai — a homeless hitchhiker — was hitching a ride in West Fresno with a man who suddenly began proclaiming he was Jesus Christ. Yep, the Lord. “Jesus” then spotted an African American PG&E worker and smashed his Oldsmobile into him, pinning the employee against his own truck merely because of his race.
JC then took his wrath unto a woman, getting her in a headlock, to which our fearless and homeless hiker gave Jesus the axe — literally. Kai started hitting the man on the head multiple times with a hatchet.
Looks like this instance of picking up a hitchhiker turned out to be a Godsend. If only there were more Kai’s in the world. But the best part? His interview.