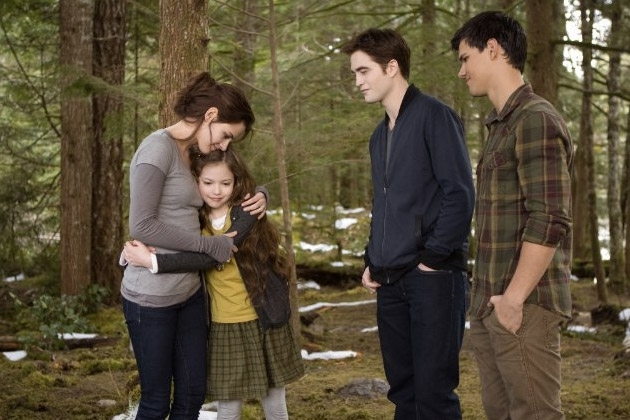 ‘Twilight’ Nominated for All the Razzies Ever (1 photo + 2 video)

Hollywood has its Golden Globes and its Oscars, but us humbler folks have the Razzies, an awards show created to honor the very worst in cinema. From painful movies to pathetic acting, the Razzies have spent more than three decades punishing the worst of the worst with a $5 award that’s glamorously spray-painted gold.
And last year, there was one clear frontrunner in the list of nominees: ‘The Twilight Saga: Breaking Dawn – Part 2.’

Kristen Stewart and Robert Pattinson were nominated for Worst Actress and Actor (respectively) in ‘Breaking Dawn,’ and they were also nominated as a pair for Worst Screen Couple.
Their ‘Breaking Dawn’ co-stars Taylor Lautner and Ashley Greene were nominated for Worst Supporting Actor and Actress honors, and Lautner also snagged a Worst Screen Couple nom alongside his toddler love interest Mackenzie Foy (who plays “little Renesmee”).
The film itself was nominated for Worst Picture, Worst Screen Ensemble and Worst Screenplay. In all, ‘Breaking Dawn’ picked up an impressive 11 nominations in 10 categories. And Stewart got even more Razzie love: She picked up a Worst Actress nod for ‘Snow White & the Huntsman,’ too.
Adam Sandler came in right behind ‘Breaking Dawn’ for the most nominations for his film (read: cinematic crap shoot) ‘That’s My Boy!.’ While ‘Twilight’ followed a drippy teenage girl skipping college so she could get married and have vampire babies, Sandler’s movie is about a middle-school boy who procreated with his teacher and had Andy Samberg.
Really, which is the lesser of two evils here? 0
Suck on that, Twilight!
But while the Razzies may sound like a serious source of embarrassment for the winners, a couple A-listers have shown up in person to collect their awards — and were supremely awesome while doing it. Watch Sandra Bullock (who won for ‘All About Steve’) and a NSFW Halle Berry (who picked up a trophy for ‘Catwoman’) in hilarious action below.