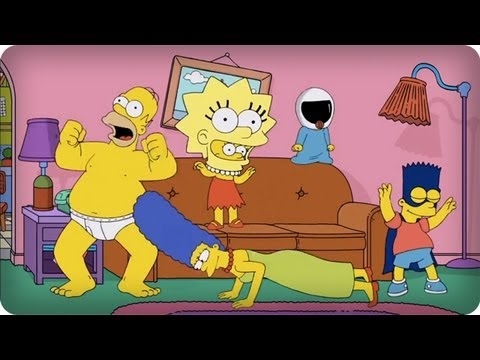 ‘The Simpsons’ Offer Up ‘The Homer Shake’

Finally, a Harlem Shake video for a new audience! Last night’s opening couch gag on ‘The Simpsons‘ showed everyone’s favorite cartoon family getting in on the Harlem Shake craze. And we definitely count it as a win.
Dubbed “The Homer Shake,” this video starts in typical Harlem Shake fashion with a helmet-wearing Maggie boogieing down while the rest of the Simpsons clan sat motionless. Of course, once the beat drops, they’re all up in dancing. Pretty soon, the scene pulls out to reveal TONS of ‘Simpsons’ favorites getting their groove on. Besides fan favorites like Ralph Wiggum and Duff Man, the scene also includes some rarely seen characters like Apu’s octuplets and The Grumple, the Grinch parody that menaced Homer in an episode.
As the YouTube description reads, “You’ve seen the rest, now watch the best! It’s The Simpsons Homer Shake!” ‘Nuff said!