10 apr 2013 14:29
2891
7
1
When watching a movie, most filmmakers are content with shoving all the information we need to understand a story right into our stupid faces. Because film is a medium designed for telling stories, right? Writers and directors don’t need to be coy about what it is they’re trying to say.
Unless what they’re trying to say is completely at your expense, of course, as is the case with most of the hidden messages we’ve assembled here (none of which are Disney entries, by the way, ’cause they’ve been done death elsewhere). Ask yourself, this, though: why did the filmmakers associated with these flicks take the time out of their busy schedules to ensure that these subtle inclusions made it into theatres?
The logical answer? To reward viewers patient enough to search for hidden clues, you say? Probably not. More than likely, it was all done to either make them feel good about themselves, or to ridicule our growing obsession with analysing each and every frame or everything we happen to gaze upon…

Here’s an inclusion that was actually intended to be something of a real message back when it was drawn up, although – like most things in life – it eventually turned out to mean absolutely nothing, ’cause the world hates us, and some unspecified cosmic force just never wants that Superman/Batman crossover to happen.

The movie in question here is I Am Legend, which starred Will Smith as “the last man on Earth,” who wanders a post-apocalyptic New York with his dog and drives fast cars and stuff. Look hard enough and – during one scene – you can see a poster for what looks to be a Superman/Batman crossover over, with a release date of 15 May 2010.

When this got out (and as you’ll imagine it would have), the world went crazy, only for the collective dreams of comic fans everywhere to be later shattered. Why was it included, then, you ask? Because I Am Legend producer, Akiva Goldsman, had once apparently been involved in such a project, only for it never have realised. This was included as a sort of semi-reference to such a memory. We hate you, Akiva. 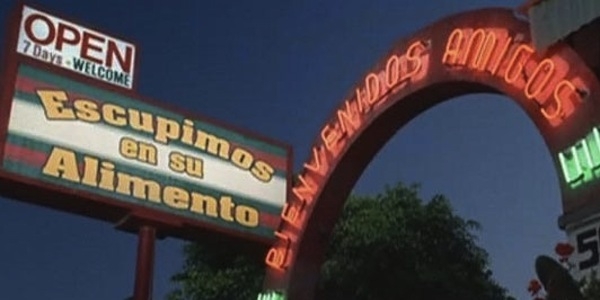 I refer you to the scene prior to the one where Ron Burgundy (as played by the one and only Will Ferrell) is fired for his recent outbursts, in which Veronica Corningstone (Christina Applegate) can be seen having dinner at a Mexican restaurant.

The name of the restaurant, we see, is the enigmatic “Escupimos en su Alimento.” Which, by the way, means “we spit in your food” in Spanish.

Here’s one that lots of people might have missed, though you’ll only catch this hidden message for the home DVD release. Once you’ve popped the disc into your player, you’ll be treated by an FBI warning (a general piracy warning if you’re in the UK). Business as usual. But wait a second, as the warning switches to something else.

Oh. Ahem. Well, although we could probably surmise that this little insult is more to do with the Bride’s “take no prisoners” attitude than one that is aimed directly at the public, it’s certainly possible this is a note from Tarantino, making fun of the fans who like to search his work for hidden messages… messages exactly like this one. 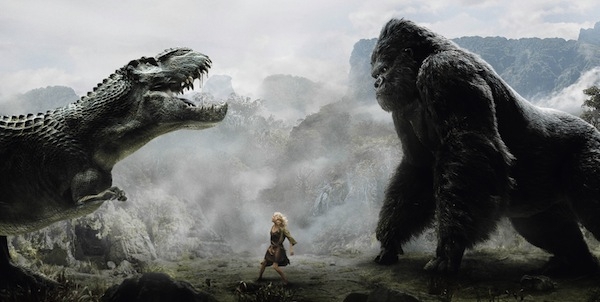 0
“Show Me The Monkey!” – King Kong (2005)
The scene in question, which takes liberty with your knowledge of morse code, by the way, comes at the very beginning, with the ship approaching the elusive Skull Island. A morse code message is suddenly received, which we are told is putting out a warrant from Carl Denham’s (Jack Black) arrest.

Nope. The real message translates to the hilarious “Show me the monkey!”, which will only not make sense if you don’t know what King Kong is. Anyway, this is why we should all brush out on dying languages, like morse code and, uh, Latin… in case Peter Jackson tries to trick us. Thankfully morse code machines don’t exist in The Hobbit.
“It’s Still Alive…” – Cloverfield (2008)

No need to feel bad if you missed this one, though, because the filmmakers decided to be super subtle about it: not only will you find it at the very end of the movie’s credits, its meaning can only be derived if you play it backwards. I don’t know who decided to do that first, but, uh, good work?

That’s to say, there’s a somewhat invincible ocean beast still trampling around New York, and I for one would like to know how the army went on to deal with something like that. I’m not saying we have to have a Cloverfield sequel or anything, but… Well, I am sort of saying that. Make a sequel. Please. 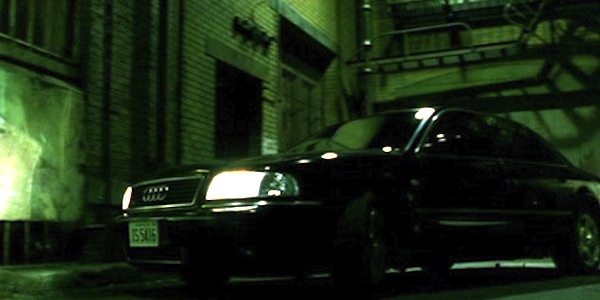 Agent Smith (Hugo Weaving) steps out of his sleek Audi A8. Take a look at the license plate, which reads IS 5416. In any other movie, that’d probably just be a series of random letters and numbers, wouldn’t it? But this is The Matrix, people, where license plates are shorthand for deep theological implications…

“IS 5416″ is actually a neat reference to a Bible passage, Isaiah 54:16: “Behold, I have created the smith that bloweth the coals in the fire, and that bringeth forth an instrument for his work…” So whereas some directors just use cars as tools to ship their characters from place to place, the Wachowskis are using them to to get, like, seriously deep…

Seriously. 'See You Next Wednesday' came to John Landis when he heard the line during a phone conversation in Stanley Kubrick’s 2001: A Space Odyssey. Since then, he’s included it somewhere in at least 12 of his movies and TV show ventures. Sometimes it’s a movie poster, at other times the words are referenced in unsubtle dialogue cues.

Will we ever see a full-length version of See You Next Wednesday? I surely hope so, because going by the poster above (as glimpsed in the comedy/musical the Blues Brothers), it’s about a giant gorilla going berserk downtown. Which is what all movies should be about, fundamentally.