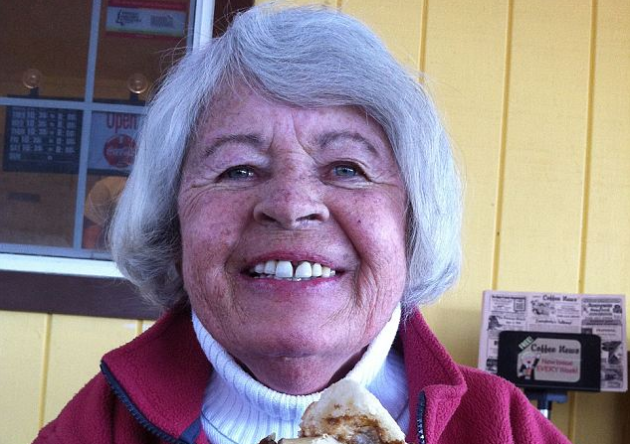 06 may 2013 13:08
829
2
We’re thinking Toni Larroux of Bay Saint Louis, MS., who died last week at 68, had a pretty quirky sense of humor. Her two surviving children certainly do.
From the first line of the obituary they penned for their mother — “Waffle House lost a loyal customer on April 30, 2013. Antonia W. ‘Toni’ Larroux died after a battle with multiple illnesses: lupus, rickets, scurvy, kidney disease and feline leukemia” — you are clued in that this is not going to be the typical remembrance.
As the obit progresses, the kids accuse mom of playing favorites, reveal unflattering nicknames, hint at illegitimate children and take shots at each other and other family members. The first local paper the Larrouxs submitted it to actually rejected the obit even though its conclusion, as well as its parenthetical phrasing, make it pretty clear that it is tongue-in-cheek.
But another paper agreed to print it, and its dark and often awkward comedy struck a chord with readers who have pushed it to go viral.
You can read the whole thing below. Do you think it goes too far? Or is it a fitting send off for a woman who obviously appreciated a good joke as much as a good waffle? 0
&quot;Waffle House lost a loyal customer on April 30, 2013. Antonia W. “Toni” Larroux died after a battle with multiple illnesses: lupus, rickets, scurvy, kidney disease and feline leukemia. She had previously conquered polio as a child contributing to her unusually petite ankles and the nickname “polio legs” given to her by her ex-husband, Jean F. Larroux, Jr. It should not be difficult to imagine the multiple reasons for their divorce 35+ years ago. Two children resulted from that marriage: Hayden Hoffman and Jean F. Larroux, III. Due to multiple, anonymous Mother’s Day cards which arrived each May, the children suspect there were other siblings but that has never been verified.

She is survived by the two confirmed, aforementioned children. Her favorite child, Jean III, eloped in college and married Kim Fulford who dearly loved Toni. They gave Toni three grandchildren: Jean IV, Ann Elizabeth and Hannah Grace. Toni often remarked that her son, Jean III, was “just like his father,” her ex-husband, Jean Jr., a statement that haunts her son to this day.

Hayden Hoffman married Stephen Hoffman of Charleston, WV. They reside in Bay St. Louis and carry the Larroux family torch forward through each and every Happy Hour, Mardi Gras and cocktail party. Steve’s quiet demeanor has provided ballast to an otherwise unstable family. They have two children: Charlie and Helen (the ‘well-behaved’ child Toni’s daughter, Hayden deserved to raise.)

Toni had four sisters: Patty the elder, Kitty the cook, Lisa the lawyer and Piji…the…piji. The sisters dearly loved Toni; spoke often and as one family photo proved, all preferred Clairol blonde in a box #47. They inherited their unique sense of humor from their father, Paul “P. Marvelous” White. He gave nicknames to all the girls such as “tittle mouse”, “kittycat”, “bouder bounce”, “spooker mcdougle” and “poodle pump.”

Toni previously served on the board of the Hancock County Library Foundation. Ironically, the only correspondence she has received from the library since her resignation has been overdue notices for several overdue books (a true statement.) Between ICU, dialysis and physical therapy she selfishly refused to make the time to return them. Her last words were, “tell them that the check is in the mail…” Toni retired from GE Plastics after Hurricane Katrina in 2007. She would undoubtedly cherish the thought of having the former smoking room named in her honor.
Any sendoff for Toni would not be complete without mentioning her lifelong buddy Myrtle Jane Wingo Haas and her adopted daughters Liz &amp; Laura. She considered Aaron Burrell to be a distant grandson (not distant enough) and had the ability with family pets to usher them toward heaven at an unrivaled pace. Her favorite activity was sipping hot tea on her back porch with friends seated around her porch ensemble from Dollar General (again, not kidding.) This will be sold to the highest bidder at her garage ‘estate’ sale. Any gifts in her honor should be made to the Hancock County Library Foundation (to the overdue book fund.)

Visitation will be held at Edmond Fahey Funeral Home in Bay St. Louis, Mississippi on Saturday, May 4th at 9:30 a.m. Her memorial service will begin at 11:00 a.m. (another true statement.) It will be led by Rev. Curt Moore of Orlando, Florida, a questionable choice for any spiritual event, but one the family felt would be appropriate due to the fact that every time Toni heard Curt preach she prayed for Jesus to return at that very moment.

On a last but serious note, the woman who loved life and taught her children to ‘laugh at the days to come’ is now safely in the arms of Jesus and dancing at the wedding feast of the Lamb. She will be missed as a mother, friend and grandmother. Anyone wearing black will not be admitted to the memorial. She is not dead. She is alive.

Edmond Fahey Funeral Home is in charge of the arrangements.”