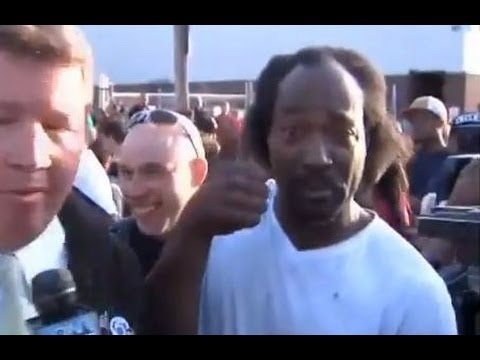 07 may 2013 16:27
775
3
Charles Ramsey is a hero after freeing three women who had been kidnapped and held captive by his neighbor for 10 years. The Cleveland, Ohio man has also quickly become a viral video star after giving a series of descriptive interviews about the rescue.
“I barbecued with this dude! We ate ribs and whatnot, and listened to salsa music,” Ramsey explained when describing neighbor Ariel Castro. Castro now stands accused of kidnapping Amanda Berry, Gina DeJesus and Michelle Knight, who have all gone missing over the past decade.
It was Berry, whose disappearance in 2003 was big news in Cleveland, that Ramsey heard screaming, and then freed from a partially locked door by kicking it in. While it took a little while for Ramsey to realize this was the Amanda Berry, he knew from the get-go something was seriously amiss.
“I knew something was wrong when a little pretty white girl ran into a black man’s arms. Something is wrong here. Dead giveaway,” he told local reporters.
In addition to his interviews, Ramsey also proved to be quite entertaining on the 911 call he placed after freeing Berry — which led to DeJesus and Knight being rescued. That NSFW recording is below, and after you listen to it we think you’ll agree that Ramsey needs to get the auto-tune treatment and a hefty endorsement from McDonald’s.