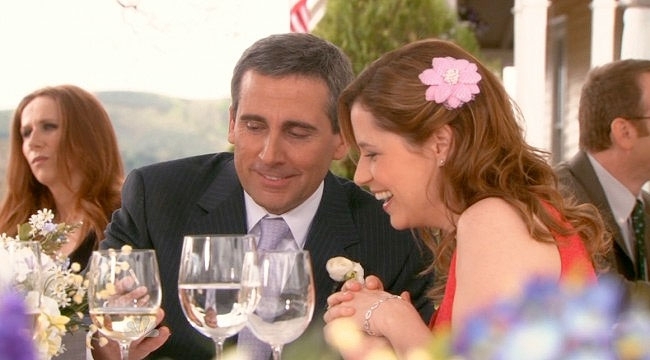 Of the hundreds of reasons why NBC's The Office was so beloved and so great for so long, the one that always stuck out the most was its reliability. We've all been there: sh*tty job, sh*tty town, sh*tty boss, sh*tty life. For most of us, life isn't going to be easy; you have to make the most of a bad situation, a point Jim Halpert brought up during the talking head montage at the end of last night's The Office's series finale. "Everything I have," he said, speaking as much to the camera crew as himself, "I owe to this job...this stupid, wonderful, boring, amazing job." There was a lot of "stupid" and "boring" in "Finale," but there was just as much, if not more, "wonderful" and "amazing." We want good things to happen to the people we've spent nine years with, and nearly everyone was given their happy endings: Michael has kids with Holly, Dwight and Angela are married, Jim and Pam are moving to Austin for Athlead, excuse me, Athleap, Stanley's officially changed his name to Florida Stanley. But much of the episode felt a little too convenient (since when are Dwight and Kevin friends?), too self-congratulatory (the crowd cheering for Andy, even though we're the crowd and would boo that Baby Wawa; plus, that Auto-Tune remix yikes), too mawkish (Erin reuniting with her birth parents) for it to be truly great. Then again, even at its best, The Office, with its tricky mix of heart of humor, was always slightly sloppy. That was often part of its charm, though; if the show had been too perfect, it wouldn't have resonated the way it did, and this rose-colored episode was "too perfect." (I initially didn't like the Michael Scott appearance because of how inconsequential it felt, until I realized that was the point: he's not the Michael Scott we know anymore; he finally realized not all parties are for him.) "Finale" may have played well in the moment, but I don't think it's one of The Office's greatest moments. But hey, at least we'll have seasons two-seven to come on back to, and yes, that's what she said.