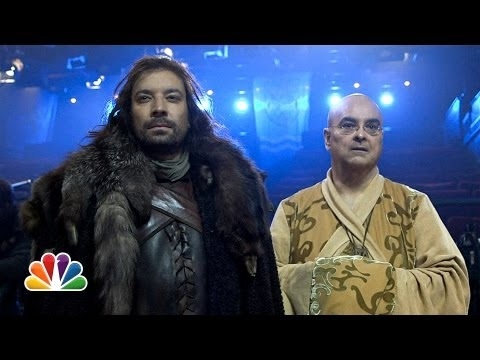 28 may 2013 11:37
508
1
If you’re at all a fan of ‘Late Night with Jimmy Fallon‘ then you are well aware of the heavily anticipated ‘Game of Desks’ digital original. The video aired this past Friday, and as you’d imagine, it did not disappoint.
The short was made as a spoof to the popular HBO series ‘Game of Thrones,’ and has all of the fan favored characters. Yet as great as it was watching Fallon impersonate both Ned Stark and Daenerys Targaryen, our favorite moment might be the ending tie-ins dealing with soon-to-be-’Late Night’ host Seth Meyers and Jay Leno, whom Jimmy is replacing on ‘The Tonight Show.’ Perhaps the late night talk show world isn’t too different from the realm of Westeros (without all the murder, obviously).