We already knew Mitch Hurwitz wanted to do another installment of Arrested Development, and we knew that Netflix was likely to renew the series, but certainty is always appreciated, especially when we still have some many open questions. Certainty is what we got from Mitch Hurwitz, who — when asked Just For Laughs comedy festival in Montreal if the show would be back — said “Definitely.” Then, turning to Netflix chief content officer Ted Sarandos, he said: ‘I don’t want to get into a whole negotiation right now… but I’ve got a family to feed.’ I can also confirm that Hurwitz does, indeed, have a family; he’s married to the lovely actress Mary Jo Keenan, and they have two daughters, May and Phoebe, the portmanteau of which equals “Maebe.” What Hurwitz is still waffling about, however, is in what form the series will return. From Chortle: ‘I kinda go back and forth between [a movie] and a series. But here’s the most important thing, whatever we do, I want to get the cast all together and not do another anthology thing, and that’s why I keep thinking about kicking off with a special or a three-part show and then going into a series. Then he asked Sarandos: ‘Are you game for that?’. ‘Absolutely,’ the Netflix boss replied. ‘In any form.’ Hurwitz also noted that they now have “the right idea” to take the next step, and I given the exchange, it seems that, even if it’s a movie, it’ll premiere on Netflix (and not in theaters). My only question is how they’re going to work around the Arrested Development movie within the movie being Ron Howard’s next Da Vinci Code when Ron Howard has already signed on to do the next Da Vinci Code. 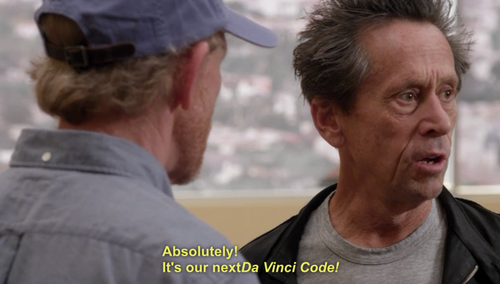