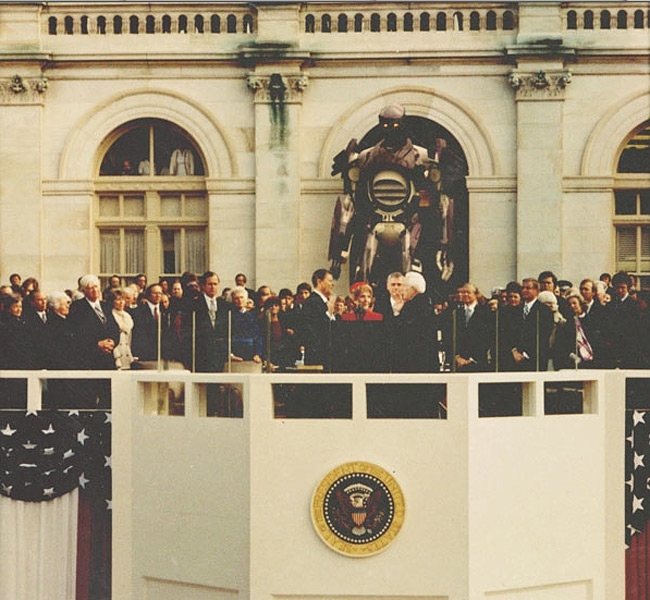 30 jul 2013 16:59
752
3
1
Hot off the big Sentinel head reveal at Comic-Con last week (hot upskirt NSFW Sentinel pics!), the upcoming, Bryan Singer-directed X-Men: Days of Future Past is further updating their Trask Industries viral site with more media, including new Sentinel stills and a portrait of Peter Dinklage as Bolivar Trask. This nerd I beat up told me that in the comics, Trask Industries is a conglomerate owned by Dinklage’s character, tasked with building the giant robots to keep the world safe from mutants. I assume they’re not made of metal, or else Magneto would probably just do that “why you hitting yourself” thing and throw them into the sewer.
Of course, depicting a Sentinel at the Reagan inauguration creates some continuity problems (*big inhaler puff*). As Movies.com writes:
So now the movie has established that the US had these anti-mutant robots in 1981. If that’s the case, then why is there no mention of them in Bryan Singer’s first X-Men? In that world, mutants are still in hiding, but there isn’t the kind of anti-mutant sentiment you’d expect from a nation that 20 years early built giant robots to trap mutants. So where’d they go?
That said, the story also involves time travel, so continuity issues will presumably be easily explained, preferably with Doc Brown diagramming the parallel timelines on a chalkboard. That’s what I’m hoping for, anyway. That, and the Sentinels tearing down the Berlin Wall intercut with footage of Reagan riding his horse and cutting taxes, all set to Jesus Jones. Reagan and alternate history are a match made in heaven.